Just about everyone has either made or seen paper kites at some stage in their lives.

The categories below are full of interesting information on many kinds of unusual kites. In fact, some of these categories are a bit odd! Like the funny kites or the zero-line variety, which are controlled by a radio transmitter. Since so many people design kites, there is huge variety to be seen, even within each category. 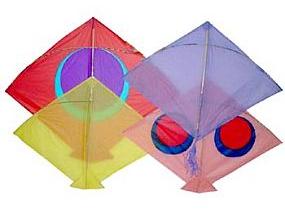 There is such variety in kites that have paper sails, let alone single-liners in general. There's everything from the classic Western diamond-shape kite to Oriental fish-kites to Maori kites.

Even parafoils can be seen floating at the end of a single string. These ready-to-fly designs tend to be much simpler and cheaper than the steerable kites used by stunt flyers or board riders.

Half the fun of single-line kites these days is just the way they look, not just the way they fly! I guess looks count more for young kids, while flying characteristics charm the older flyers. But there are always exceptions.

What do you get out of single-line paper kites or any kind for that matter?

I can remember buying and flying an Indian kite while in high school. Made of tissue and bamboo, it flew extremely well! It was quite similar to those authentic square paper kites in the picture.

Unfortunately, my own fragile Indian kite didn't fare too well when Cyclone (Hurricane) Tracy almost wiped Darwin off the map on Christmas day in 1974!

That would have been a great night to try a concrete box kite. You'd need high-tensile fencing wire as flying line ;-)

The photo shows a tiny sled which I designed and made from a single sheet of A4 copier paper. That's quite close to Letter size in the USA. 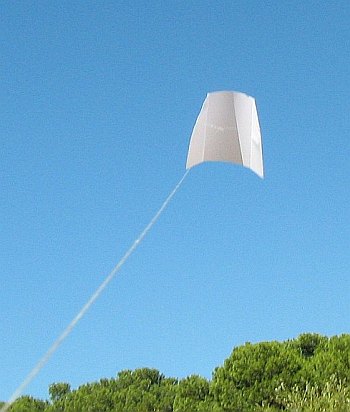 Now, read about some things you never knew:

3D kites of all types

Now, this is a page about miscellaneous single-line kite topics—not just paper kites. Hence, a page about finding good kite clip art belongs here as much as anywhere else on this site!

Talking about clip art or line art... For kids, and apparently some adults too, :-) here's my kite coloring page. It features all my Indoor Series designs. Being fairly accurate, they look a bit like plans but are actually created just for coloring in. Grab your markers and have some fun!

After hearing about the book and the movie, have you ever been curious about kite running? Wonder no more. Also, read up on the North American kite fighting scene.

Here's one for any school kids learning about science. The Benjamin Franklin kite was a feasible design that might have been flown by Mr. Franklin himself! In case you want to make one for yourself, you can try my instructions for making a Ben Franklin kite replica. That page has historical info as well.

There's nothing like a kite festival for checking out colorful kites! We've taken the odd photo at these types of events.

If you keep your eyes peeled at a festival, you might find some rather unusual kite shapes. Some of these are one-of-a-kind though, so don't expect to ever see them all!

Are you interested in a somewhat long and detailed history of kites? It's actually a compilation of other historical info on this site. On the subject of history, kite museums exist all around the world. These feature almost as much variety in style and function as the kites themselves!

Also read about flying kites in the 1950s, if you are in the mood for more history. The article is by a guest writer who was there!

Glenn Davison is an eco-artist and workshop leader who has been featured on HGTV as a New England Craftsman. He is the editor of the books, "Kites in the Classroom," "How to Fly a Kite," and the "Guide to Building Miniature Kites." And there have been a few more since!

Anthony Thyssen was a systems programmer with Griffith University in Brisbane, Australia. In his spare time, Anthony has tinkered long-term with single-line kites and kite messengers. Consequently, he has built up an extensive website of useful kite-making and kite-related information. His impressively old site is also a fascinating portal into other people's resources on kites and kite-related activities. In times past, Anthony has been a newsletter editor and webmaster for the Queensland Kite Flyers Society.

A question that people often ask is Who invented the kite? Since almost all kites over 200 years old no longer exist, finding the answer comes down to careful research of ancient documents.

Making a kite starts with choosing which kind of design you to want to build! There's a fair amount of choice available on this site—just check out the Kite Making section up there in the menu!

Paper Kites From China to Java

Are you interested in some history on how kites spread throughout the non-western world, centuries before they became popular in the West? The very first kites flew in China, thousands of years ago. 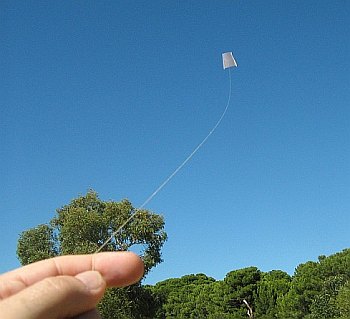 Just 1 sheet of copier paper, but it flies!

At some early stage, the idea spread to Japan and Korea as well. Eventually, paper kites were to be found in Southeast Asia too, and the spread continued down the Malay Peninsula. We're still talking 2000 years ago at this point! Hopping from island to island in people's canoes, the simple single-line kite idea then continued to move through Indonesia, Melanesia, and Polynesia. Bark took the place of paper in these kites. Come to think of it, there's actually an Australian native tree called the paperbark!

Near the end of this chain of countries lies Australia, where I'm typing this right now. No doubt, we got our first paper kites from English settlers and possibly convicts in the 18th century. The original aboriginal population had a number of remarkable inventions, but as far as I know, they didn't fly kites.

In more recent times, kite flyers over here have been influenced by the kite-flying activities of our Asian neighbors. These countries are just a few hours away by air, to the northwest.

Now, for something completely different, see the photo. It's another look at the MBK Minimum Sled, made from a single sheet of copier paper, with folds acting as spars!