From China to Bali

Traditional Asian kites tend to feature a lot of art! Either the entire kite itself is a work of art, like the Chinese dragon, or the surface of the kite is used as an artist's canvas—like the big Japanese rokkakus featuring ferocious faces. In between are hundreds (if not thousands) of other designs which feature intricate or simply beautiful artwork over the sail. For example, there is the wau bulan from Malaysia, which we have been fortunate enough to see up close. 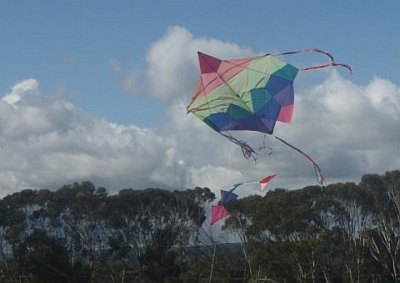 Not authentic, but Asian inspired!

Some Asian cultures have focused more on fighting kites which naturally are built with flying performance in mind. But they still tend to be attractive craft to look at, just with bolder and simpler artwork. These include kites from India and Korea. Japan also could be included, although there is less emphasis on fighting with kites over there.

It would be possible to literally write volumes about the kites of Asia. But this page will just aim to give you a sense of how the style and look of traditional kites vary across the Asian nations. I've probably left a few out that are less well known. There are quite a few nations in South-East Asia and I'm guessing kites have flown in every one of them over the last few centuries.

I'll go light on history here, but a bit of such info does go hand in hand with anything traditional doesn't it ;-)

Although Western kites dominate in the online stores, modern-material replicas or faithful recreations of traditional Asian kites will be around for a long time yet. Some keen master kite-makers out there are determined to keep the old skills alive! Much of this is being coordinated on social media.

A handful of kite experts in China oversee the production and export of a steady stream of replicas to overseas buyers.

How to put in order the countries covered below? Well, it seemed logical to go north to south, since that's largely how kites spread out from China in the first place! 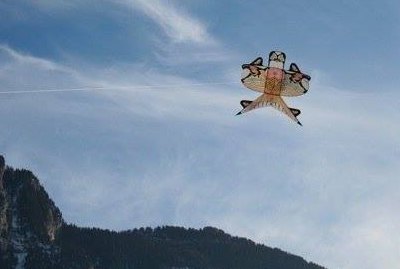 In the very early days (BC), kites were seen as a military technology, believe it or not. Just as balloons and aircraft were used for reconnaissance during the second millennium (1000AD–2000AD), there were documented attempts by Chinese generals to get observers in the air under (or on) large kites.

As the centuries passed, kite flying in China became a national pastime. Creature kites were the most popular, in soft-winged, rigid-winged, and centipede configurations. Intricate and colorful art abounded in the designs.

The best and most expensive Chinese kites were made of split bamboo and silk.

To this day, replicas of the old traditional designs are being made and shipped all over the world—like that swallow kite in the photo.

The Edo era is often mentioned where Japanese kites are discussed. During this time, from the 18th century onward, various regions of the country developed and became known for kite designs that were specific to the region. 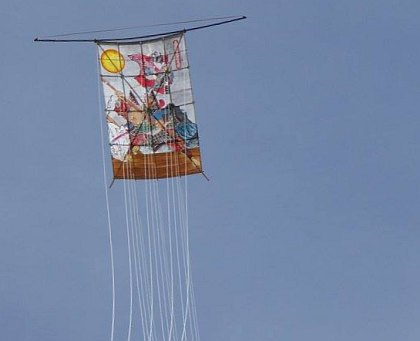 A good kite was one that flew without needing a tail for stability. This required accuracy, symmetry, and light weight in construction.

"Edo" can also refer to the very first kite design local to Japan, a simple rectangular lattice of bamboo strips covered with paper. This frame was curved in a way which gave the kite stability in the air—just like a dihedral angle works in modern kites.

As in China, some individuals would devote almost their entire lifetime to the highly skilled production of craft that looked good and flew even better!

I have met a modern-day Japanese kite-master—Mikio Toki. The encounter was brief. Mikio looked up and inquisitively studied my big Multi-Dowel Barn Door flying at the Adelaide kite festival one year. The kite actually wasn't that much to look at; at least it had no tail and flew very steadily ;-)

Old Japanese kites often feature scenes, figures, or just the faces of human characters. We saw a group of authentic and quite large rokkakus once at the local kite-festival, each featuring a ferocious warrior-style face. 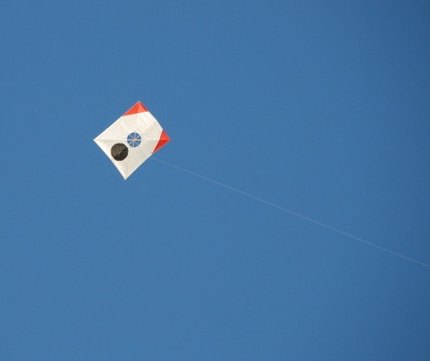 This is another fighter-kite nation! Just like the first Japanese design, the most well-known kites from Korea are rectangular. But the similarity stops there, since these designs have crossed diagonal spars and a large circular hole in the center.

Two types (by shape) predominate, the rectangular with holes and the diamond:

I've seen photos of several Bangpae yeon flying on a single line, with fairly short looped tails. I like to put up a "kite train" as it's called too—but with diamonds (steadied by drogues) instead of Asian kites.

India is the home of the patang, the legendary fighting kite that has been exported and copied elsewhere in the world. 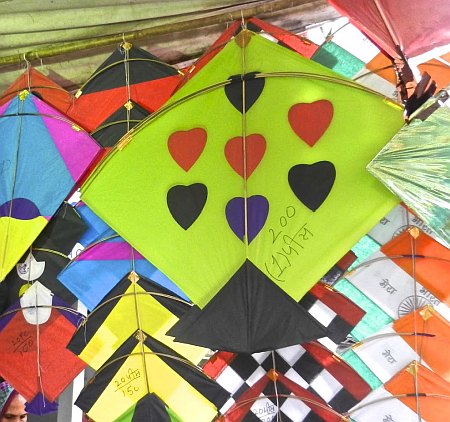 In my first year at high school, I bought from a store an "Indian kite" that looked similar in design to the patang and had several light streamers as a tail. And what an awesome flyer it was! I will never forget my surprise and pleasure at seeing the bamboo-and-tissue craft pop up super-steep in a light breeze, out on a vacant block one day. Within months, I would lose it when Cyclone Tracy came through and leveled the entire city, but that's another story.

The patang is made in several variations, including some quite small kites. And there are other types, but there is one noticeable common feature... A curved horizontal spar crosses the vertical spar quite close to the nose end of the kite before extending down to the side corners of the sail.

I remember an Indian man enthusiastically handling a tiny fighter on a long length of thread at our local kite-festival one time. He was practically working up a sweat :-)

Other Indian kites feature rectangular areas of sail in various configurations. These are not fighters but instead are often a handy canvas for decoration or images of people. Most notably, images of politicians appear before elections! 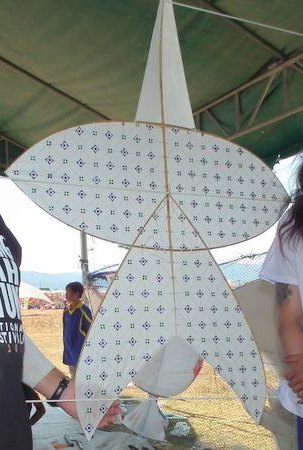 The common ancestry of some Asian kites is apparent in the use of pointy wingtips. For example, compare the kites of Thailand, Vietnam, and Malaysia. But never-the-less there are features distinctive of the country of origin.

I'll mention two common types of Thai kite here, both of which are used in kite-fighting:

This is just the tip of the iceberg since there are many other types and variations of kites in Thailand.

Traditional kite-festivals abound, although people no longer have the time to fly these Asian kites for weeks or months on end as in the old days! Apparently. 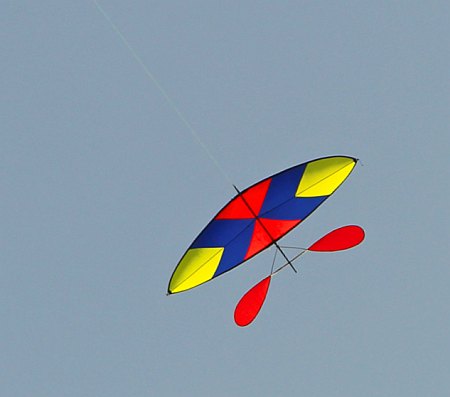 This country has a kite culture that extends back to around 1000 AD!

A unique aspect of this is the existence of Ba Duong Noi village, in the Dan Phuong district of Hanoi. Kite making and flying has been going on here—pretty much continuously—for over 1000 years. The characteristic design, the diều sáo, has remained unchanged as well. It's an elegant flying wing that, despite its simple appearance, requires considerable skill and finesse to construct well. Frames use split bamboo, and coverings are from paper.

In other regions of the country, the pointed-tip style of wing remains, but there is great variety in tail sections and paddle-like tail structures. Modern materials are also incorporated as people find new and practical ways to re-express the traditional flying craft.

Bamboo flutes that make soft sounds in the airflow over the top of the kite are an integral part of the traditional kite-flying exercise. This feature, or a set of taut strings that vibrate to make sound, is sometimes seen in other Asian kites as well. 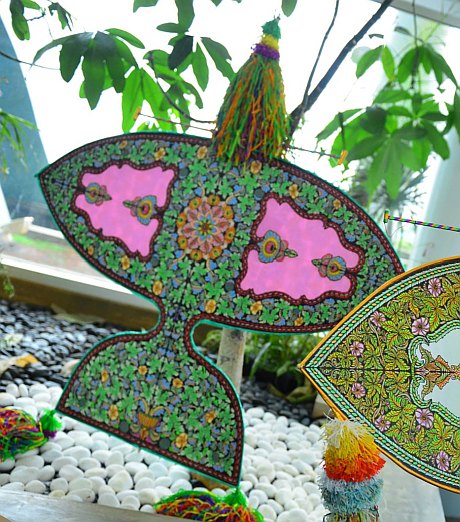 In a similar way to Japan, various regions of this sprawling island nation are each known for a particular type of kite.

The most well-known design has to be the wau bulan, or "moon kite". In common with most Thai and Vietnamese kites, it has those pointy wingtips. A tail section is in the shape of the crescent moon and elaborate tassles are often trailed from the tips of wings and/or tail.

We saw some great examples of the wau bulan at the Adelaide kite festival one year. The elaborate and intricate decoration was one thing, but I was personally most impressed with how efficiently the kite flew! It was doing better than most of the large deltas on the day.

Come to think of it, traditional Asian kites don't seem to get a big showing at our festival. They tend to pull plenty of eyeballs when they do make an appearance though.

Here are the names of the main wau-kite variations, which all have the same basic wing shape: 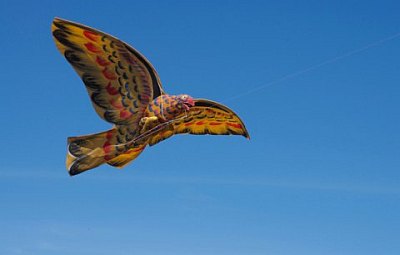 I'll just mention the Bali kites here, since they have really made a splash on the global stage! Kids and adults alike have been making simple kites for a long time on this tropical Indonesian island. But in recent decades the place has become known for creating realistic colorful creature kites and selling them to tourists. The kites are also available for sale online.

I have flown one of these myself, just to get some photos. There's my Bali eagle in the photo. Flying performance was rather modest, but at least it looked good in flight! The kite would glide around on a slack line too, which added to its realism.

Traditional Balinese kites also include some very large sparred craft which are flown with incredibly long ribbon tails. You can see a number of these in the air at once at the annual kite festival over there, weather permitting of course.