We once saw a Wau kite at a local kite festival, and it was amazing to see the decoration closeup. That's not to mention the impressive flying characteristics of this kite and another similar example, which was also brought along.

This page is a quick look at the five main types of these kites from Malaysia. There's more info than pictures actually, but there's a link further down which takes you to a ton of great images!

Apparently, the decoration on early kites was influenced by Malay wood carvings. In fact, the kites themselves are said to have been developed by wood carvers who also came up with the method of decoration. 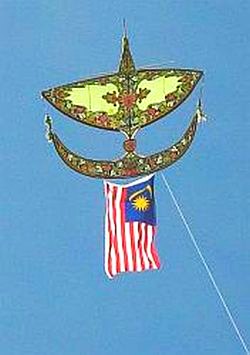 In a somewhat unique process, designs are traced onto paper or tissue before being carefully cut out. The piece with the hole in it is then pasted onto the kite! After many such pieces of different colors are applied, intricate patterns emerge. Shiny foil paper is commonly used, to get the vibrant and complex effect.

The photo, with the flag trailing, is of the kite we saw at the Adelaide International Kite Festival.

In the center of most of these kites is a large flowery symbol, called the Ibu or Mother of all Life. If it's not there, the kite isn't considered to be traditional. Also, traditional designs feature a vine coming out of a vase or flower pot at the base of the kite. Leaves and flowers must be included.

One type of Wau that has its origins in neighboring Indonesia is painted rather than stuck with tissue and foil. There's more on that one further down.

See that long horizontal stick near the nose of the kite in the photo? That is a bow from which is strung a tape or line which vibrates in the wind—a hummer. Originally, these kites were flown with very long hummers. Farmers were in the habit of putting up a kite or two to fly all night while they stayed in a shack among their rice paddies. Sometimes this was for days at a time, so they had plenty of time for kite making!

Besides helping the farmer to doze off at night, the sound of the hummer was believed to frighten away evil spirits. Some even used the patterns of sound to forecast the following day's weather!

The Five Types of Wau

This is also known as the "moon kite" since the crescent-shaped lower sail looks a little like a moon in the sky. It comes from the state of Kelantan. It also has the status of being one of Malaysia's national symbols. As such, it featured on the reverse side of the Malaysian fifty-cent coin in 1989.

This type has curved leading and trailing edges, coming to a pointed tip on each side. On some examples, there are blank spaces on either side which are called the "eyes." According to folklore, these help guide the kite in flight!

The wau bulan is bigger than other traditional Malaysian kites. Typical examples are 2.5 meters (8 feet) wide and 3.5 meters (11 feet) tall. The two we saw were certainly around this size.

This is also known as the "woman kite," although considerable imagination is required to see why, from its shape!

The tail of this kite is similar to the budi leaf which is found in Kedah. "Jala" means "net" and refers to the tail structure.

This means "cat kite." When viewed from the back, there is apparently a similarity to a sitting cat and hence the name.

In keeping with this, some of these have their hummers tuned to screech and yowl like a cat in the dead of night! One of these days I need to add sound files to this website, so I can illustrate stuff like this.

Known as the "leaf kite," this design is similar to the bulan version but is wider and does not generally have a hummer. Being painted rather than stuck with colored paper, the artists tend to be more creative and less bound to traditional guidelines with their designs. Additionally, artists who use Batik techniques are often used to do the decoration.

Interestingly, there must be some weight savings here, since these kites are able to stay up in lighter winds than the other designs. I guess the weight of all those layers of glue or paste add up! Since the winds are often lightest early in the day, this design is also called the "early morning kite" or just "morning kite."

The "peacock kite" has a tail rather than a lower sail. Seeing a picture of one of these reminded me of the tail of a wedge-tailed eagle. This kite is local to the Johor province of Malaysia. Funnily enough, it's not readily accepted into official competitions outside Johor. That's because its origins actually go back to Sulawesi, Indonesia, where it is flown mainly by the Bugis people.

This variation has a hummer like most of the others, but it's something special! Seven different sounds can be made, and it used to be flown at night to accentuate the effect of beautiful noises from above. Does it use multiple strings, tuned to different pitches? I don't know.

Now, I know you are hanging out to see some pictures of these incredibly visual kites, so here is a link that I think you will enjoy!