These KAP reports document what happened when some aerial photography was done in our state of South Australia, over a period of several years. 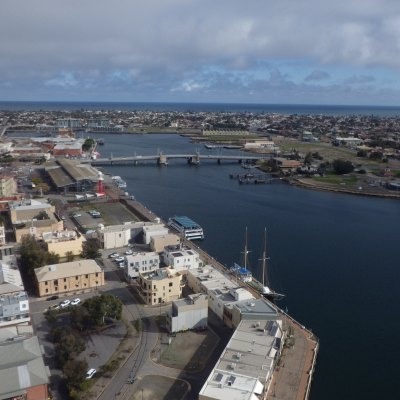 The Multi-Dowel Barn Door kite used to see most of the action, with the Multi-Dowel Sled getting pulled out in winds that were too light for the barn door.

A Fresh Wind Sled was also created (which has a zero rig-time and a wide wind-range) and it ended up doing the bulk of my aerial photography flights. I still pull it out occasionally, particularly at the annual kite festival! In fact, that Port Adelaide photo was taken under the Fresh Wind Sled kite.

There's the huge barn door in the photo further down. A test weight is suspended in a bamboo tetrahedron which was my first idea for a camera cradle.

The Multi-Dowel Barn Door tended to struggle above the 28 kph mark, so another design was created. This Fresh Wind Barn Door (as I called it) used the same diameter dowel, but had much less sail area and a whopping big hole in the center. It flew right up into the 30 to 40 kph range.

Although suited to stronger winds, the Multi-Dowel Box kite proved awkward for KAP. The big traditional box design had a much longer setup time and was prone to sinking out to the grass while you were trying to get the camera into its cradle! However, it did successfully loft the camera rig on one occasion when the average wind strength was high enough.

After several different ideas were tried for making a KAP cradle, a simple solution based on bamboo BBQ skewers proved most practical. There it is in the photo. 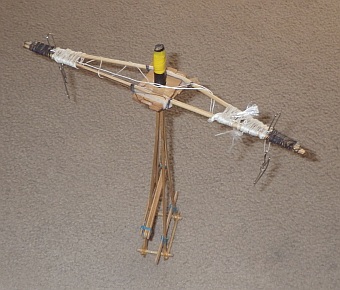 The bamboo rig had these features:

Once at a flying location, this rig was lofted several times if required, to capture a different point of view each time. My standard sequence ended up being 20 frames at 10-second intervals.

KAP Reports From Around Adelaide

And sometimes I went beyond the metropolitan area. Adelaide is the capital city of South Australia, one of the windiest states of Australia. Still, you occasionally can't loft a camera at all, due to "no wind"! Perhaps a large R/C blimp would have come in handy on those days. 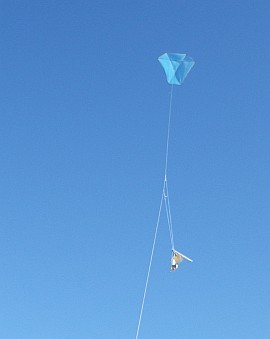 OK, here are the KAP reports. The most recent ones are first, although they are now all receding slowly into the past: