We built and flew many different types of kites that are known in the West, as you probably know by now. Not all of them originated in the West though. 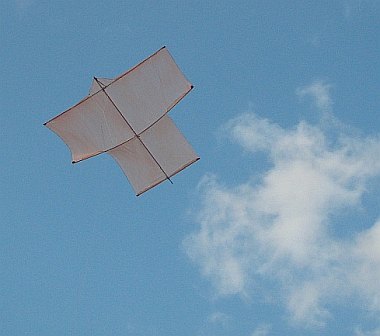 On this page, the focus is definitely on single-liners, and "flat" kites in particular. However, I like to include designs with bowed spars or dihedral in the "flat" category. And also deltas are included, despite the small amount of billow in their sails which helps to keep them stable.

A couple of these types, the diamond and the delta, are almost household names now. This is particularly true during April in the USA, when it is officially "kite month" over there!

Even in China, where kites have been popular for many centuries, the diamond and delta from the West are catching on and being absorbed into the local kite culture.

Apart from those two types, we hope you enjoy getting educated about some others that are not quite as well known. For example, there are two Japanese designs, the rokkaku and the sode (which you can see in the photo).

In terms of popularity and sheer numbers, the sled kite is up there in the Big Three—sleds, diamonds, and deltas.

I've never seen a truly large sled of the two-stick variety, but have often seen smaller ones flying here and there. Usually, these kites have inflatable spars (as in the photo) and can be seen in parks, down at the beach, or even at kite festivals.

This entire web site started out by featuring a humble little $5 all-plastic sled we bought for our toddler! It's still out there in the back shed.

A bit of research on these types of kites turned up an amazing variety of configurations for such a seemingly simple design. There were features such as extra spars, vents, cutouts, you name it. Whatever its exact form, the attractive thing about these kites is the built-in transportability and instant setup—pure convenience.

The flying performance of store-bought sled kites tends to be modest, but that doesn't bother the people who fly them! 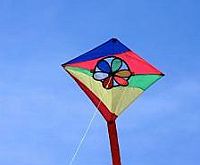 I can't help noticing how often we are bombarded with images of this design in daily life. These types of kites are everywhere.

It seems every second kid's show on TV and every second children's book has an image or three of this extremely well-known kite shape. It seems that, in the West at least, the word "kite" is almost synonymous with the shape "diamond."

As a family, we have often seen a diamond kite of some description floating on the breeze. Usually, the person taking an opportunity to fly a kite is hidden by the houses and trees of suburbia here in Adelaide.

Interestingly, all our building and flying of simple diamonds has underscored the basic reliability and idiot-proof nature of these types of kites! Many other designs can have their quirks and give trouble when built from scratch by inexperienced flyers. No wonder the diamond is so popular. The larger ones which break down for transport are very quick to set up too.

With accurately-made modern materials, diamond kites can have quite a good wind-range, although they don't necessarily fly at very steep line-angles.

In some corners of the world, you might hear a diamond referred to as an Eddy kite. There are a number of similarities! 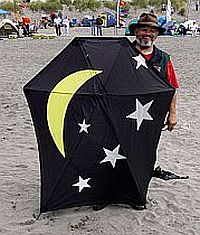 With so many visitors from the USA passing through this site, it's appropriate to include a design that apparently originated in that country.

The three-spar barn door doesn't make it into my top three types of kites. However, a little browsing around the Web reveals that a number of keen kite people take pride in making and flying large examples of these types of kites.

I have to admit, I've never seen a barn-door kite flying here in Australia! Apart from our own MBK versions of course. There must be a few around though, since the term "three-sticker" has been in use for many years.

Both our own bamboo-skewer designs are very much at home in fresh breezes, although we fly them both with tails. Larger barn doors are able to fly tailless, at least in light-to-moderate winds.

Our largest barn door, at 2.4-meters (8-foot) span, has been our best all-round lifter kite for kite aerial photography (KAP). 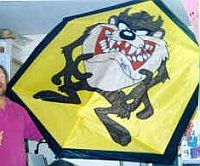 The rokkaku kite, often abbreviated to just "rok," has to be the most copied Japanese kite in the West.

These types of kites are everywhere, from small ones turned out from children's kite-making workshops right through to large expensive air-brushed versions for sale in kite shops. There's always a few big roks floating around at our local kite festival each year.

Like the diamond and delta, the flying characteristics of rokkakus have a lot to do with the considerable popularity of this design! That's just in my humble opinion. However, they don't quite make the big three.

I've seen a rok battle at a kite festival and have to say it's not a bad spectator sport! The competitors try to force all the other kites to the ground, in any way they can. Well, perhaps not quite—I'm sure firearms would be against the rules ;-) Personally, I'm not so much into kite fighting and prefer to fly my rokkakus up to 400 feet in light wind and thermal conditions.

Rokkaku kites are quite forgiving to construct and fly. They are very stable and a tail is needed only for some of the tiniest versions—like the 29 cm (11 1/2 in.) MBK 1-Skewer Rok. The larger roks can be built for light conditions only, like mine, or for more testing conditions like those used for modern rok battles. 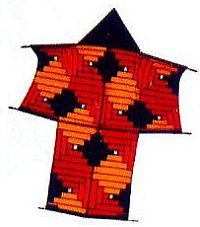 The sode kite, otherwise known as the kimono kite due to its resemblance to that Japanese garment, has often been copied in the West. It's not unknown for a large sode to be spotted at a kite festival. The rectangular areas of sail make a good canvas for artistic expression!

Our homemade sodes are great light-wind flyers and gain height easily in thermals, just like deltas do.

The Japanese originals fly without tails, and use washi paper for the sails. Apparently, some tragically keen Japanese flyers still make their own washi paper from mulberry bushes. Beat that for "building from scratch"!

Sodes can seem quite flimsy when being handled on the ground, but these types of kites fly very steadily up high. 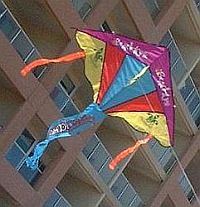 The delta kite is number three of The Big Three! Of all the different types of kites, this type is most commonly recommended to beginners by shops and festival commentators, for good reason.

The delta is easy to launch, flies on the lightest of breezes, and almost always sits at a good steep line-angle. These characteristics have pushed along the popularity of this design to huge levels, despite having only a fraction of the history of the diamond and perhaps even the sled kite.

The vast majority of delta kites are bought from a shop, since they are not nearly as straightforward to construct as the diamond or sled. However, building delta kites can be very rewarding, as I can attest!

Our experience of deltas has uncovered a tendency for them to get unpredictable in gusty or fresh winds. However, in light winds or stronger smooth breezes they are truly wonderful flyers.

Dan Leigh has been designing light-wind kites since 1974 and specializes in the delta configuration. Customers rave about the quality and performance of Dan's delta kites. Mind you, they don't come cheap! 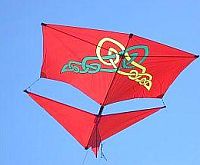 It's not a super-popular design now, but there are people out there who really love their rollers!

The roller kite has its roots in pre-War Germany. It's an efficient light-wind kite that can be adjusted for flying in stronger winds.

With its tailless design and steep flying-angles, this kite is handy for flying in confined areas.

Our MBK designs are reliable flyers, based on the Pearson Roller, with the 2-Skewer Roller quite capable of going overhead on 90 meters (300 feet) of line. That's despite its very modest size. The even smaller 1-Skewer Roller once caught the eye of a German blogger who marveled at how a roller could be so cheap!

I have a sneaking suspicion that roller kites are more liked and well known in Germany and other parts of Europe than elsewhere on the planet. After all, that's where the basic concept originated.

Hardly a common design, the dopero kite is however much appreciated with the KAP crowd. This design is capable of hoisting camera gear aloft in light winds better than other designs of similar sail area.

The original kite was actually inspired by the idea of overlapping two Pearson Rollers. Hence, the DOuble PEarson ROller or DOPERO.

Our Doperos are rather loosely based on the original! These types of kites generally have drag pockets under the trailing edge but ours have twin keels. Also, ours have much lower aspect ratios. To put that in entirely non-technical language, ours are "stumpy" compared to the more "graceful" types of kites that were originally made. I have my reasons for this, and it doesn't stop the MBK 2-Skewer Dopero going directly overhead on 120 meters (400 feet) of line.

The very best shop-bought dopero kites are wonderful hi-tech pieces of gear. Hence they are expensive, with dollar prices in three digits!

Another Type of Kite

I hope you enjoyed that quick tour of the types of kites you are likely to see in the West, floating in the wind on the end of a single string.

Although it doesn't belong in my grouping of eight, I might just throw in a mention of another popular type right here.

The single-string parafoil is a popular concept that has been around for a few decades. The flowform is a closely related type. 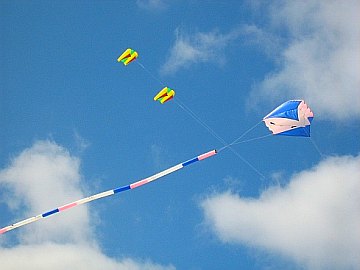 Flowform and twin sleds at a festival

These types of kites are everywhere, and you are certain to see a variety of them if you ever attend a kite festival. Like the multi-line parafoils that pull surfers across the water at beaches, the single-liner has an upper and lower surface, divided into a number of cells that are open at the front. Flowforms also let air out the back. Air pressure keeps the kite's shape pumped up as it flies. Just see the photo, which shows a flowform in the foreground and a couple of ram-air sleds behind it.

But here's the point—you are not going to slap one of these together in an hour or two on your kitchen table. You need a proven pattern and a huge number of stitches are required!

When this page was originally written, a fair amount of background info was collated on these specific kite types. Along the way, many other different kinds of kites altogether were discovered.

Finally, might you be interested in some fascinating in-depth kite history? At this site, click on KITE HISTORY on the right-hand side to browse timelines of kite development and peek into the activities of some early kite pioneers. The webmaster is a historian by profession, and he has done a ton of research on various types of kites and the individuals behind them.