The diamond kite is probably the most recognized type of kite in the Western world today. For centuries, it has remained popular due to its stable and reliable flying characteristics. 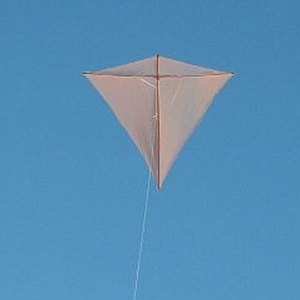 Some people refer to diamonds as "two-stick kites." The two sticks are the vertical spar running from nose to tail and the horizontal or "cross" spar going side to side.

Although not often seen now, the diamond kite design can be flown with a bowed cross spar. If positioned close enough to the nose, this eliminates the need for a tail. For an example of this, see my pale-orange Dowel Diamond in the photo.

The bow can be achieved by tensioning the spar with string, causing it flex. Alternatively, the cross spar can be in two pieces with these then joined to the vertical spar at an angle. This is called dihedral.

Back in Victorian times, the arch-top kite was popular. This design looked and flew very much like a diamond, except that the upper two edges were replaced with a single curved edge. It was like an arch and hence the name.

I certainly made a few classic flat diamond kites as a kid, like many people! Being rather heavy, none of them flew as well as the ones I made for this site.

Diamonds are simple to make, which used to make them a popular DIY choice for children or beginners. Most people these days prefer to buy though, since simple kites are quite inexpensive.

There's not a whole lot of variation in the basic makeup of diamond-shaped kites, but here's what I can tell you: 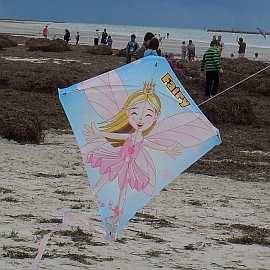 By the way, I'm not covering two-line diamond stunt kites here! This page is strictly about the single-line variety.

Size. Some kite flyers just love to show off with huge kites, and I've read about a few rather large diamonds too. Anything over a couple of meters tall (7 feet) is pretty big! On the other hand, a diamond kite is a popular choice for makers of miniature kites. These can be as small as the palm of your hand (or even smaller) and can be flown on ordinary sewing thread.

Shape. The picture at the top of this page shows an almost-square kite. My MBK design is more traditional, with the cross spar at exactly 1/4 of a spar length from the top of the vertical spar. As far as I am aware, the cross and vertical spars are exactly the same length in most diamonds.

Construction. For flimsy materials such as paper, many diamond kites are constructed with a line around the tips of the kite spars. This forms a diamond outline to which the sail material can be folded over and attached. My MBK kites are just fine without it, since the edges are reinforced with tape to provide resistance to stretching and tearing. It's simpler, too, and simpler is nearly always better!

Tails. These are only limited by your imagination really, but the most common types are a single ribbon, multiple ribbons or a line with cloth or paper bows tied into it at regular intervals. For my bamboo-skewer diamonds, I have tied loops of light plastic together, forming a chain. This works well! Decorative tassels or tails can be attached to the ends of the cross spar as well.

Decoration. Strips of different colored material can be joined together before the outline is cut. The appliqué technique involves sticking light but colorful cutout patterns onto the sail material. Printed sail material can be used. Hand painting or airbrushing can be applied after the kite is constructed. There's a bunch of different ways to decorate a kite! The bigger the kite, the less difference the extra weight of decoration makes to its light-wind performance. Shop bought diamonds are available in a huge variety of designs.

Bowed. Just about any flat kite will fly in a more stable way with some bow built into it. The diamond kite is no exception. With the cross spar bent back, away from the flying line, the kite will require less tail to fly successfully. In some cases, with enough bow, no tail is necessary at all. A lightly constructed flat diamond will sometimes bow a little anyway, in strong wind, thus giving itself a little more stability when it's most needed!

Sail. The earliest kites used paper, but ripstop nylon would be the most common choice these days. To save money, plastic sheet from various kinds of bags can be used on small to medium-sized kites as well. Sheets of Mylar is another option. My freezer-bag kites can be a bit hard to see, but magic happens near sunset, when the sun's rays glitter and glisten off the clear plastic! 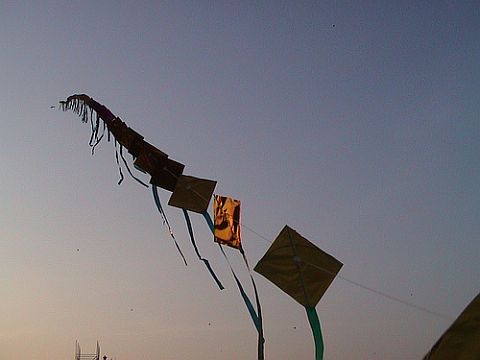 Here's an interesting shot of a train of small diamonds. Just one of the kites has turned enough to catch the sun and display its decoration.

Over the centuries since diamond kites were first popular in Europe, they have been used for many practical purposes.

There were applications such as aerial photography, meteorological observations, and the transmission of long-range radio signals. In this regard, their history has a distinct similarity to the history of box kites. However, box kites came along much later, since the late 1800s, and did all these things better!

But what are diamond kites used for in the new millennium? Just for having fun, it seems!

Apart from the large kites flown by a handful of hobbyists, perhaps, the great majority of diamonds these days are relatively small colorful kites that are mainly marketed to children. That doesn't stop a few older kite nuts like yours truly flying them as well!

There is no end to the variety of decoration on the mass-produced diamond kites. Actually, not all are mass produced.

A small percentage of the market is still supplied by dedicated and skillful kite-makers who offer true flying works of art. These custom kites cost a bit more, of course.

Due to the simplicity of the two-stick kite, many people still make them from scratch at least once in their lives. One of these kites can be made quite sloppily and yet still be expected to fly, with some experimentation with the bridle attachment point. That's the beauty of a simple diamond kite.

In terms of the structural design of diamond kites, there's not much to say. It just hasn't changed much for centuries! But very broadly speaking, these kites have seen three phases over time:

Diamond-kite stories of my real-life flying experiences are worth checking out!

On that first point, there is apparently an illustration in an old document that proves this. The book dates to 1618, and shows children flying diamond-shaped kites in the town of Middelburg, Holland (now The Netherlands). It's fairly safe to assume that such kites were flown in various parts of Europe right into the 1700s.

A lot could be written about the scientists in the 1700s and 1800s who used kites for various purposes. Benjamin Franklin's famous experiments with kites and electricity were proposed in the mid 1700s. We know he suggested using a diamond kite from the text of a letter he wrote in October 1752. In it, he described how to make a kite from a "large thin silk handkerchief" and "a small cross of two light strips of cedar." Whether the experiment was actually conducted (no pun intended) is debatable!

Later, William Eddy, also from the United States, made important contributions to the use of kites for scientific purposes. Eddy experimented with tailless diamond-kite designs, flown in trains. That is, they were all linked together on one line. These kite trains (or stacks as they are sometimes known today) were used to hoist meteorological instruments to high altitude. By 1892, all his kites featured the bowed cross-spar that enabled them to fly without tails. The "Eddy diamond" did a lot to make the diamond shape kite very popular and recognizable in the Western world at that time.

However, the box kite and other related kite designs proved better for lifting work. Hence, after Hargrave from Australia invented his box kite in the late 1800s, the diamond kite quickly faded away from the scientific scene.

In the third point above, I said "back to recreational use." But really, diamond kites were probably always being flown for fun, regardless of what other uses people found for them. The popularity of this type of kite has not always remained steady from decade to decade. However, to this day it's always been possible to find someone, somewhere, flying a diamond kite!

In the video up there is our MBK Dowel Diamond design, doing its thing in light winds.