And a Few Interesting Variations

Box kites come in so many different types these days! You don't have to see many of the ads to realize that. In fact, the term is used rather loosely now. It almost means the same thing as "cellular kite." 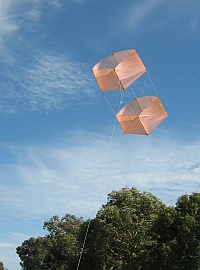 The creativity around the globe in designing kites is amazing. Some are designed to fly stable, others will tumble if you release the line tension for a while.

Flying boxes with small wings are more stable and have even more lifting power per unit area than the traditional box.

Some look nothing like the traditional square designs. A cellular design called "snowflake" is a good example of that.

Cellular kites are made up of many hollow cells, stacked next to each other. In these designs, the cells don't necessarily have flat sides.

I've seen examples of hexagonal kites that gently rotate as they sit in the same spot in the air. Others have parts that slowly rotate in the wind.

There must be dozens of unique designs around now, and who knows, that might turn into hundreds or thousands in years to come. 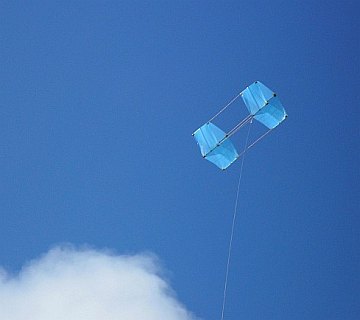 One of our MBK designs is quite a light one, as far as box kites go. A breeze in the gentle range is sufficient to see the MBK Dowel Box climb away.

The traditional square box is not difficult to make but does take more time than a similarly sized diamond or sled.

Are you keen for an even more complicated kite? Why not try a four-celled tetrahedral kite made from bamboo skewers and plastic! Or even stack these together to make a big 16-cell or a massive 64-cell kite!

There are still many people who like to build from scratch, rather than pick up a retail box from the local kite shop. Or, these days, it's more likely to arrive on your doorstep from an online shop.

Usually a scratch build is something relatively simple, like the traditional square box which flies on one edge.

However, there are also some amazingly keen enthusiasts out there who tackle high-quality reproductions of famous historical kites. Some examples would be the Cody war kite, the Hargrave box, and Alexander Bell's tetrahedral designs. See further down this page!

I've already mentioned the MBK Dowel Box for light to moderate winds. When the breeze blows harder, we pull out the fresh wind Dowel Box which stands a much better chance of surviving the strain! There it is in the photo, in flight on a sunny but very gusty day.

The list below shows where the modern box design has come from. Despite that, plenty of people still fly these designs for fun! In some cases, these kinds are still being used for practical purposes too, like hoisting cameras or ham-radio aerials: 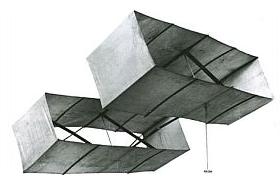 The history of the box-style kite is an interesting one! Its lifting abilities and stability led to many practical uses. The generally accepted inventor of the box kite was an Australian named Lawrence Hargrave.

The main features of the final Hargrave design were the two long straight spars running the full length of the kite, the diagonal braces which made the whole structure rigid, and the flat cloth sails giving it the unmistakable "box" appearance. 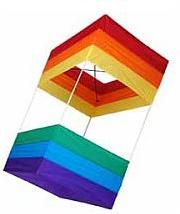 The so-called traditional box came about after somebody simplified the Hargrave design. Also, it's square rather than rectangular.

The traditional design only needs the four main spars and four diagonals, plus the sail material. An interesting historical example is the so-called Gibson Girl box kite, which was used by downed aircrews during the Second World War.

In flight, the Hargrave looks a bit like a biplane, but the traditional square design flies on one corner. This is because the bridle attaches to just one of the spars. 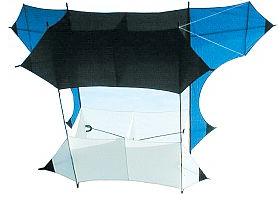 Over there is an example of modern Cody kites. The Cody's eye-catching design with two square inner cells and bat-like wings is well known among many kiting enthusiasts all over the world.

Both modern and historical Codys are like two box kites side by side, with some extra vanes and winglets added for more lifting power.

The idea behind this design was to make something that performed just like a Hargrave, but with even more stability and control. I've put together a little research on the original Cody war kite, in case you're interested. 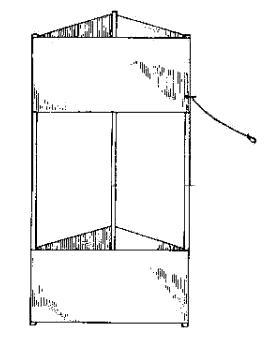 Although the first box kites were rectangular, similar kites with one less or many more main spars will still fly.

In the case of one less, that makes a triangular box kite. The early ones required more complex cross-spar bracing than the traditional square box.

A simple triangular design looks and flies very similarly to the traditional square box, with the bridle attached to one of the main spars. They take a bit more breeze to fly though, for the same size kite.

The triangular box is often modified with the addition of wings, to make it more efficient.

Ham-radio enthusiasts still use the French military kite to hoist long aerials into the air. 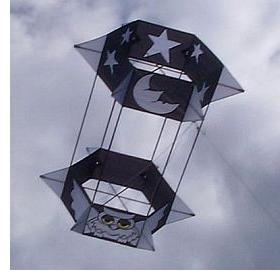 OK, what about adding more spars... A few kite designs these days are based on the hexagonal concept.

Yes, that means six main spars! The whole thing starts to look less like a box and more like a barrel. The picture shows a design that is pretty close to a traditional hexagonal kite. It's by Helen Howes, a now semi-retired pro kite maker in the UK.

In theory, you can have as many spars as you like. In fact, it is possible to go all the way and make a circular kite that looks like two wide pieces of tubing floating in the sky.

Creative people have done huge amounts of development on the box concept. It seems half the fun with such kites these days is inventing a new one! Some people:

Here are a few examples, one for each category in the list above:

An interesting variation on the basic 4-spar design is the Explorer Box. Despite the classic four-spar construction, this kite has triangular panels that give it a really unique look. It's designed so the bridle can be easily attached to any spar. This gives four different looks to choose from, when flown. Like many modern kites, the spars are fiberglass and the sails are ripstop nylon.

A typical example of merging the basic box with other elements is the B-Box beginners' kite. This one is based on a triangular box, actually. The addition of simple wings and two tails make it an easy stable flyer. It handles gusty winds well. It's easy to set up and is also made from ripstop nylon with fiberglass spars.

How's this for a cellular kite which Lawrence Hargrave would just shake his head at, I think. The Lotus Box is a spectacular-looking kite with many triangular cells arranged in a circle, with extra sails on the outer rim. Look closely, and you can spot the basic triangular box kite in there! So it really is a box design. With so many spars, the manufacturer has made them out of graphite to keep the weight down.

Here's a good example of special behavior. The cleverly designed HQ Roto Kite rotates around its axis while maintaining its position in the sky. Eye-catching hey? According to the makers, it's "a reliable flyer with light pull."

Not many box kites these days are used for scientific or other practical purposes, at least when compared to how many of them are being flown for fun! The latest designs get shown off at kite festivals and then sold off through kite shops both real and "virtual" on the Internet.

Since the whole idea for most of these kites is to look at them, it's not surprising that lots of bright colors are used in the designs.