The Box Kite, Not the Radio!

I won't even mention the original Gibson Girl, this being a kite site. Instead, let's just perpetuate the kiting myth of the Gibson Girl box kite.

You see, it was actually the hand-cranked radio transmitter in a sea-rescue kit that was given that name.

During the Second World War, a downed U.S. Navy crew member would loft the kite to get the aerial up to a working length. If a friendly craft was within range, and picked up the Morse SOS signal, the guys in the sea stood a chance of being rescued.

However, the Gibson Girl was made of relatively heavy and strong materials and thus was a moderate-to-strong-wind kite.

In light winds, the aerial could be lifted with a balloon instead. 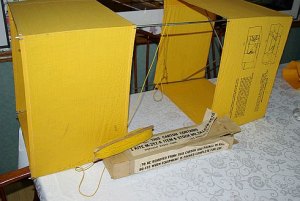 At the Adelaide International Kite festival one year, I even got to see a GG box up close. An interstate visitor had brought it along to fly! The flying line appeared to be original and fairly well used, so I warned the guy not to fly the kite too high. There would be no point in losing such a treasure in the sea.

A short while after starting this page and after seeing a few photos of the war-time kite, it struck me how the dimensions were so similar to my own MBK Dowel Box.

The historic Gibson kite is just above door-knob height when standing on end. That's about as long as the 1.2 m (4 ft.) long MBK Dowel Box. The gap between the upper and lower cells is slightly less than on my design. Even the original metallic spars look quite thin and spindly, as do the 5 mm (3/16 in.) hardwood dowels on the Dowel Box kite.

Specs and Other Details

The American version of this historic kite was the latest and followed the original German and English versions. The Germans actually used a winged box based on the French Military kite! As usual, the details are spread far and wide over the Web in all sorts of sources. Also as usual, I have thrown it all into a melting pot and boiled it down to just one info-packed list, for your convenience:

Box-kite stories of my real-life flying experiences are worth checking out!

They're illustrated with photos and videos, of course.

While looking all this up, I came across some first-hand accounts of guys who actually owe their life to this kite. Fascinating.

And yes, the image near the top of this page is of an original Gibson Girl kite. It's still in almost as-new condition after having been packed away for more than half a century.