The Earliest Years of MBK

All the earliest kite-flying stories recorded for the MBK website may be found here—starting from March in 2007. 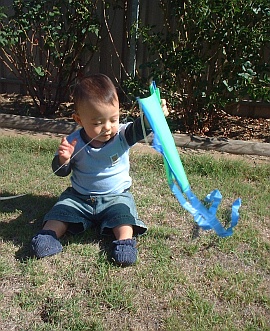 We used to get out at least once a week and document everything that happened. For example, which kites we took, how high they flew, how long they flew, and the weather conditions.

Our catalog of kite designs has grown hugely since then. After you scroll down a bit, you'll see how you can try some for yourself—or your kid(s)—one day.

At this time, our son Aren was a very cute toddler. He still got involved with the kite flying though, and we also took a few photos, which you can find in the links below. It was often convenient just to hand Aren the winder while he was sitting right there in the pram :-)

There's little Aren in the photo. The small green Baby Sled features heavily in our initial reports! It's still out there in the shed but rarely gets a fly these days.

Here's a sample flight report from way back in October 2007, to give you some idea of what lies behind all those links further down.

The weather was getting wild outside, although there was no rain or lightning—just a stiff gusty breeze, and it was a bit chilly. Just for fun (on the spur of the moment really), I headed outside into the backyard with the MBK Barn Door kite. For extra stability I had attached a triple tail. The kite had three looped tails, each just over 2 meters (6 feet) long.

Within half a minute, the bridle, tail, and flying line had hopelessly tangled into each other. This was because of the unpredictable swirls of air coming around the walls of the house. About 15 minutes later, after going inside the verandah and patiently untangling everything, I came outside for some more punishment :-)

This time I managed to get the little barn-door kite in the air and quickly let some line out. The kite managed the weather surprisingly well, considering some of the gusts must have been over 30 kph! In fact, although I didn't know it at the time, there was a current severe-weather alert for Adelaide.

Out of all the rather short flights, the best was when I managed to get most of the cotton line out before the kite hit anything. For a very satisfying few seconds, it flew at about twice the height of our house roof during a slight lull in the gale. At other times, it raced left and right while struggling to right itself. All in all, there were many eventful moments:

Through all this, that little bamboo stick holding the bow in the cross spar stayed put. It didn't budge, despite all the trauma! Amazing.

We used some blogging software for a while, with which we covered the period from October 2007 right through to March 2009. This material is presented in reverse chronological order. The latest reports are first, in other words.

After this, our occasional kite-flying stories appeared in the site-blog page for many more years, until that was also discontinued in 2021. 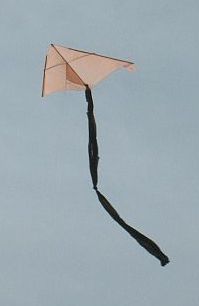 It all started in March 2007, when we came home from the local kite festival. We had bought our toddler son a Baby Sled so he could see a flying kite on a more regular basis.

After that, we moved on to making and flying the 1-Skewer series of small flat kites from bamboo BBQ skewers and freezer-bag plastic.

For just a few cents each, these simple bamboo-and-plastic kites provided an amazing amount of flying adventure. Some were failures, but on the whole they did really well in moderate breezes. The air was rarely smooth but that just added to the fun!

Also from this era, here are a couple of reports on some duration and altitude record-keeping:

Here are all the kite flying stories, with the latest posts listed first: