Comments: We thought we'd try a new flying ground today, after checking out all the nearby reserves in the street directory. After a short drive away, we parked the car and headed over to the reserve next to Reynella Primary School. Even before we got through the tree line surrounding the park, it was clear that we had found a very good spot for kite flying! 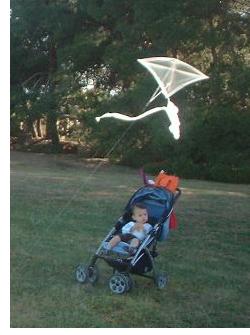 In no time, I had the diamond out but had trouble hooking in the paper clip, thanks to advancing age and no reading glasses. May did it for me, then started the photoshoot while I test flew the kite close to the ground.

After a while, I took the camera and by some fluke took a fascinating shot of the brilliantly backlit kite hovering over our little son like an angelic being.

Once we had plenty of shots taken, I headed out toward the center of the grounds, letting the diamond take out line at a great pace. First 50 meters (165 feet) then 100 meters (330 feet) and the kite was flying beautifully. With the fresh breeze up aloft, the kite showed signs of wanting a more forward attachment point, but still flew around the 45 to 50-degree mark.

With the late-afternoon sunlight glinting off its fluttering shoulders and brightly illuminating the snaking tail, it was quite a sight. It was quite a satisfying sight actually, since I have been painstakingly documenting and photographing this kite's construction for a few days!

By now, May had the Windjam delta in the air too, and she flew it for a while at low altitude. She told me later she didn't want to take forever to wind it back in!

With the extra room available in the reserve, I let out another 50 meters (160 feet) of monofilament. So finally, the little diamond was just a dot in the sky with the ripples in its bright shimmering tail making it a bit easier to spot. It managed to reach about 45 degrees, with a line angle from my hand of about 25 degrees. It might do better with the bridle adjusted slightly, but 150 meters (500 feet) is a lot of line for such a small kite. I might eventually try it on even finer line. 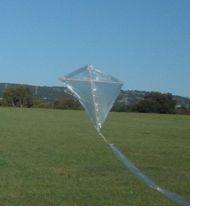 With this kite, I have dropped the paper-clip idea for attaching tails, and have gone with using a simple Larks Head knot. This is simpler, and most importantly, lighter. All the MBK kites from here on will do it this way.

With help from May, we reeled in the diamond and packed it away before hooking up the MBK 1-Skewer Delta. Maybe I can get the delta much higher! It is certainly capable of a much higher line angle than the diamond. As before, letting out line was very easy in the good breeze. However, the temperamental delta never made it to a really high angle since it was right on the edge of its wind window. Yep, there was too much wind! It looped this way, it looped that way, climbed a bit, scudded across the sky sideways for a while, corrected, climbed some more, looped some more, and on and on it went. All in all, it never got any higher than the diamond, and I stopped letting line out at around 120 meters (400 feet) or so.

Winding it in was interesting. It got so close to the trees at one point. One time I was sure it hit a house roof! I gave a pull, and it magically reappeared and shot back up to 20 or 30 meters (100 feet). A moment later, after some more looping misbehavior, it disappeared from view once more. "That's it" I thought, but no, it just flew back into view again! I should mention here that the reserve has an uneven surface, and the far side had a considerable downward slope. Eventually, the delta hit the ground and stayed there while I walked toward it and reeled in.

I'm really pleased with that diamond! It's so stable in a fairly strong gusty wind, and yet I expect this to be my best light-breeze kite also, for quite a while.

Comments: It was late in the day, with a reasonable bit of breeze about. There was not much cloud, and it was a bit cool. The three of us went out with the Windjam kite and the MBK 1-Skewer Diamond. Approaching the reserve, we found kids kicking a football and others clambering over the play equipment. OK, it's on to the usual Plan B. That involved another right turn and going back up the hill to the vacant block.

Throwing a bit of dirt in the air confirmed that we had a northerly, so we parked the pram near the edge of the grass and attached the diamond kite. There was not quite enough wind to launch it in the wind shadow of the fences and tree, so I walked maybe 15 meters (50 feet) or so, laying out line with May holding the reel. During a brisk walk back, I felt the tension in the line as I pulled the kite up to smoother air.

Turning around, I let the diamond pull line off the reel slowly with each long gust. I stopped the reel from spinning once in a while to let the kite gain height. There was only just enough breeze to do this, but eventually, there it was with bright-blue tail attached, hovering at around 35 degrees of line angle. It's capable of a better angle, but needs a few more knots of wind! Just over 100 meters (330 feet) of line was out, as indicated by the second bit of dark tape attached to the line. There's one every 50 meters (160 feet). It took a bit of patience to put them on, I can tell you.

This kite is just like the one I am constructing for this month's newsletter. Our 1 1/2-year-old Aren came close to wrecking this kite a few weeks ago, hence it flies now with a patched-up hole on one side and a similar area of sticky tape on the opposite side to balance it up! No doubt, the extra weight has added an extra knot or two of wind speed to the bottom of its wind-speed range. Never mind, we'll be flying a new one this week.

With sunset approaching, the wind died right off. Just the occasional gentle gust would come through, moving the highest leaves in the surrounding trees. The diamond was down, with May reeling it in across the grass. I couldn't resist trying to launch the Windjam kite however! I towed it up to 10 meters (33 feet) or so a couple of times, but the air was barely moving. It just wasn't enough even for this rather efficient kite. It was time to call it a day.

Comments: I've been itching to put the Windjam kite through its paces recently, so Aren and I went down to the reserve armed with a brand new 300-meter (1000-foot) reel of 8 kg monofilament line. With the standard MBK paper clip attached of course :-) With cross spar removed, the kite rolls up and takes hardly any space at all. Weather was a touch windy, but nothing a moderate-wind kite like this couldn't handle. Plus I was curious as to how this kite would react to thermals.

The first launch resulted in a short flight, when a tall tree beside us shot the kite down with a swirl of turbulence. On the next launch however, the kite soon had treetop height and the air was smoother and stronger from there. It wasn't too smooth though! There was heaps of thermal activity around. This was evident when the kite started pulling strongly and parked itself at a 70 or 80-degree line angle for a while! I continued to let out line, with an eye on the trees at the far side of the reserve.

The Windjam kite took some strong gusts, and it became clear that despite having that "shop bought" look, it had a small bias to the right. During one particularly strong gust it actually performed a very deep loop to the right, losing more than half its height before recovering. After that, the wind died a little, although thermals continued to push the kite to very high line-angles from time to time. The line tension was too great to allow Aren to fly the kite, but I let him hold the reel a few times while I took the line tension in my hand.

With maybe 150 meters (500 feet) of line out and no sign of the kite coming down any time soon, I decided it would be a good idea to start reeling in. Taking note of the time, I started the laborious process, taking care to not let too much line tension end up on the reel—or so I thought! With the kite on less than 20 meters (60 feet) or so, I heard a small snap. Oh-oh. 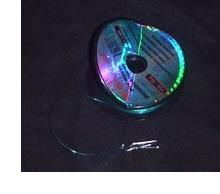 Sure enough, after another minute or so, the reel failed pretty badly, with half of one side folding over. See the photo!

I don't know how the line stayed in place, but fortunately it did, while I wound on the last few meters. Lesson learnt. This stuff needs to go on a decent reel right from the very first flight! Another reason was that it took me a full 20 minutes to bring the kite in.

Without really trying, this kite probably broke my height record by a large margin and also nearly broke the duration record.

While pushing the pram home, thoughts of mechanical or maybe electric winches and oversize reels played on my mind.