Comments: The three of us had been out and about but detoured to the reserve on our way home. The plan was to put the Windjam kite up first. Then, we would get some good pics of our toddler son, Aren, flying the recently made MBK Kids Diamond. 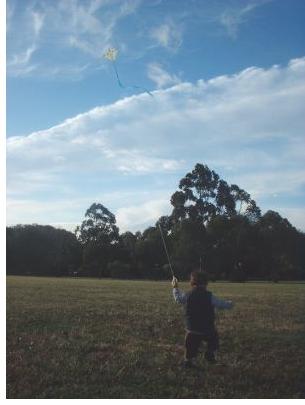 On stepping out of the car it was clear we that this was not going to be a long session, due to the cold wind. Walking south across the field, we stopped briefly to setup the Windjam delta kite then continued on with the kite in the air. In the brisk breeze, it went straight up almost as fast as I could let out line. Looking around for an anchor point, I decided on using the corner post of the cricket-practice nets. Feeding the reel through the wire netting, it was easy to jam it in a position that would hold the kite. The colorful delta was flying high with over 30 meters (100 feet) of line let out.

Now let's get onto the main business! Out came the MBK Kids Diamond, already attached to our 15-meter (50-foot) cotton test line. My wife, May, got busy checking out the camera angles. It was a bit tricky, with the kite flying close to the direction of the late-afternoon sun.

The little diamond kite looped and dived a lot. In the fresh breeze, it really needed more tail for added stability. Never-the-less, we soon had the plastic reel in Aren's hand. He started trotting off downwind, still flying the kite with his left hand. It was very cute to watch; there he is in the photo, in mid-stride!

To make the kite big enough to see in the photos, we needed to fly it on a short string. Of course, that meant a lot of relaunches as it struggled in the fresh conditions and kept contacting the ground.

To add a little more challenge, Aren decided that it would be fun to drop the reel and run toward the kite each time it landed! However, May persevered, and we ended up with plenty of pics.

Eventually, Aren found yet another game to play. It was called "throw the reel onto the ground and watch Daddy chase after the kite." Again and again and again—end of photo shoot.

With the breeze freezing our collective butts off, we quickly reeled in both kites and drove home. No records were broken, but it was fun watching Aren fly the Kids Diamond kite!

Comments: It was a public holiday, so after a few hours work on this website in the morning, we headed off to our latest favorite kite flying park. Hearing just a bit of a rustle in the bushes around the house was enough, since most of our kites are good in light breezes.

Conveniently, the breeze was from the west so we didn't have to walk far past the tree line to find a suitable spot to launch the kites. The MBK Sled came out first, and to begin with things looked promising. A gust soon had it in the air and climbing. It was too bad I hadn't got around to fixing its hang-to-the-right tendencies though. It was soon on the ground again. Then the wind went really light and variable, sometimes with the direction shifting by 180 degrees! On top of that, there were so many thistles and burrs in the grass that the tails kept getting caught. And the flying line would hang up on a thistle from time to time too. It wasn't much fun.

It was time to forget the sled for a while and hook up the diamond. Back at home, I had attached it to the double-width blue tail for extra visibility. For these very light conditions, the tail was a bit heavy, so again there were multiple launches followed by sagging to earth again.

At last a stronger breath of air came through that actually lasted for a while. In no time, the MBK 1-Skewer Diamond was sitting pretty at 10 meters (33 feet) or so, while I fiddled around trying to get a burr out of the line. The burr was knotted in tight and refused to come out. Meanwhile, the kite ran out of puff and had ended up on the ground. I should have just let the burr go for a ride to 300 feet and worried about removing it later! Never mind.

I briefly tried to remove the blue tail, hoping to change to a lighter one. But the cotton had separated into strands and the Larks Head knot was too hard to loosen without my reading glasses. Oh well, there's still one more kite in the bag. Those tails probably need a heavier kind of cotton line so the Larks Head knots aren't so fiddly. It's just a very short length of cotton, so there wouldn't be much extra weight at all. We'll get to it later.

We took some photos of Aren flying the Windjam kite at this point. The top pic shows Aren hanging onto the reel, quite unaware of the kite on the other end. The middle pic shows an excited little man, thinking "Hey Dad, I'm flying that thing!" He can't talk just yet. Finally, in the bottom pic he seems to be thinking "This kite flying business is just so cool..."

After a while, I got a bit bored with a mere 300 feet, so out went some more line. We don't have measurement tags on this line yet, so we don't know for sure how high the kite was. So there was no setting a height record on this occasion. However, with roughly half the line out, I think the Windjam delta was pushing close to the ... erm ... legal limit of 400 feet above ground. Yes, it's got to that. To set altitude records from now on is going to require some arrangements with CASA, the air safety authority. On that point, we did notice three aircraft which flew overhead or close by. There were two light aircraft and one jet, all under 3000 feet by my estimation!

After 25 minutes elapsed time since we started the stopwatch, it was time to start reeling in. The idea was, we would take ages to get the kite down, and the duration record would be broken by the time we did this. With Aren strapped into the pram, I pulled in the 8 kg monofilament line hand-over-hand while May wound it onto the reel. Doing things like this has two advantages. It's fairly fast, and the line gets wound onto the reel with low tension. Remember the last time I reeled the Windjam delta in by myself, and it crushed the plastic reel?

It turned out that we were winding in too fast. In order to set our duration record, we needed to pause for a while. May had some fun flying the kite at around 200 feet or so. After that, we just wound the line around the pram handle a few times, with the reel sitting in the plastic tray. It held fine. This reminded me of a mathematical formula I once came across. In a nutshell, the frictional resistance of a line or rope wound around a cylinder increases extremely rapidly with the number of winds. So just a few loops will hold something, like a kite, quite firmly. Anyway, enough of the applied mathematics ;-)

We eventually starting winding in again, this time with May pulling down the kite and me winding the line onto the reel. Aren "helped" May with the pull-down from time to time :-) As the kite got down to about twice treetop height, we began to hear the fluttering of the tails. Down below treetop height, there was very little air movement so it bobbed and glided around until it gently settled on the grass about 15 meters (50 feet) away. That was 50 minutes air time! A new duration record.