An Oldie But a Goodie

The picture of a Cody kite is one of Cody's earliest experimental designs. Cody made quite a few, but I won't list all the variations and details here. 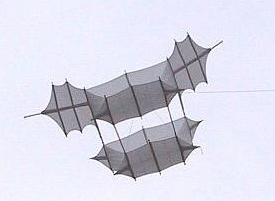 Some of the original kites are still in existence.

I know of one Cody kite in particular, a smaller model with side sails that lean outward at the top rather than being absolutely parallel like a classic box. Here's a few notes on the materials:

It's easy to see that the origins of this kite's basic construction lay in the Hargrave double-box kite. Cody was after even more lifting power and stability though. Also very influential was the old American Blue Hill meteorological kite design of the time.

So what did Cody actually do with most of his kites? Did he fly them in the park to amuse his grandchildren? Well, no. He was mainly interested in man-lifting and multiple-kite systems. 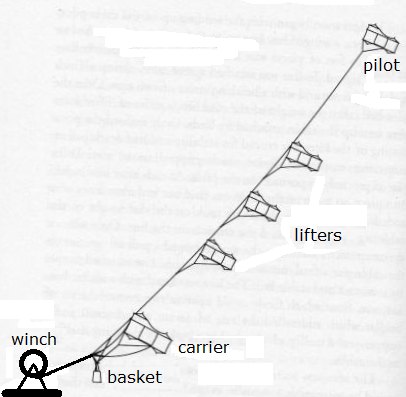 Cody was the inventor of a clever system of sending up a whole train of his kites. That's also called kite stacking these days. At least a couple of copies of Cody's multiple-kite system have been constructed for doing rather impressive displays at kite festivals!

Here's a quick description of one of these man-lifting systems:

I don't know why the word "passenger" is often used, since this person is actually in charge of controlling their ascent and descent via a system of lines and brakes. At least that was the case in the original system.

Cody's achievements were not the end of his man-lifting kite system. Since then, enthusiastic people have recreated the system and demonstrated it.

For example, Nick Morse built a replica Cody lifter system for a BBC documentary in 1977. It was used successfully for man-lifting at the first two Scheveningen kite festivals in 1977 and 1978.

Another system was later built by Berry Kramers and others. A Dutch man-lifting team has flown it many times, in different locations around the world.

Although no human beings were lifted, Dan Flintjer once demonstrated a series of five 10-foot-span Cody kites. The passenger? It was "Animal" from the Muppets, who rose nearly 500 feet off the ground in a little basket! The kite train still had to be anchored to a truck, due to the combined pull of those large kites.

History of the Cody Kite

Now for some background on Cody himself, who was born in 1867 and died in 1913. That's him in the black and white photo, on the horse. His full name was Samuel Franklin Cody and to this day he is highly regarded in England for being a real pioneer of aviation in that country.

In fact, Samuel Cody is now referred to by many as the "Father of British Aviation."

In September 1993, a small band of enthusiasts formed the Cody Museum Trust to keep alive the memory of Cody the aviation pioneer. The trust became the Cody Society at a later date. But we're getting off topic here; let's get back to the kites! 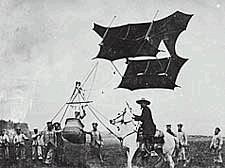 Cody himself, on horseback

Somewhere around 1898, when Cody was taking his Wild West show around England, he became interested in building kites. He competed with his stepson Leon to make and fly the largest kites possible. They also attempted to fly these kites as high as possible. Finally, in 1901, they patented the winged box-kite design we now know as the Cody kite. Its design drew on the Hargrave double-box kite and also the American Blue Hill meteorological kite.

In December of 1901, Cody offered this design to the War Office which at that time was involved in the Second Boer War. To prove its suitability for aerial spotting, he flew it at various locations around London, at heights up to 600 meters (2,000 feet).

A number of other accomplishments followed. He mounted a large exhibition of his kites at Alexandra Place in 1903. Later on, he even managed to cross the English Channel in a canoe, towed by one of his kites. The French kite surfers on the other side were surprised and shocked to see him coming over the horizon. OK, I added that last bit ... history can get a bit dull after a while, so I'm just trying to keep you awake :-)

The British Navy sat up and took notice after this and even paid him to look into using kites as observation platforms. A few demonstrations followed where he hoisted an observer up into the air under a large kite. In 1908, Cody himself flew off the deck of the battleship HMS Revenge, in another man-lifting demonstration.

Make Your Own Cody

If you're interested in building a Cody kite for yourself, it's possible to work direct from copies of the original plans. For example, the Drachen Foundation in Germany can supply copies of the original blueprints of Cody's Mark III kite. This kite was designed and constructed for the Ministry of War, England.

If you're not ambitious enough to tackle a real Cody, try contacting Nico van den Berg for a simpler modern version of the Cody box kite. Or just purchase a simple retail Cody and scale it up and substitute your own materials and construction ideas.

Why haven't I quoted contact details for the above sources? These things tend to go out of date over time, so I'll let you do the detective work! That's easy to do on the Web these days anyway.

Finally, if you would like to whip up a far simpler box kite for your own enjoyment, see below...