From Conyne Kite to Prism Triad

Triangular box kites are not quite as well known as the traditional square box but they are nearly as old. Like the square box kite, the triangular design has been used for many practical purposes as well as for pure fun flying. 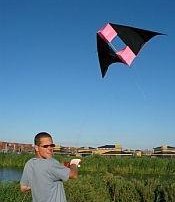 The simplest type has just two cells. That is, two sets of sail cloth are wrapped around a set of long spars with a gap in the middle. It's just like a traditional box kite except there are three long spars forming three sides instead of four.

The triangular type of kite represents the fewest number of sides that a box kite can have. Kites built in this style can actually have any number of sides. For example, hexagonal and octagonal box kites have six and eight sides respectively. These too have been built and flown for many years.

What do you think a box kite with a very large number of sides might look like? That's right—a couple of hoops! A few kites like this have been built and flown.

Conyne kites, like the delta conyne in the photo, have been made in many variations. For example, some have more than one triangular box component side-by-side. Others have more than two cells per box component. I have a closer look at these types of kites further down this page.

The conyne shown in the photo is the most common variety. It's a versatile kite that can be used (as a friend of mine does often) for taking aerial photographs.

Here's a modern kite which is technically a triangular box but doesn't have much else in common with the kites discussed so far.

It's the Prism Triad, a kite with 41x41 cm (16x16 in.) sails. It has just the one cell, not two, so that's just three sail panels arranged in a triangular box. The panels are tensioned and kept in shape with six flexible rods—three around each opening of the cell.

The Triad is a very-light-wind kite, completely unlike most box kites. This is achieved by using the latest materials, including MicroCarbon for the frame. The kite weighs just 43 grams (1.6 ounces)!

For extra appeal, the Triad is designed to be easily flown in trains. You can hitch together as many as you can afford, all in a line stretching up into the sky.

Another feature of this design is its tendency to tumble down through the air when the line tension is reduced.

Just like the traditional box-kite, the triangular type was eventually modified with wings to lift better. This was first done in 1902 by an American called Silas Conyne. This idea also inspired the French Military kite of the early 1900s. These kites had some similarities to the more complex Cody military kites, except they used three instead of four main spars for each cell.

The wings of the French Military design were quite short. A single short spar extended out from the top of the kite on each side, forming the pointed tip of the wing. Eventually, as delta kites began to be developed, someone had the idea of merging the two designs. The resulting delta conyne could fly at higher line-angles and also stay up in lighter winds than the standard box.

If you see someone flying a triangular box today, chances are it will be one of the delta variety! Some even have two sets of cells in the middle, side by side. These kites are known as double conynes. 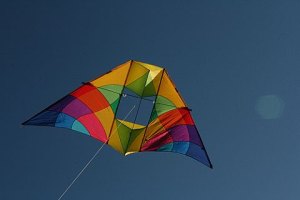 In the 21st century, just about any kind of kite is available from a shop, either on or offline. Various kinds of triangular box kites can be bought. They are made from the usual modern kite materials such as ripstop nylon or Mylar for the sails and fiberglass or carbon fiber for the spars. To keep costs down, these kites are usually small-to-average sized.

However, people who like to build their own often opt for really big sizes! This is particularly true if they are chasing altitude records or hoisting heavy photographic gear.

Large delta conynes are also popular with the kite aerial photography (KAP) crowd. The high lift of the delta plus the stability of the triangular cells make the delta conyne kite a good choice for KAP. People tend to experiment with other configurations too. For example, two box kites can be hitched side by side under a delta wing, forming a double-conyne box kite.

It might look a little simpler than a four-sided kite, but triangular box kites actually need more parts in order to stay rigid. Like square box kites, they can be made permanently rigid or collapsible for easy transportation.

One way to make a triangular kite is to make up two triangular frames from six short pieces of wood, all the same length. After the frames are ready, three long spars are fitted, running through each corner of the triangular frames. Sail cloth is then wrapped around and secured to each end of the complete assembly to form the sail panels. These panels should be about a quarter to a third the length of the entire kite. Finally, a bridle can be attached to each end of one of the long spars. Like the square box, a bridle is not strictly necessary since the flying line can just be attached to a long spar about a quarter of its length in from one end.

Another way to make a triangular box kite is to start by laying out the two strips of sail material on a flat surface. Then, the three long spars are laid down across the sail material at intervals. Just imagine a kite undone and laid out flat. Then, 12 short lengths of spar material are laid down at right angles to the main spars. These shorter spars, about 1/6 the length of the main spars, stiffen the leading and trailing edges of each panel. The ends of the short spars do not quite touch the long spars. Long pieces of tape can then be used to securely fasten the short spars to the sail. The tape also reinforces the sail where it bends around the long spars. When the whole thing is folded up and fastened with tape, it becomes rigid and is ready to fly once a flying line is attached. Velcro could be used instead to make it collapsible.

If you actually make a triangular box kite that is of similar dimensions to a square box kite you already have, it will soon become clear that it requires a bit more wind to fly well. That's partly because of those short spars. The extra weight increases the "wing loading" of the kite. But who cares, really, when you can still fly in a wide range of strong wind conditions! Pull out a two or three-stick flat kite for those light-wind days.

The original simple triangular box with just the two cells is not seen much now. However, its influence is considerable. Triangular box kites are most often seen as

Talking about complex, how's that yellow three-celled design in the photo. It was inspired by the French Military kite but has more wings and more cells!