A Great Old Design Lives On

It's just amazing that Cody kites can still be so popular, given their early origins. Over 100 years old now, the double-box design with bat-like wings and horns is still flying proudly all over the world. 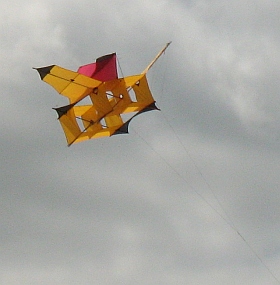 We saw this Cody at a festival

From its man-lifting origins, kite lovers now painstakingly construct and fly many varied examples of this design. Not everyone tries to be authentic in either dimensions, spar material, or sail material, so there is great variety!

Most Codys are flown purely for the fun of it. On the other hand, sometimes the stable high-lift Cody box is used for kite aerial photography (KAP). Another common use for high-lift kites is hauling up "line laundry," like inflatable figures, windsocks, ribbons, and spinners.

Whether big, small, and in plain or fancy color schemes, the design is always recognizable. Of course, the best modern materials are usually used, except if someone is trying to construct a perfect replica of the original.

Modern Cody kites with their graphite spars and nylon sails are even more efficient than the originals!

What I personally find surprising is how such a complex kite could have such a following. Sure, some modern retail versions are quite simple to put together but the more authentic creations are another story!

Some people just like a challenge, while others have deep respect for Cody himself, particularly in England where most of his work was done.

Let's have a look at a real contrast with the original big Cody War kite—a small easily-rigged "contemporary Cody." There's a picture of one down there. But it's still unmistakably a Cody! 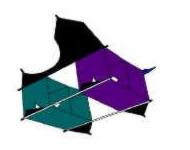 As with the originals, modern Cody-style designs sometimes have a top sail as well, for more stability and a little more lifting power.

Also like the originals, some keen kite-makers make their own versions that are just as fiddly to set up and break down!

Some people like to stack their Codys up in the air by flying several at a time. These are usually all the same design though, unlike the old man-lifting system. Also, as I mentioned earlier, some people use them for KAP or suspending line laundry.

What about prices? I've seen retail Codys anywhere from under US$25 to around US$500! But this might soon be out-of-date info. The point is, there's a large price range for this type of kite in the shops. 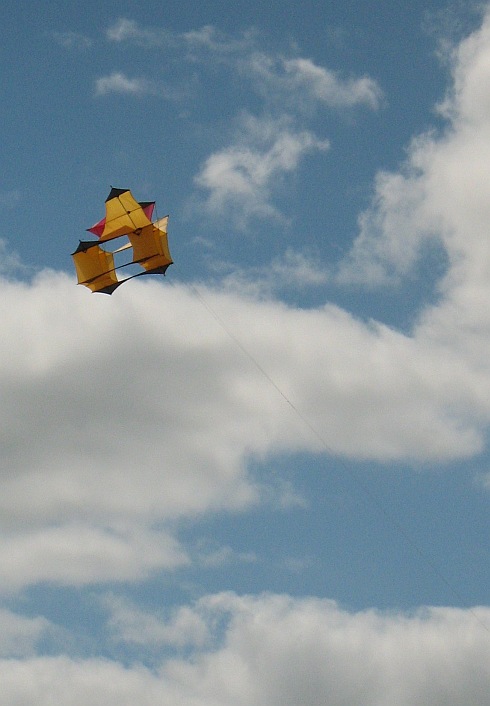 Another view of the big Cody Box we saw

There are as many different-looking Cody boxes as there are keen builders of this design! Just to give you some idea, I've come across a site that features Codys with sails that are

Codys come in all sizes these days. The photo is of a very nice large Cody that we saw at the Adelaide festival some time ago... Yes, it's another view of the same kite featured at the top of this page.

How's this—you can buy a Cody kite plan for US$3. If you carefully follow the instructions, it takes about 3 hours.

You are then the proud owner of a tiny craft that weighs just one gram and has a 25 cm (10 inch) wingspan! So small, it can be flown indoors at walking speed. For this sort of thing, just search on the Internet for "miniature kites."

Now for the other end of the scale...

Dan Flintjer has been designing and building Cody box kites for years. I've seen a photo of his biggest Cody. It's black, and the little toy soldier standing near one corner turns out to be a real person when you look closer! A massive kite, it stands nearly 7 meters (22 feet) high and has a 10 meter (33 foot) wingspan. There's more on Dan further down.

Some people take their kite building seriously. If you are also serious about building and flying the Cody kite then you are likely to come across these names sooner or later. I'm sure there are others too, who have similar kite-building achievements but aren't as visible on the Internet.

Lutz Treczoks was born in 1958 and made kites in Lueneburg, Germany, since 1998. He was a keen flyer before then though. After trying his hand at various kinds of kites, he finally turned to box kites and then the Cody in particular. His "Extend Wing Cody War Kite" was claimed by some to be "absolutely the finest Cody kite on the commercial market." 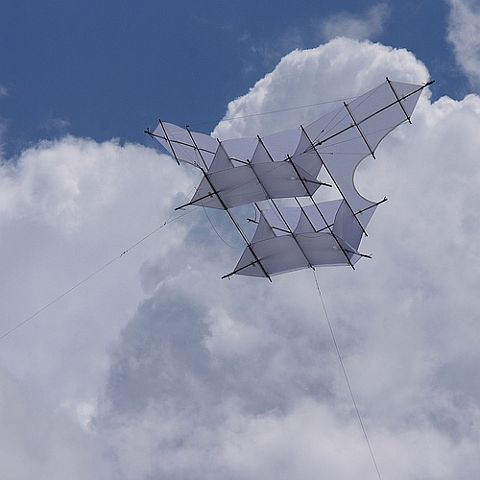 With a reputation for using the finest materials and great workmanship, Lutz's designs developed a big demand. When you're selling that many kites it's a bit hard to keep up. As a result, most of the production of his kites was eventually shifted offshore, to Chinese factories in particular. Now people can own an exceptional Cody for less than half the price of the German originals.

Dan Flintjer has been making kites a lot longer, way back to 1983. He is particularly well known for designing the "Buffalo Cody Kite." His focus has always been on box kites as far as I can tell, with the Buffalo kites being particularly successful, selling in the thousands through retail stores.

Part of this success is due to his "tree repellent" and more recently "power-line repellent" that is coated onto his kites. These are secret formulas that will never be revealed. I take my hat off to his marketing genius. Like they say, there's a ... born every minute ;-)

As with all successful kite-makers, quality craftsmanship can be seen in all his work. While he was making kites himself, his output included over 900 Codys. Wow.

These days Dan Flintjer is the Assistant Director of Education at the Niagara Aerospace Museum in Niagara Falls, New York. He spreads his love of kites and shares his building techniques in numerous schools and colleges in the USA.