A History of Box Kites

From Hargrave to the EO6

Early in the history of box kites, they were used mainly for lifting. Lawrence Hargrave, the inventor of the box kite in 1892, used to link several together and even hoisted a very trusting human under the largest of them! 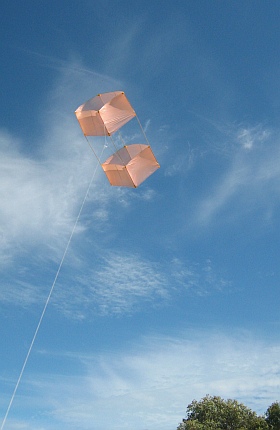 Samuel Cody, from the United States, later extended the rectangular-box concept and made some winged box kites that were designed for the military. Cody patented his man-lifting system in 1901.

The idea was that a human observer could provide an advantage on the battlefield by observing the enemy from a great height. The wings and vanes made the kites even more stable and suited to lifting heavy objects.

Actually, somebody did once go up under a Cody kite to more than 2,000 feet of altitude! Too bad the airplane was invented not many years later. A whole bunch of perfectly good Cody kites ended up in mothballs.

On the topic of airplanes, notice how similar the oldest of biplanes were to box kites. The planes were basically box kites with a tail and an engine added. That was no coincidence. Take, for example, the Bristol Boxkite, a famous old aircraft. The earliest plane inventors, including the Wright brothers, tinkered with kites while they planned and dreamed about what they really wanted to build!

Later in the history of box kites (during the early 20th. century) they were used for measuring atmospheric conditions such as wind velocity, temperature, barometric pressure, and humidity, at a range of altitudes. These kites were large, with oiled-silk sails and steel lines. They were highly stable, with great lifting power.

Another military application that can be found in box-kite history is the emergency kits issued to pilots in the Second World War, in the 1940s. Known as the Gibson Girl box kite, it could be flown by a pilot lost at sea, with an aerial suspended for a radio transmitter.

So if there was no wind, I guess the pilot had to paddle his life raft like a lunatic, while trying to make the radio call at the same time. I'm getting exhausted just thinking about it. (Just kidding—a helium balloon was also provided in the kit.)

Just about the whole time all this military stuff was going on, and up to this day, radio enthusiasts have used box kites for hoisting up aerials to a great height! I guess ham radio isn't as big as it once was, but there you have it, it's another application for box kites.

Homemade designs can look a little plain, like my Dowel Box for fresh winds, below. But it's still a blast to see your own creation scooting around up there, hauling the line tight in a fresh breeze. 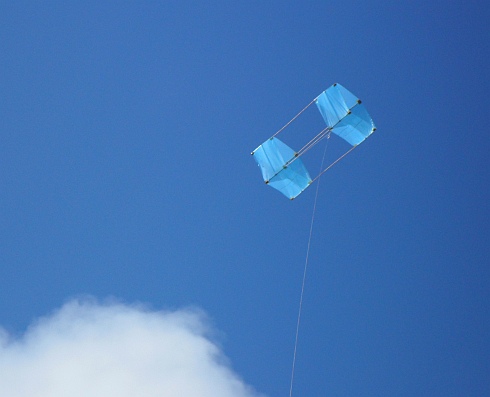 Another application that has been going on for quite some time is kite aerial photography or KAP. Designs based on the box kite can be good and stable in the air and so are ideal for suspending photographic gear. Mind you, these days weight isn't such an issue with lipstick cams and similar tiny devices being available! There are even some kits around that include kite, camera, and other necessary bits and pieces.

Since the year 2000, the history of box kites has seen a general trend for greater and greater variety in the weird and wonderful. There are spectacular, colorful, multi-celled, tumbling, and rotating works of aerial art! An example is the EO6, a commercially produced kite that is unstable in light winds. The flyer has fun by deliberately slackening and pulling the line to make the kite tumble and change direction.

And here's our giant 2.4 m (8 ft.) long MBK Multi-Dowel Box just hanging in there, near the bottom of its wind range: