The classic French military kite (FMK) is still made from time to time by box kite and ham-radio enthusiasts around the world. 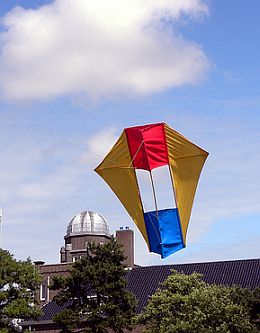 There's an old factory-built FMK in the photo, from the 60s actually.

In contrast to the old FMK in the photo, more modern designs would be much more efficient lifters, thanks to carbon-fiber spars and ripstop-nylon sail material. Polyester sail materials are becoming more common now as well—very strong, yet light!

Some people have called this design a cross between a diamond and a box kite, since the two "wings" do look just like the two halves of a diamond. In between these two wings is a simple two-celled triangular box kite.

This design is also known as the Pilot kite but is not to be confused with the four-cell parafoil pilot kites that help steady big semi-flying inflatables! The term "French Rescue" pops up as well, during online research.

Actually, there's a bit more involved in making such a triangular design rigid, if you're making one from scratch. That's interesting, since a simple square box kite has more sides so you would think it would be the more complex to brace!

Now, you might have heard of the conyne. This is a more general term for any box kite with wings, as far as I know. Of all the winged box kites, perhaps the delta conyne is the most popular. Instead of the two halves of a diamond, it's the two halves of a delta. At least, that is the way it looks from a distance. 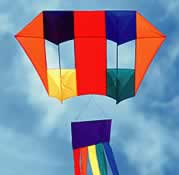 If you are interested in buying an FMK, there are a few designs which have made their way into online kite stores.

One of these is an even more purpose-built lifting kite—the double French military kite (DFMK). The photo is of a typical shop-bought DFMK.

A flat section is attached between two triangular two-cell kites, for some serious pulling power. Both the single and double versions have ripstop-nylon sails and fiberglass spars. Perhaps the double design sells pretty well because I had a hard time finding a decent picture of a single.

Oh, does the French military really use this kite? No, not any more, but they did use it for reconnaissance over 100 years ago!

If you thought this hobby went out with WWII, or perhaps the 60s, think again.

It seems that there are still a number of keen radio enthusiasts to be found, raising up long wires to transmit and receive signals. You can probably guess what's coming next.

Yes, the FMK (and DFMK) is quite suited to the task, being stable and strong! If even more lifting power is required (for example, if winds are a bit too light or the aerial is too heavy), more than one kite can be attached to form a "train" along the flying line.

Of course, hoisting long pieces of wire high into the sky is never done when there is any threat of lightning!

My closest brush with lightning was while sitting in an office, quite close to a brick wall on my right. All of a sudden, a bolt of lightning struck and destroyed the power transformer which was located in a metal box just 2 or 3 meters (7 to 10 feet) away, on the other side of the wall. Can you imagine the noise! I never want to get any closer than that.