The dopero kite has a well-earned reputation for being an excellent light-wind flyer. It flies at high line-angles like a delta and yet has very good stability and lifting capacity as well. 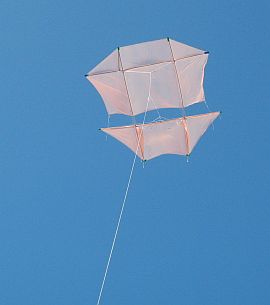 Modern doperos are often constructed from ripstop-nylon sail material and carbon-fiber spars for minimum weight. These are superb kites and they come at a price to match.

Many kite flyers choose to build one of the two original designs, straight from the plans. The larger one of these is known as the Ultra Light Maxi Dopero and is the ultimate light-wind kite for kite aerial photography (KAP). Or so some would argue.

However, the dopero kite is now available from a small number of kite shops and manufacturers. Some of these tend to be very high-quality kites, so they aren't cheap!

The dopero is basically two Pearson roller kites side by side. The name was extracted from the words DOuble PEarson ROller.

I never did get around to making a huge Multi-Dowel Dopero, but the 1.2 meter (4 feet) span Dowel Series kite in the photo is fun to fly. It's too small for serious KAP though.

You could be forgiven for thinking dopero means something in Spanish. If it does, it's unlikely to have anything to do with kites!

The photo of the purple-and-blue kite is courtesy of James Gentles. Can you tell he's a Scotsman? 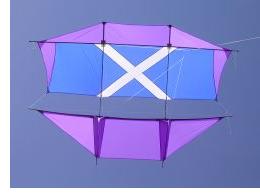 Size. The original dopero kite was under 3 meters (10 feet) in span. The Maxi was made shortly after and had a more impressive span of 3.75 meters (over 12 feet). Both sizes are copied today, with small variations.

Shape. There's not much to add here. People probably don't want to mess with the original shape too much, as they are after predictable performance. They want the kite to fly "as advertised"!

Construction. Some designs build a little extra strength in by using slightly thicker material for the main cross-spar. For example, 8 mm rod while all the others are 6 mm. Another refinement is using elastic material to connect spar segments together, to allow quicker assembly. This makes sense since the dopero has a reputation for being slightly more inconvenient to assemble than other similarly sized kites. I bet it's easier than a Cody though!

Using old-fashioned bamboo spars still results in a great light-wind kite, with the added advantage that they are tougher in the case of an accident. Bamboo is less expensive to replace too, of course!

The original Maxi version was built with two open vertical keels on the rear sail for even greater stability and prevention of over-flying.

Tails. As already mentioned, the dopero kite does not need tails. However, some like to add tails just for the visual effect. Also, KAP enthusiasts often add tails to kites that don't strictly need them, just for additional stability. You don't want to blur those pictures!

Decoration. Most of these kites made so far are valued for their flying characteristics rather than their looks. Hence the decoration is usually limited to simple areas of color and straight lines. With such a large area of sail though, there's nothing to stop someone from getting arty with one of these kites! They would have to be careful with weight though, to avoid spoiling the extreme low-wind performance. In fact, I have seen an image of a very ornately decorated dopero. I spotted it during an online image search and it was from a forum in the Middle East.

Bridle. The four-leg bridle consists of two loops with a connecting line—just like a simple four-leg rok bridle. The top loop connects to where the longerons cross the main cross spar. The other loop is connected at both ends to the longerons also, near or behind the leading edge of the rear sail. The flying line attaches to the connecting line. Some designs use a ring as a simple means of creating a shiftable towing point on the connecting line. If you know what you are doing, you can also use a shiftable friction knot instead, such as a Prusik knot.

Sail. Although ripstop nylon is a popular choice for the sail material, some of these kites have used the more expensive Icarex P31 material.

With the increased availability of these kites from shops now, don't be surprised to see one flying with no KAP rig attached. And why not. Everyone needs at least one kite to pull out on those nearly-dead-calm days!

Dopero-kite stories of my real-life flying experiences are worth checking out!

Even on windier days, a dopero kite still comes in handy for flying "line laundry." That is, inflatables, spinners, windsocks, and anything else with a bit of color and shape.

On the other hand, a lot of KAP is being done with these kites.

Some influential KAP people, such as Brooks Leffler, say it is the best light-wind kite they have ever flown for this purpose.

The large Maxi Dopero is a useful lifter even in the lightest breezes. Even though the kite can take a while to assemble, at least shots can be taken when other kites won't fly at all.

In a way, the history of the dopero kite goes way back to 1909, when its ancestor the Roloplan was first sold. The Roloplan was a German design which was copied and refined in the early 1970s to become the well-known Pearson roller. The roller was and still is a very good light-wind kite. 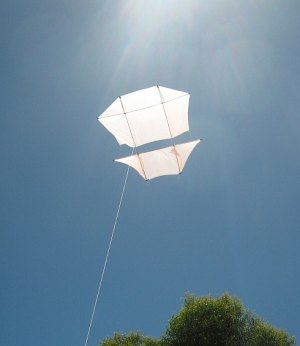 Finally, in 1994, a young German KAP enthusiast, Ralf Beutnagel, made a kite like two Pearson rollers side by side. This resulted in a somewhat bigger kite with four bridle attachment points instead of two. The extra lifting power was needed to get the camera gear aloft, the Pearson design being a bit too small for the job.

When comparing plans for the original Roloplan with those of a modern dopero, it's very easy to see the connection!

Plans for the original dopero design and a much larger Maxi version were published in the KAP magazine Aerial Eye late in the 1990s.

Driven mainly by demand from the KAP community, the dopero kite has been produced commercially since the millennium and remains a favorite light-wind kite for KAP.

In fact, in 2006 the dopero featured in a notable piece of KAP history. That was the recreation of the famous San Francisco earthquake photo of 1906. Scott Haefner used a dopero kite to hoist a 1.3 kg (3 pound) KAP rig in light winds, near to where the original panoramic photograph was taken.

Kite aerial photography enthusiasts like James Gentles are fond of this design.

There's our own homemade MBK Dowel Dopero in flight, in the video.