Delta kites have a well-deserved reputation for performance and easy flying. The simplest designs of this type aren't too hard to make either! 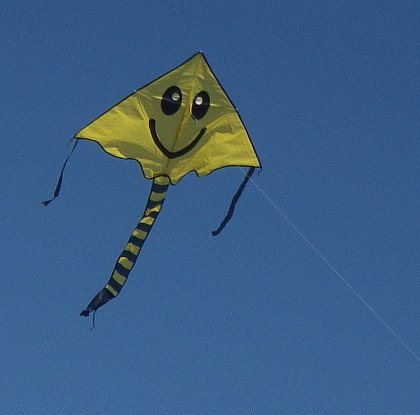 The simplest delta is just a triangular sheet of sail material with four sticks.

The two sticks along the front edge of the triangle are called leading-edge spars. The stick going down the middle is the vertical spar or spine. Finally, the stick which goes across from one side to the other is called the spreader since it keeps the leading edges spread apart.

The flying line is attached to the vertical spar at a little less than halfway from the nose end. A simple ribbon tail may be added if extra stability is needed.

That little triangular flap below the sail is the keel, which helps the kite point into the wind. But many modern deltas are keelless, relying on other design features to fly well.

We've been to a few big kite festivals over the years and taken plenty of photos—mainly from (or near) the Semaphore jetty in South Australia. There's a few deltas among them, so see below for a few examples which show some of the variety we saw.

Down below there are four big ones, each with a unique feature or two. Although most of these look quite similar in construction and shape, keen kite-makers still manage to find something to make their creation unique! 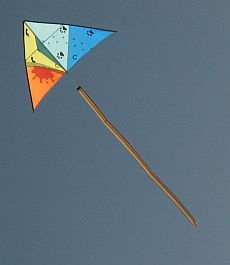 A typical large delta here, with the sail area put to good use! Arty details have been added over a colorful geometric backdrop. It's looking great with the sun's rays penetrating and lighting up the artwork.

The tubular tail helps stability, but good kite-makers always make sure that it also complements the artwork on the sail in form, color, or both.

The next kite shows show creativity in the form of the sail as well as the artwork. 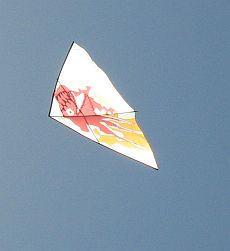 This delta also sports some clever artwork. In this case, there is nothing at all to distract from the art—no keel and no tail.

Unlike the previous kite, the leading-edge spars extend right up to the nose. Perhaps they are also connected to the central spar. Hence the flying characteristics might be a little different, with less flexing and shape changing during flight. 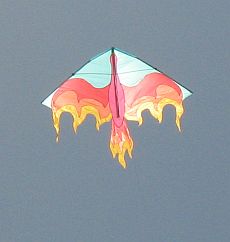 The trailing edges of this kite are also the flaming wings of the Phoenix. That flaming tail might not do a whole lot for stability but it sure completes the illusion of a bird in flight! The beak of the bird coincides with the nose of the kite as well.

On the day, the wind direction was just right. Hence I was able to get right underneath for a perfect plan-view photo from the jetty. 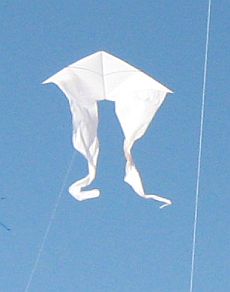 Finally, this huge white delta is a perfect example of the tails being integral to the design.

The two tails are attached to almost the complete width of the trailing edge. From a distance it looks like the sail and tails are all one piece, radiating whiteness like an airborne advertisement for Omo!

The spars on this design also appear to be connected at the nose.

The video shows our very big MBK Multi-Dowel Delta in flight. Listen to the sail rustle during gusts.