Rokkaku kites are dependable steep flyers and tailless. Here's a few we have seen over the years, with comments.

All roks have one vertical spar and two horizontal spars, forming a six-sided figure when covered with sail material.

Traditionally, the horizontal spars are bowed, with a bow string from tip to tip holding the curvature. Some modern rokkakus though use stiffer materials like carbon fiber, where it's more practical to use a fitting to hold the spars at a dihedral angle.

A simple rok, as they are known, isn't much harder to make than an Eddy diamond. There's just that extra horizontal piece and to more edges to the sail shape.

We've been to a few kite festivals over the years and taken plenty of photos. There are some rokkaku pictures among them, so see below for a few large and elaborately-decorated examples.

In theory, a single-leg bridle could work, but most roks have at least four-leg bridles to keep them steady in the air, like our Dowel Rokkaku design.

However, I have experimented with three-leg bridles too. These work fine for smaller designs, with two attachment points on the upper horizontal spar and the remaining one near the middle of the vertical spar.

Here are six rokkakus, each with a unique decorative design on the sail. Firstly, see the three roks with face designs from Japan. Yep, they are the "real deal." We saw these being flown by men in traditional kite-flying garb. Next comes a modern design, another traditional but non-face design, and finally an ad for a local kite shop! 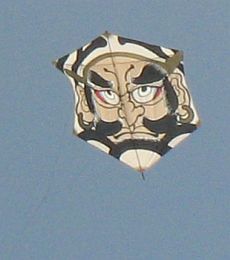 This stern sumarai looks like he is about to lop your head off with a sharp sword. At least, that was my first impression. It might actually be a Japanese deity or something else entirely! Anyway, it's a traditionally decorated Japanese rokkaku. 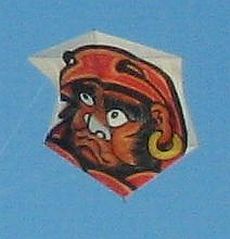 What is it with the white noses? This is another striking face on a rok kite. 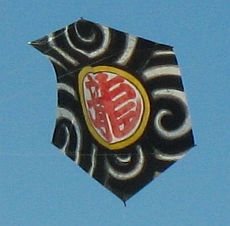 Distinctly Asian in form and color, the painting on this large rok really stood out against the pale-blue sky. Nice one! 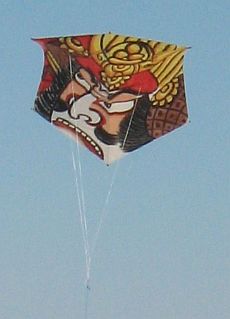 For reasons known only to the Japanese, this fearsome toothy character has powdered his nose completely white. It's another traditional rokkaku. 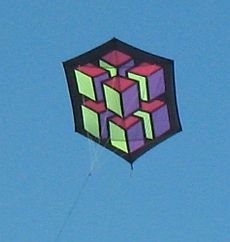 I really like this design—a simple but highly effective 3D graphic in bold colors. Perfect! 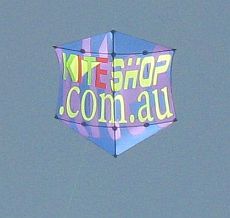 So it was advertising a local kite shop. What the heck, it's a very nice rok!

There's our big MBK Multi-Dowel Rokkaku in flight, in the video above.

That's about it for this page on rokkakus. I hope you enjoyed the pics!