I'm just guessing here, but the spar layout of the first barn-door kite might have looked like the beams on somebody's hay-shed door. 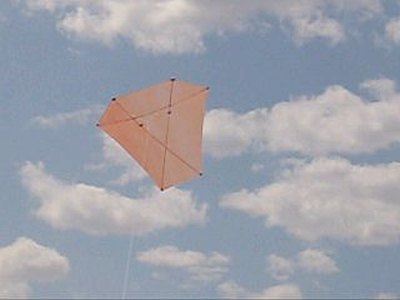 According to some authors, this kind of kite is the "traditional kite of America." Maybe this means it originated in the South of the United States where most of the crop farming has been done.

To speculate a bit more, perhaps the first of these kites was just a diamond kite with an extra vertical stick. Whatever the case may be, there is much in common between the two types of flat kites.

From a distance, some barn doors could even be mistaken for diamond kites, with the three-sided top looking somewhat like an old arch-top design.

The photo further down is a decent-sized hexagonal barn-door kite by Rod Beamguard. Rod had the photo taken at the Washington State International Kite Festival in 2004 and has kindly given permission for it to be displayed here.

The process for making one of these kites is very similar to making a diamond kite. There is just one more spar involved.

The extra spar and more complex bridling in these kites make them more rigid than two-stickers, which might help to explain why they have such a good wind range. With enough tail and a bit of bow in the cross spar as well, a barn door will put up with a lot of wind. It will still be up there when other simpler kites have been spun into the ground.

The most obvious variation in barn-door kites is the outline, which can be five or six sided. There's more detail on this and other variations below: 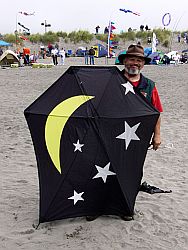 I don't know if any two-line barn door designs are commercially available, but I've come across at least one kite enthusiast who has made this unusual kind of stunt kite. However, this page is strictly about single-line barn doors!

Shape. The two diagonal spars can be arranged to meet at the top or bottom of the kite, or left parallel, or somewhere in between. This gives five basic pentagonal or hexagonal outlines. If all the spars cross in the same spot, it starts to look like a Chinese hexagonal kite. Hence, there are six variations in all. My original pentagonal barn-door had its skewers meeting at the bottom, with a single tail attached.

Construction. Like the diamond kite, using line around the spars to form the outline of the kite is optional and probably not often used on smaller kites. I certainly didn't bother, with the MBK kites.

Tails. The range of different shapes of barn-door kites means there are plenty of options for tails. Those with a point at the bottom obviously suit a single tail. All the other variations suit twin tails, with one attached to the bottom end of each oblique spar. Also, in this case, attaching a wide tail across the entire bottom edge is an option. I've seen some examples of this approach. In fact, the kite sail and tail can be the one piece of fabric, like a flat dragon or pennon kite. As with the diamond, decorative tassels or tails can be attached to the ends of the cross spar as well.

Decoration. Strips of different-colored material can be joined together before the outline is cut. The appliqué technique involves sticking light but colorful cutout patterns onto the sail material. Printed sail material can be used. Hand painting or airbrushing can be applied after the kite is constructed. There's a bunch of different ways to decorate a kite! The bigger the kite, the less difference the extra weight of decoration makes to its light-wind performance. Some of the bigger barn doors around today are dressed up very impressively! Shop-bought designs are available but not in the same variety as the more common diamond kite.

Bowed. Some barn-door kites are not terribly stable even with some tail, so the old trick of putting some bow in the cross spar is used. Like the tailless Eddy diamond kite, it is possible for some barn-door designs to fly with no tail at all.

Bridle. If you think for a moment about having three sticks crossed over each other, there are a whole lot of different ways to bridle one of these kites! Three bridle lines is the minimum, and some larger kites use up to five lines to keep the kite steady in the air.

Sail. Maybe some of the earliest kites used paper, but ripstop nylon would be the most common choice these days. To save money, plastic sheet from various kinds of bags can be used on small-to-medium-sized kites as well.

Since barn door-kites can be flat or bowed and made with a range of quite different proportions, there is considerable variation in their stability in the air.

Similarly, the various kinds of barn-door kites would have more or less of their sail area up front. Hence, they would tend to be correspondingly more or less stable.

Just like diamond kites, barn-door kites can be bowed to add more stability. That is, the cross spar can be bent back a little and held there with a string stretched from tip to tip. Even the most troublesome flat kite should fly well with enough bow and enough tail!

Barn-door kite stories of my real-life flying experiences are worth checking out!

Some barn doors, particularly large ones, are very efficient flyers. They can reach quite high line-angles, like a modern delta kite.

Other people have fun stringing together large numbers of barn-door kites in trains.

This reminds me of the Taiwanese guys at the 2007 Adelaide kite festival. They had a couple of very long trains of three-sticker kites up that day. One of the trains had the kites decorated to look like autumn leaves.

The individual kites were constructed somewhat like barn doors, but probably originated from traditional Chinese hexagonal kites. The kites did not have tails. Surprisingly, they didn't seem to be bowed either. Perhaps their construction was light enough to allow air pressure to supply the needed bow.

I also read somewhere about a guy who owned a train of 111 barn-door kites with prismatic appliqué decoration on them all. Whether they were shop bought or homemade I'm not sure, but they would make quite a sight in the right weather!

Barn doors are sometimes used for kite aerial photography (KAP). I certainly did a lot of that with my big MBK Multi-Dowel Barn Door!

There's at least one well-known kite maker who includes small barn-door kites as one of her favorites for teaching kids to make and fly kites. She must have settled on just the right proportions for sail and tail to get a tolerant flat kite for kids to fly.

Here's an interesting little snippet. Way back in the middle of last century, there was a Hi-Flier series of kites in the USA. Some people have taken it upon themselves to recreate some of these kites, including a certain Jolly Boy barn-door kite. Apparently, it flies really well, despite requiring plenty of tail.

I mentioned the murky origins of this design at the start of this page. They were probably around as early as the mid-1800s since by 1885 they were being used for scientific purposes.

A scientist called Alexander McAidie used flat barn-door kites for lifting meteorological instruments. He had a few headaches with them apparently! By the mid-1890s this kind of work was being done by tailless Eddy kites. The diamond-shaped Eddy kite had a bowed cross-spar for extra stability.

By the mid-1900s, making and flying barn-door kites had become an American pastime. Popular materials were thin strips of hardwood for the spars and paper for the sails. A cotton framing line was fitted into slots in the spar tips and the paper sail material folded over and glued.

In many families, the making of "two-sticker" diamonds would eventually give way to experimenting with "three-stickers" for extra challenge and fun. It was a hobby for young and old alike.

There in the video is our 1.2-meter (4-foot) high MBK Dowel Barn Door in flight. It's a great, reliable flyer!