Some History and Personal Experience

Firstly, what exactly is an Eddy kite? The original design was a large diamond-shaped kite from the 1800s which flew without a tail. 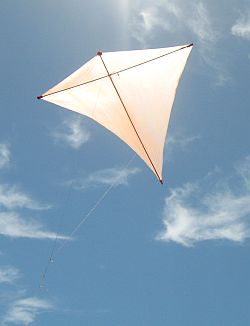 Unlike the historical Eddy, most retail diamonds these days are tailed. Most also have some dihedral or bow in the horizontal spar. This greatly helps stability and enables the use of shorter tails.

Our MBK Dowel Series of kites are all tailless, like the Eddy-inspired Dowel Diamond. That's an old version of it in the first photo on this page.

However, we have made some minor changes in a later version. They both fly beautifully in very light wind.

I remember on one occasion in the late afternoon, this kite floated right up to 400 feet, going almost overhead. At the time, there was barely a breath of wind at ground level!

In case you are curious about Eddy himself, here are a few interesting details: 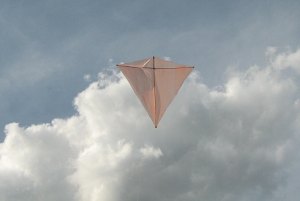 In some circles, the term Eddy is used more loosely to mean just about any kind of diamond kite. I first became aware of this when a European blogger featured my MBK 1-Skewer Diamond design in a post. A "little Eddy" he called it!

Why Make an Eddy Kite?

For a start, you won't find many truly Eddy-like designs in the shops. Tailed diamonds are the closest thing offered both online and offline. However, a good reason to make one is that the design is quite easy to build and results in a stable efficient kite.

For some additional fun, you can stack these kites together along one long flying line. An Eddy is a great light-to-moderate-wind flyer.

The Eddy kite was the inspiration for my original Dowel Diamond design, which you can see in the first photo on this page. It's hard to spot in the photo, but it had a two-leg bridle.

From a distance, the Dowel Diamond and the Eddy look very similar, but there are in fact a few differences. The Dowel Series kite has a plastic sail and tape edging. It's shape is quite close to Eddy's original, although the overall size is somewhat smaller. Some of the originals were almost 3 meters (9 feet) in height!

It's relaxing seeing the Dowel Diamond hang up there in a light breeze. Having a three-leg bridle, my most recent version doesn't waggle its wingtips like an authentic Eddy kite would do. See the video below. With a sliding knot on the bridle, it can be adjusted toward the nose a little if the breeze is stronger and threatening to overpower the kite. The 1.2-meter (4-foot) span sail generates a decent pull and can keep the line fairly straight, even with over 100 meters (330 feet) let out.

There's our MBK Dowel Diamond in flight, above.

Modern Versions of the Eddy Kite

It seems Eddy kites are everywhere. Some are bowed, while some are made with dihedral. People like to make them very colorful too, unlike yours truly who has stuck with pale orange for three series of eight kites each! Going overboard with decoration can turn even an Eddy into a lumbering moderate-wind kite though.

Sizes vary a lot too, with quite small versions being made for children and other enthusiasts tackling full 9-foot replicas of the original meteorological kites!

An interesting but simple variation of the Eddy kite is the single-point-bridle diamond. The flying line simply attaches to where the spars cross. The crossing point is 25% from the nose rather than the original 19% for these.

With sufficient bow and slightly slack sail these kites can still fly tailless, and therefore are perfect for flying in a stack or train.