Kite aerial photography (KAP) as a hobby attracts a whole range of enthusiasts. There are so many ways to do this! 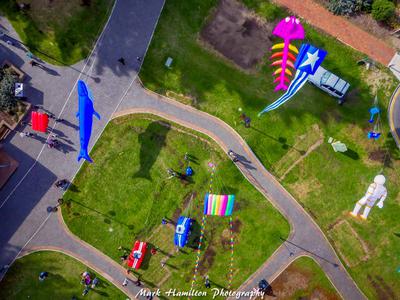 At one end, you have people who decide on a whim to hoist a cheap digital camera—or even their phone—from a single line attached to a kite. Any old kite that has enough lift, can be used. The 10-second timer goes off sometime during the kite's climb, and hey! an aerial photo results!

At the other end of the spectrum, the KAPer might be a serious photographer who patiently pans and clicks his expensive digital camera via a radio transmitter.

The kite might be an enormous Dopero or Rokkaku, "nailed to the sky" in a light breeze. A Picavet rig suspends the camera cradle and radio gear from the flying line rather than the kite itself.

Somewhere in between is the approach I take—lofting a rig under a half-Picavet suspension. Between flights, I pan the camera to a new angle for a different perspective for the fixed sequence of shots. The sequence is typically 20 shots at 10 or 15 second intervals. Just the sharpest and most interesting images are used.

Aerial Pictures Left By Others

Click below to see some intriguing aerial photos from other visitors to this page...

First KAP With 2.5 Meter Barn Door
Based on your flight reports with the Multi-Dowel Barn Door kite and my previous success with a scaled-up version of your Dopero, I decided to build a …

First KAP Was off the Cuff
Used a kite from a home watch dump run. People threw things like three kites with one parafoil which I used for this KAP. I used my apple phone with a …

KAP Images from Victor Harbour
Adelaide Kite Flyers Association were invited to fly at the Whale Time Playtime Festival at Victor Harbour on 29th May 2016. A great turn out by club …

RPI in the Snow
This picture was taken by a small canon running SDM (alternate firmware with a built in intervalometer). It was suspended by a pendulum, with a cradle …

Camera Eyes View
The camera swung around in the breeze and snapped the lifter. Still working on the KAP.

Cheapest KAP Available
I used about 2 ft. of electrical tape to attach my cell phone in video mode to my kite! Doesn't get much cheaper than that!

The Dizzy Camera on the PLT
Last year, I found plans for a "Peter Lynn Box Kite." At first, I discounted it thinking it looked too complex. Still, I kept running across this design …

Kitty Hawk KAP, on the Cheap!
Carabiner with a 10 second timer. It takes a lot of bad ones to get a decent aerial photo... But I got a few that were half-way decent. It does help that …

Melbourne Causeway Looking West
Home made rig on a picavet. Rig is static and doesn't move unless the wind blows it. I took 250 pictures of the roadway without catching the bridge. …