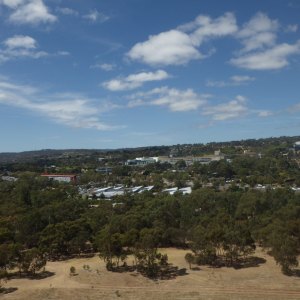 The first attempt to get good kite aerial photography (KAP) photos of Flinders University were foiled by the helicopter operations associated with the Flinders Medical Center. On this occasion, a field to the west of the complex allowed a view.

It was a view of sorts; the university is built on the side of a hill so the camera ended up looking straight across rather than down on it! Also, the prominent flat rooftops in the aerial images belong to buildings across South Road from the university grounds.

Some nice photos were obtained despite 80% of the building complex still being hidden from view. Maybe one day this will happen, by special arrangement with the operators of the Medical Center helicopter. We need to keep out of each other's way! In fact, those two large buildings in the middle of the photos belong to the Medical Center.

This day's KAP session was possibly the smoothest and most efficient ever. It just all went like clockwork. It was all over in two hours, including travel time to and from the site.

The panoramic photo below shows the recently-mowed field of dry weeds from where I anchored the kite. It was anchored to my foot actually, but that was OK since the whole flight was over in under fifteen minutes.

The dry field west of the University (click to enlarge)

The Flinders University complex was hidden behind a thick grove of trees which lined the flying field. They weren't that tall at all, as is clear in the aerial shots. The taller one in the image above was a slight concern though, since it was close to the middle of the field!

Before leaving home, an online weather station seemed to be indicating ideal wind speeds for the Multi-Dowel Barn Door kite. However, other weather stations in the area were showing gusts to well over 30 kph. Hence the Fresh Wind Sled was taken along as well. It pays to have a backup kite!

On arrival, winds were almost moderate and very gusty. Loud leaf noise emanated from trees all around. Bright sunshine was heating the ground too, making the air rougher and more of a challenge to fly in.

The wind direction was good, taking the kite well away from the power lines next to the main road. However, it later swung to almost become a southerly. Read the Flight Report below for more detail!

The temperature was very pleasant, being in the mid-20s.

Lifter: The 1.5 m (5 ft.) tall Fresh Wind Sled. On landing the KAP rig, the kite ended up on the ground so I didn't get around to photographing it in flight. The sled coped well with strong thermal conditions that sent it soaring high overhead to (ahem) slightly naughty altitudes—just for half a minute or so. The limit here is 400 feet, to give you some idea!

Take a look at my e-book Making Dowel Kites, to try some of these big simple kites for yourself.

KAP Rig: Bamboo-skewer cradle, suspended from a half-Picavet line. I use 20-pound braided Dacron, slipping through large shiny paper-clips. The camera was pointed to one side and angled down slightly as always.

Camera: Pentax Optio WG-2 with built-in intervalometer. For the aerial shots, EV was set to -0.7 and focus was fixed on infinity. Auto ISO ended up on 125 with a shutter speed of 1/1500.

Climbing out, halfway across the field.

This photo cropped to hilight the long building.

High enough to peek over a spur in the Adelaide Hills.

As is my custom, three panoramic photos were taken with the aid of a solid little chair on which I rested the camera. The best resulting image appears near the top of this page. See if you can spot two corners of the chair!

After laying down about 60 meters (200 feet) of line, I walked out with the camera, the bamboo cradle, and the Fresh Wind Sled kite.

For a few minutes after setting up the rig, it proved tricky to get the kite up. What happened to all that wind?! Should I fetch the Multi-Dowel Barn Door kite instead?

Fortunately, a big gust came through before long and up went the sled. Even so, it was a bit marginal below 100 feet, making a bit of line working and footwork necessary!

Up high, there was just enough average breeze strength to keep the Fresh Wind Sled flying. From time to time, it pulled hard as thermals dragged it much higher.

On one such power-climb, the KAP rig was raised to a 60-degree angle. It was an awesome sight really, with the twin bright-orange drogues stretched out below as the dark-blue kite rocketed up past a white cloudy backdrop.

The camera direction looked good, so I decided not to take a second sequence of photos. Also, the strong thermal conditions were a slight risk. Any sled is capable of folding up in midair if the air is rough enough!

Toward the end of the photo sequence, the wind direction started to shift.

The upside: a wider vista would be captured by the camera, giving more opportunity to pick interesting photos.

The downside: the kite was now flying almost parallel with the power lines along the main road! This prompted me to walk out into the field, holding the line, to take the kite to safer airspace.

At this point, the photo sequence was definitely finished so it was time to bring the kite down anyway.

Some minutes later, motorists on Marion Road were treated to the sight of a guy in a Kalahari hat carrying a chair and a garden hose reel across the road—plus a bag and a long blue package. It was just some random non-conformist, obviously.