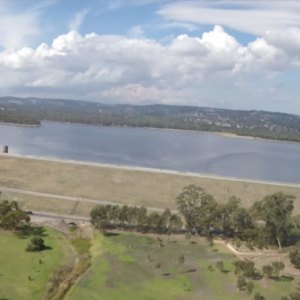 It seems that the right time of day to capture the Happy Valley Reservoir via kite aerial photography (KAP) is midday.

This is not for any weather-related reason, but because there are far fewer dog owners using the adjacent park at that time of day!

Usually, it's preferable to avoid the middle of the day since thermals tend to shift the kite around a lot more in the air. As KAPers know, a steady kite is a great boon to getting sharp photos!

The worst case, which actually happened here near the reservoir one day, is when the kite goes vertical and the KAP rig gets flung around at all kinds of crazy angles :-|

The panoramic photo below shows a small section of the pale-brown west embankment of the reservoir. It's in the distance, between the trees. Before the camera could snap the water surface, it had to climb high enough to see over the earthen mound.

The reserve west of the reservoir (click to enlarge)

Massive cumulus clouds boiled into the sky all up and down the Adelaide Hills, some of which you can see in the panorama up there. However, the sky was almost blue over most of Adelaide. Winds were light—very light, in fact. If it wasn't for the occasional thermal lifting off, the leaves would not have stirred most of the time.

The logical choice of kite was the Multi-Dowel Sled, since the barn door would not have even supported itself. The temperature must have been at least in the low 30s C, since getting the big kite away was sweaty work today. 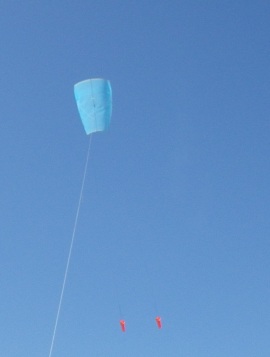 Lifter: The Multi-Dowel Sled kite, with small twin drogues. It just managed to limp into the air, in very light winds.

Take a look at the e-book Making Dowel Kites if you would like to make one of these big sleds for yourself.

Camera: Pentax Optio WG-2 with built-in intervalometer. EV was set to -1.0 on this occasion. Focus was fixed on infinity for the aerial shots.

Still no water in sight, but more of the park's surroundings swing into view.

The line is longer but the very light winds prevent any further height gain while line is being let out.

Video still shows the west–east extent of the reservoir, from 300 feet above ground.

Camera swing brings most of the northern reaches of the reservoir into view, plus some tennis courts.

Two panoramic photos were taken with the aid of a small solid chair, marked with the appropriate angles. The second one was almost perfect, and appears near the middle of this page. The panorama is three square images that the camera itself stitches together.

Next, I started to rig the Multi-Dowel Barn Door but soon switched to the Multi-Dowel Sled instead. Even then, launching was difficult. An entire sequence of 30 photos was taken—including a 10-minute delay—while the sled had many short flights and failed launches.

In the end, after an entire hour, persistence paid off and the huge kite clawed its way up after getting just clear of the treetops. This was achieved by taking the kite right out to the middle of the park, where an extra few kph of average wind speed did the trick. There were so many trees upwind!

Even with the kite successfully in the air, climbing it out was so slow that the camera spent a lot of time just moving out across the field at low altitude. Thirty frames was not enough on this occasion!

A second flight got the camera in the air again. This time it successfully took video of the Happy Valley Reservoir. Usually I keep the kite in the air during the changeover, anchored to my foot to leave my hands free. This time, however, the kite had flopped to the grass while I fiddled with the bamboo rig.

On the way up I noticed the KAP rig was at a strange angle. The cause was the 20-pound line suspending the rig had got wrapped around a corner of the bamboo tetrahedron. This was easily fixed, and soon the rig was on its way again.

With a lengthy 135 meters (550 feet) of line out, the huge blue sled managed to touch almost 60 degrees of line angle for just half a minute or so. This yielded some nice perspectives of the watery scene downwind. The extracted stills are not as good as photos, but it still felt good to capture a view of the Happy Valley Reservoir at last!