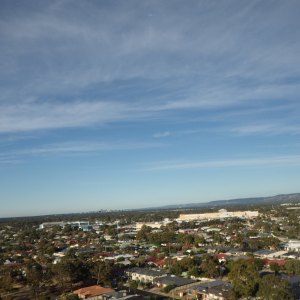 With light winds and sunny skies it was looking like a good opportunity for some more kite aerial photography (KAP). Perhaps another shot at the reservoir could be attempted?

Unfortunately, the ideal flying field had been taken over (yet again) by a group of dog owners. It was most likely a club. More people arrived as I sat in the car, trying to figure out where to go next.

A location that afforded a view of the Marion Shopping Center was finally selected. Another location was much closer but did not suit the sun's direction. There would have been too much glare spoiling the photos.

It looked like an afternoon for the big Multi-Dowel Barn Door kite. But things could lighten up considerably, so the Multi-Dowel Sled was selected as the backup kite.

As it turned out, the wind was fairly ideal for the big barn-door, although somewhat gusty at first.

Light winds were gusting into the high teens in kph. Thin high cloud was spread across much of the sky. The artificial variety was there too; a long thick vapor trail extended from west to east, almost as far as the eye could see. See the kite photo below!

Temperature was in the high 20s (C). Pleasant weather! It's often very hot at this time of year in Adelaide. 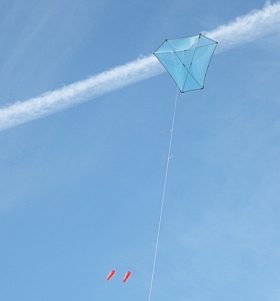 Lifter: The 2.4 m (8 ft.) span Multi-Dowel Barn Door kite, with drogues attached. I do nearly all KAP with drogues these days. Even if the kite doesn't absolutely need it, the extra drag steadies the kite's motion over all its wind range. Hence the KAP rig swings less.

Have a look at my e-book Making Dowel Kites, if you're interested in making a large cheap kite for KAP.

KAP Rig: Bamboo-skewer cage with glued-in paddle-pop sticks behind the camera to incline the field of view down a little. A half-Picavet suspension was attached to the line, as usual these days.

Conveniently, the wind direction shifted back and forth a little today, providing many perfectly framed shots! All the same, I tried a small tweak of the cradle direction on the second flight.

Camera: Pentax Optio WG-2 with built-in intervalometer. Two sets of 20 shots, at 10-second intervals, were done today. EV was left on -0.7. ISO was fixed on 125 and focus was fixed on infinity.

The first three images below were from the first flight, while the last one was from the second flight of the big barn-door kite. Most views were from just under 200 feet above the grass.

Click on a thumbnail image below to see it much larger:

Climbing away from the lush green grass.

At full height, the Adelaide CBD is near the horizon.

Further to the left, tall structures north of the city appear near the horizon.

Looking through a paper directory, an open space not far from Flinders University was clearly a possibility. On driving past however, it seemed pretty cramped, with a mini-forest of kite-catching trees lying in wait along one side—besides being overgrown with tall weeds!

With the afternoon sun getting lower, an easterly camera view was out of the question for capturing the Marion Shopping Center. But I spotted an oval in the suburbs to the southwest of the complex. It was worth a try!

The oval turned out to be a very well-kept area which was covered in short thick grass. Soon, the Multi-Dowel Barn Door was up, with the line out to 105 meters (350 feet). That was about the limit, to keep clear of the power lines bordering the field on two sides!

The first flight went well, although the kite was pushed around a few times by the last big thermals of the day. On a second flight, I tweaked the direction of the camera cradle a little, before letting it back up on the same line length as before.

This time, the air was noticeably smoother, with the KAP rig barely moving at times. Great! The kite was sitting at around a 50-degree angle, in fairly ideal wind speeds it seemed. The bright-orange drogues trailed out behind, on long lines to dampen out any tail wobbles.

On getting home, the images were good, but little detail of the Marion complex could be seen. However, the shots still had an interesting aspect, since some of them showed the shopping center, the nearby aquatic center, and the Adelaide CBD in the background.