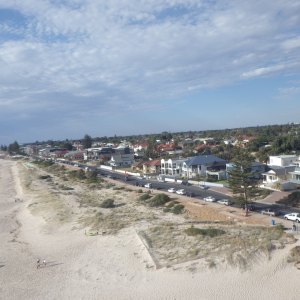 Rain and strengthening winds had been forecast for the next few days. So, with the sun still shining, it was time to head out for some kite aerial photography (KAP).

Brighton Beach had been visited a couple of times before, but without success. Oh, I got a short-format flight report or two out of the trips, but no great series of KAP photos, for one reason or another.

Today, going by online weather reports, wind gusts of up to 20 kph could be expected. That was at the airport station, a couple of suburbs away from Brighton. It looked like an afternoon for the big Multi-Dowel Barn Door kite.

The Multi-Dowel Sled was selected as the backup kite, in case the breeze got too light for the barn door. On the other hand, if things got fresher, the Fresh Wind Barn Door also happened to be in the car. It pays to be well prepared.

Well, the breeze did start to look lighter on the way to the beach! As it turned out, the wind lightened up even further throughout the session.

The panorama below shows the beach from where I was flying. In the enlarged image, see if you can spot the person walking their dog, who managed to appear in both frames 1 and 2! It takes me a few seconds to line up each of the three shots you see. In the meantime, objects move about.

Cloud cover was extensive but fairly thin by the time the kite flew. To my relief, fairly strong sunshine was peeping through from time to time. At least a few frames would be able to take advantage, as they fired off every 10 seconds.

Air temperature had peaked at around 30 degrees earlier in the day. With all the cloud around, it was not much cooler by late afternoon when the KAP rig was aloft.

A light SSW breeze gusted in from over the sea, reaching perhaps 12 kph at first but gradually lightening up as time passed. In fact, the breeze was extremely light at times, at ground level. After packing up, a quick check with the meter showed only 3.3 kph gusting to 3.8 kph! 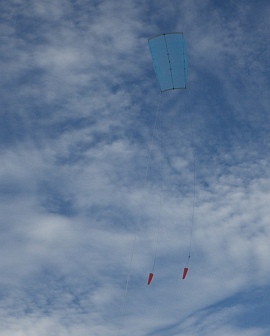 Lifter: The Multi-Dowel Sled kite, with drogues attached. Interestingly, the kite did not take kindly to having the KAP rig only 15 meters (50 feet) away today—instead of my usual 30 meters (100 feet). I hate to think what might have happened if the drogues had not been attached! Despite some excessive swinging around, fast shutter speeds still saved the day. All the shots were sharp.

Take a look at my e-book Making Dowel Kites, if you would like to put together your own big sled. Or you could try some other design; the barn-door kite is a good KAP workhorse too.

KAP Rig: Bamboo-skewer cage with glued-in paddle-pop sticks behind the camera to incline the field of view down a little. The suspension was half-Picavet as usual these days. On the second flight, I adjusted the camera's direction a little since it seemed to be pointing too far inland.

Camera: Pentax Optio WG-2 with built-in intervalometer. Two sets of 20 shots (at 10-second intervals) were done today. EV was at first set to -0.3 and then changed to -1.0. ISO was fixed on 200. Focus was fixed on infinity.

The first image below is from the first flight, while the others are from the second flight of the big sled kite. They show the camera's view from various altitudes, looking mainly straight up the beach—except when some rig swing brought the jetty into view!

The highest view was from just over 200 feet above the sand.

Click on a thumbnail image below to see it much larger:

The jetty comes into view.

More detail of the dunes and seaside houses.

Another peek at the jetty, from over 200 feet.

The houses show up nicely here.

The usual flying-line storage for KAP has been my trusty but awkward-to-carry hose reel. The reel is loaded with 200-pound braided Dacron, which is more than ample in strength for any of my kites. Today it was decided to fly on 90-pound Dacron, on a flat winder. That was not so convenient to get the line out quickly, but it could be carried onto the beach inside my gear bag. Strength-wise, it would be fine in the very light breeze—even with "The Horse" (the big sled) stretching it taut!

After selecting a launch site on the sand, I got busy with taking several panoramas. These consisted of three frames each, stitched together by the camera. The little marked chair helped with camera alignment as usual.

Soon the suspension lines were hooked on and camera inserted into the cradle. As always, the sled was easy to rig. This included securing each drogue line to a lower corner of the kite with a single half-hitch.

Holding the kite on 15 meters (50 feet) of line, I used an elbow and an arm to tweak the cradle around until it faced the proper direction. That was straight down the beach, in a roughly downwind direction. There would be no flying line making an appearance in these shots!

This was the first flight of the cradle with paddle-pop sticks taking the place of the usual thickly folded piece of paper. The permanently mounted sticks performed the same function—tilting the field of view down a little so more ground than sky would fill the frame for most shots.

Within half a minute it was clear that the big sled did not like the suspension point being just 15 meters (50 feet) from the kite—at least in fairly light air. The cradle hardly stopped its pronounced swinging during the ascent. This was despite decent line tension and the twin drogues doing their best to stop the kite's tail end from moving side to side.

The oscillations didn't get any worse, so I continued with the flight; the kite went out to 90 meters (300 feet) of line and a 45-degree flight angle. With more line out, the situation improved a little—but only a little.

Having allowed plenty of time for the camera to stop shooting, the kite was brought in. It happily flew on 15 meters (50 feet) from three turns around my left shoe while I changed the camera's EV setting to -1.0 for the second flight. This time I managed to get the camera away a bit quicker, bringing it to near maximum height before the 4-minute initial delay timed out. After that, it was taking one photo every ten seconds as usual.

This time I backed away, right to the water's edge, and let out a few extra meters of line. So, the kite was flying on roughly 100 meters (330 feet) and was still at about 45 degrees of angle. Or perhaps it was a fraction less, as the wind speed was now very marginal. I was so glad the sled was up! The barn door would have really started to struggle by this stage.

Eventually, the swinging camera was brought down and removed from the cradle with no problems. Finally relieved of the KAP-rig pendulum, the sled just parked itself at a high angle on the short line, almost motionless above the sand. The tide was coming in. After the briefest of thoughts about doing a third flight, it instead seemed like a good decision to "quit while I was ahead"!

A guy walked over, inquiring about the kind of kite that was now laid out on the sand. "An Allison Sled" was my reply. On getting closer and taking a look, he said "OH—a homemade job!". After a short conversation, I handed him a small flyer which identified myself and the website.

Not long afterward, the phone in my pocket vibrated as the kite widow tried to make contact. I'm just kidding; although she could not be called a kiting enthusiast, my wife, May, did actually fly her own $5 ship kite the other day.

It was a fairly relaxed KAP session in the end, despite the initial concerns about the swinging rig!