This kite aerial photography (KAP) excursion down to the small country town of Meningie in the southeast of South Australia taught us one thing in particular—when KAPing at events, do the photography first, then relax and fly a few kites just for the fun of it! 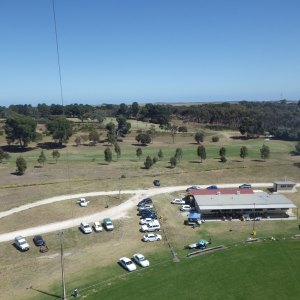 Anyway, we still obtained some usable shots of the fair and surrounding countryside. Even if more than half the visitors—and several stalls—had disappeared since opening time at 10 am.

The large Multi-Dowel Barn Door had been flying well, for perhaps half an hour or more. But when I went to use it to hoist the camera, there was a small problem.

A strong gust had caused a partial failure of one shoelace corner-tie. The kite would probably continue to stay up for some time. However, why risk an expensive camera? So, out came the Multi-Dowel Sled. Again.

The Multi-Dowel Sled is such a strong puller that it barely felt the twin drogue 'chutes that had been attached, even though they do a good job of reducing "tail wagging." Hence, on the first flight, the kite still ended up going vertical in a patch of rising air! Craning my neck, I could see the rig dangling awkwardly and pointing goodness knows where.

But all turned out well, as you will see.

The panoramic photo below shows much of the Meningie town oval, looking roughly north. It was an expanse of lush green grass. Our little home base is off to the left, complete with wind sock. Later, the aerial camera was lofted and pointed back toward the south, capturing bushland, hills, the football-club rooms, and the stalls of the small fair in progress.

Low down, conditions were quite different from higher up due to a low hill, trees, and buildings upwind. It soon became clear that the breeze was inconsistent, averaging around 15 kph at times, but dying off markedly at other times. This was not gustiness but a weather cycle over a longer time scale.

Just to add even more to the complexity of the wind speeds, large thermals started to drift over the oval from late morning onward. Of course, this added to the spectacle of the large kites we were flying, pushing them to almost vertical line angles from time to time.

There was a small amount of mid-level cloud about, early on, as you can see in the panorama above. However, most of this burnt off later in the day. Speaking of burning, we were a little careless and got burnt ourselves. It was a warm "Extreme UV" day, no doubt! And it's not even summer yet.

Wind speeds varied from very light to thermal-induced gusts to almost 30 kph, up where the kites were flying. These were challenging conditions for kite selection, but we were well prepared! Every airworthy Multi-Dowel kite had been brought along. 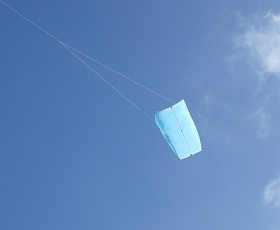 Lifter: The Multi-Dowel Sled kite, which you can see in the photo over there. Drogues were later attached to stop it wagging its tail end, which tends to swing the KAP rig around. The kite did a good job today, despite the active thermals.

Try my Making Dowel Kites e-book, to make the big sled or other designs for yourself. There are several Multi-Dowel designs in there.

KAP Rig: Bamboo-skewer cage with a wad of folded paper wedged in behind the camera to incline the field of view down a little. A half-Picavet suspension was used. On the second flight, I adjusted the camera's direction a little before letting it up. Actually, the kite continued to fly on 15 meters (50 feet) of line anchored to my shoe, while the cradle adjustment was done.

These images are a selection from the many taken on the day. They show the camera's view from various altitudes, looking roughly south from the town oval in Meningie.

Click on a thumbnail image below to see it much larger.

Climbing through 100 feet, as I walk the line. The rig was swinging a bit!

Flying from the railing. The camera's highest point was 250 feet.

Kite has lost a little height, but camera glimpses club rooms and stalls.

Similar shot again, but from a higher vantage point.

After laying out the line, the bamboo cradle was attached and the camera triggered. This gave three minutes to rig and launch the sled kite. A bit ambitious, but heck, it's a really quick rig so what could go wrong?

In the end, by the time I had actually got right back to the cradle on the grass, the camera had already shot most of its frames! I just don't know where the time went.

The first flight saw the huge sled, trailing twin bright-orange drogues, soar way overhead in a large thermal. This happened quite soon after launch. Can you imagine the KAP rig, dangling uselessly from a vertical flying-line! Eventually, the kite settled back to a more practical angle and all went well. Except, of course, the camera had stopping snapping after it had barely left the ground.

It's always a good idea to do at least two KAP flights. This is just in case something goes wrong with the first—which it had, on this occasion. So, with the sled floating about anchored to my left foot, a small directional adjustment was made to the cradle. Up it went again. I had rechecked the suspension lines as well, after the cradle's antics on the previous flight!

A good steady flight ensued, with the camera taking images at various altitudes. At first, this was due to the kite climbing as I walked back to the tether point, slipping the line through my hand. Later, the kite moved up and down in response to the varying wind-strength.

The walk out to lower the kite, running the 200-pound Dacron under my gloved hand, was uneventful. The bamboo cradle with the camera settled gently on the grass. The camera had powered down, having taken its last shot of the sequence a number of minutes before.

Another set of KAP images was "in the can"! Woo-hooo.