An Overview of the Gear Used

KAP equipment comprises a kite, a flying line, a camera, and a rig or cradle to suspend and operate the camera.

Regarding kites, my own method was to build large sparred kites from oak dowels and plastic sheet. The 2.4 m (8 ft.) span Multi-Dowel Barn Door and the 2.4 m tall Multi-Dowel Sled were the lifters for the majority of the KAP images on this site.

It might come as a surprise to learn that the camera is usually suspended from the flying line, not the kite itself. The advantage of this is that camera movement is damped somewhat, enabling more opportunities to get decent pictures. In other words, the camera doesn't move around in the air as much as the kite does.

Further down this page I take a brief look at the gear that KAPers use.

Aerial photography as a hobby has seen all sorts of cameras hoisted up there. In the early days, some big kites were used to lift rather heavy high-quality film cameras.

The explosion in cheap light digital cameras has had an impact on the hobby. It's not just the weight. These modern cameras take great pictures too.

Interestingly, zoom lenses are of little use in kite aerial photography. In fact, people often try to cram more scenery into the field of view by using wide-angle lenses, even fisheye lenses. Another popular technique is photo stitching, where a number of images are combined into one super-wide panorama.

Having said all that about zoom lenses, it really doesn't matter so much at the cheaper end of the scale. Most digicams these days do have optical zoom, but the whole package is quite light. And if you are not a pro photographer, who cares about a tiny, almost unnoticeable loss of image quality.

The Rig or Cradle

A piece of KAP equipment commonly used by serious photographers is the Picavet. Yes, it was invented by a Frenchman in the early 20th century. However, it wasn't until the late 20th century that it was rediscovered and put to widespread use in KAP rigs. Its purpose is to provide a stable and level platform for the camera, while suspended from the flying line.

The biggest problem with taking only a limited number of photos per flight is wasting some of them due to camera movement. Unless the air is perfectly smooth, there is always some swinging and swaying from time to time. Hence, some aerial photography enthusiasts try to add other devices to reduce the movement and give more opportunity for getting good pictures.

One such device is the Jones Airfoils KAP Feather. "Put a feather in your KAP!" they say har har hardy har. Jokes aside, this interesting piece of KAP equipment uses materials that let a bit of air through, to reduce the effect of wind gusts. Also, it acts as a vane to keep the rig pointing into wind in a more steady fashion. The end result is what KAPers love—a camera "nailed to the sky." The kite might be constantly shifting here and there in response to gusts and turbulence, but the camera's view shifts slowly. 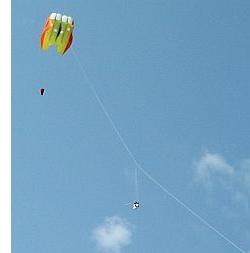 In theory, any moderately-sized kite that flies can be used to raise a small weight, such as a camera. However, some are better than others for the purpose of taking pictures.

For many KAPers, photography is the main thing, and they want an easy, no-fuss, stable kite that can lift the required weight over a wide wind range. Anything less would get in the way of taking good pictures.

For these reasons, parafoil or flowform kites are very popular in kite aerial photography. With no spars and therefore no assembly required, you just turn up somewhere and get your camera in the air straight away.

The photo shows a Sutton flowform kite with KAP rig. Thanks to Bruce Owen, an archaeologist, and his wife for supplying this picture of KAP equipment.

These kites are convenient to transport as well, since they roll up into a small bag. Another advantage is that they are tolerant of quite strong winds. 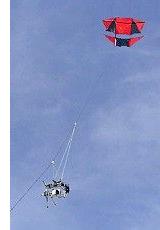 I've seen examples of many other high-lift kites being used as well.

Big rokkaku kites, delta conynes and the commonly seen delta kite have all been used. All of these can fly at much better line angles than most flowform kites, but that's not necessarily a good reason for using them in kite aerial photography.

Not everybody lives in a windy location, so there are some who specialize in getting photos in even very light breezes.

One of the best kites for this is the dopero, or double Pearson roller as it was originally called. Not only can this kite hang up there in the slightest breeze, it can lift a useful amount of gear at the same time.

Finally, it's handy to know what the average wind strength is. The wind speed is always changing from moment to moment, and it's hard to estimate with any accuracy.

With a little device called an anemometer or wind-speed meter you can decide what kite and camera rig to put up. In stronger winds, it can help you decide whether to attempt flying at all. Kites and cameras can get lost when the flying line snaps!

Have you ever dabbled with dangling a camera from a kite or flying line? 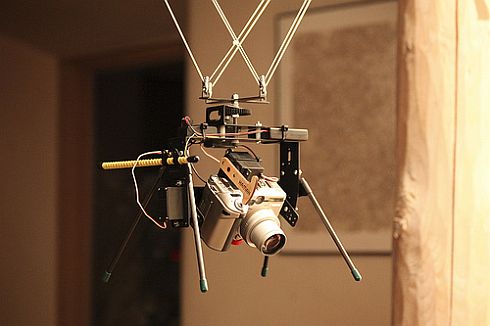