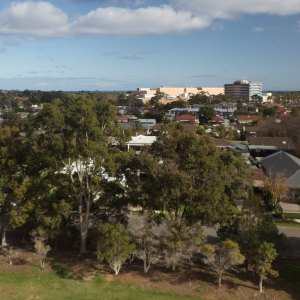 "Marion Shopping Centre" is spelled the Aussie way, since it's local! After having this particular kite aerial photography (KAP) shoot in mind for quite a few weeks now, a few months even, the time finally arrived this morning. The session almost didn't get started, however.

A large ride-on lawnmower was stopping and starting all over the main football field that had been singled out as the best flying spot close enough to the big shopping complex.

On driving around the big club buildings to the other grassed area, it seemed a school sports class was in progress. The thought had been to at least pull out the Fresh Wind Sled and fly it on a shorter line in order to post something today!

However, with not a lot of time to spare, things did turn out OK.

This flying location was only a couple of streets away from the subject, unlike the first attempt several months ago. Being east of the subject, the camera direction required a morning time slot to avoid glare from the sun.

Skies over the Marion Shopping Centre were largely cloud-free earlier in the morning. Even toward midday, as these photos were taken, there was plenty of sun with only a few shots showing areas of shadow across the ground below. A cool breeze was blowing, in the low-to-mid teens in terms of kph. Higher up, there were gusts into the low 20s it seemed.

There is no panoramic photo to show this time, since I forgot to bring the small chair. Without it, or some other suitable bit of hardware, it's nearly impossible to keep the three frames aligned for the shot.

Despite winter being close, the sunny conditions resulted in plenty of gentle thermal activity, which moved the kite to higher line angles from time to time. 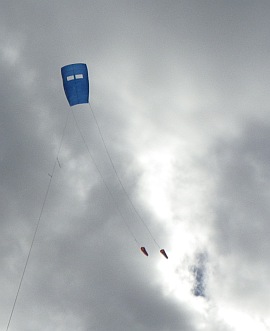 Lifter: The Fresh Wind Sled kite, which is almost always flown with drogues. For KAP, drogues can only improve the shots anyway, by providing steadier line motion for the KAP rig.

KAP Rig: Bamboo-skewer cradle, suspended from a light half-Picavet line. The camera was pointed more-or-less sideways on this occasion. A circular-polarizing filter was attached over the camera lens for the first flight, then removed for the second. Due to the position of the sun, the polarizing effect was fairly subtle. The camera direction was tweaked for the second flight, since it seemed off a little.

Camera: Pentax Optio WG-2 with built-in intervalometer. Focus was fixed on infinity and EV accidentally left on 0.0 for the aerial shots. Oops. At least the presence of the filter dropped the brightness of the image by a stop or so. The usual ISO at 125–200 was used. However, the clouds and the filter resulted in a variety of shutter speeds from 1/640 right up to 1/1250. I hope I have picked the sharpest images, regardless!

Click on the thumbnail images below to see them much larger. The first three were cropped to remove the tip of the wooden clothes peg which held the polarizing filter over the sports-camera lens! One day I'll get a real camera:

On the way up, with the horizon still below the top parts of the buildings.

At 200 feet, bringing the ocean water of Gulf St. Vincent into view.

More heavily cropped to zero in on the buildings.

From 250 feet, the subject surrounded by shadow but illuminated by sun!

On arrival at the football club complex, the main oval was not available due to grounds work being done. Eventually, running out of time, I returned once more to what seemed the lesser flying location, on the other side of the club buildings. Coincidentally, it was also closer to the subject matter of the photo shoot, which was a bonus.

The school kids were gone, and ... the southerly wind direction was perfect for using the full length of the area! It wasn't so constricting after all. I hastily connected the KAP rig, inserted the camera, and got the kite up. Being a sled, rig time was zero of course.

For the first time, the camera was peering through a polarizing filter. The plan was to take a sequence with the filter, then remove it for another sequence of shots.

Due to trees upwind, the kite needed plenty of encouragement to climb into clear air, but soon it was away. The photos showed that I had used most of the initial 4-minute timer delay doing this, since the first few frames were from below treetop height! After that, the climbout was easy. The Fresh Wind Sled was biting into just enough wind speed to pull firmly and rise steadily.

Near the top of the climb, the distant water of the Gulf St. Vincent came into view behind the Marion Shopping Centre complex. Sunlight glinted brightly off the camera casing as the rig swayed gently about, high above the damp green grass.

People were coming and going, to and from the club buildings. They were treated to a fine neck-bending view of the large blue sled doing its stately thing, trailing twin orange drogue 'chutes. The drogues were staying untangled for a change. Perhaps this was because the kite was enjoying a very comfortable range of wind speeds today.

With the kite near the bottom of its wind range for much of the time, bringing it down to get at the KAP rig was easily done. No gloves or carabiner were required. After a minute or two to remove the polarizing filter and tweak the direction of the camera, up it went again. This time, the 4-minute delay did not run out until the rig was at full height. Mind you, thermals and wind changes were coming through all the time now, so the height of the kite and rig kept changing from minute to minute—as did the tension in the line.

Having moved to one side and a considerable distance away from the hose reel holding the line, nearly all the 200-pound braided Dacron had come off. Somewhere around 500 feet that would be, although the kite was just over 300 feet up, on around 400 feet of line. The last job of the session was winding all that line back on, which was ... uuhm ... back-aching work!

So, the Westfield Marion shopping complex had been "done" from a reasonably close location at last. To get really great shots, you would need to fly from the far corner of the property itself. That would be risky and probably against a few local bylaws!