Kite photography enthusiasts set out to capture interesting or historic scenes from the air. It could be an unusual landscape with features that can only be seen from the air. Or perhaps it might be a famous castle or an interesting modern building complex.

Web-surfing for aerial photos one day, one photograph really caught my eye...

It was an air-to-air shot of a big flowform kite at a kite festival. The flying kite takes up most of the frame, with the beach and ant-like crowd far below. This is a reversal of the usual "people on the sand, with kites far away in the sky"!

Just a few years later, I discovered how fun it was to do KAP at a kite festival. Opportunities abounded for getting air-to-air shots of large kites. Sometimes there were plenty of ant-like humans in shot as well! That's not to mention other kites at various distances and sizes. One such shot ended up being the background image for my PC desktop for quite a while :-) 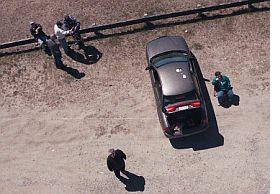 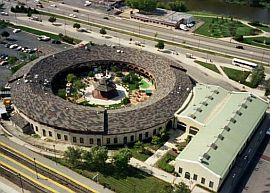 Looking around at some KAP images on the web, I found that many hobbyists have a fascination with photographing themselves from the kite while it is still very low! For example, take a look at the first photo up there.

Another quite common class of shot is the architectural view—large buildings from unusual angles, in other words! Or perhaps spectacular buildings, extremely old buildings, or buildings in magnificent settings might be captured. And so on. Aerial photography using kites is open to a lot of creativity. See the second photo up there.

Others are even more creative and try hard to make artistic statements with their best pictures. For example, a collection of brightly colored sailing-boat sails on the beach, with the boats themselves largely hidden. Sometimes, fisheye lenses are used to good effect, and filters can completely alter the tone of the scene. The artistry can be more important than the subject matter, in some cases.

Talking about boats, here's an interesting aerial shot of hulls from an unusual angle: 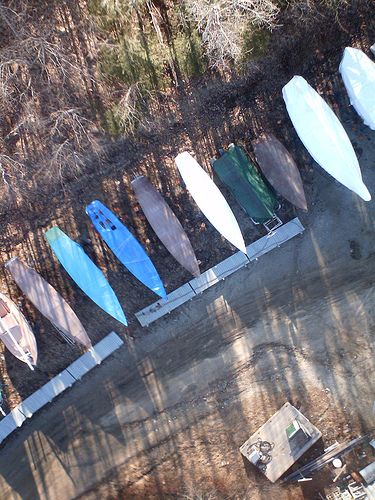 Digital cameras are widely used in aerial photography using kites. In fact, their use in KAP has pretty much stayed in step with their popularity with the general public.

Initially, the cheaper cameras just couldn't take a decent picture compared to a 35 mm film camera. As we all know, that is not the case now! Most people worldwide are enthusiastically snapping digital pictures, from cameras, phones and other devices.