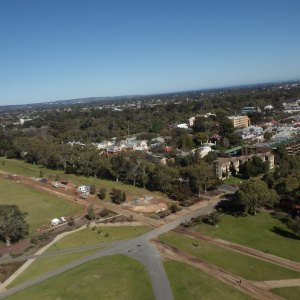 Adelaide CBD from the east

A kite aerial photography (KAP) shoot from the eastern parklands of the Adelaide CBD had been on the cards for several weeks. Being the middle of winter though, the weather had foiled several opportunities. A morning time slot was required, to keep the sun out of the shots.

With school holidays finished and an unusually blue sky for this time of year, the city parklands beckoned! Both big sled kites were tossed in the car, along with the garden-hose reel carrying 200-pound braided Dacron line. One of the kites would surely suit the breeze.

It was hoped that some interesting detail of the area around North Terrace might be captured. However, my camera pointing was a little off. Hence, the shoot mainly recorded the southern portions of the city square-mile!

Perhaps this was not my very best KAP effort, but these perspectives of Adelaide are rarely seen. So why not publish them.

A bit of a walk was necessary to get into position. Hence, the small but rather heavy yellow chair I use for multi-image panoramas had been left at home. However, one of the first flights recorded several images from just above the grass. One of these images was cropped down a bit to give an indication of the view from the launch point. 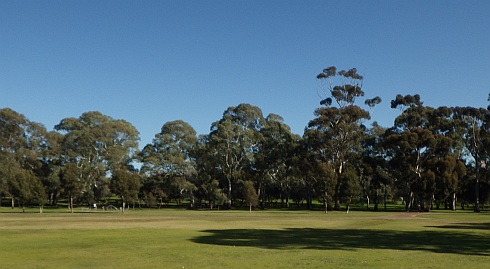 Just beyond the trees lies—the city of Adelaide! (Click to enlarge)

An online weather site had shown light winds gusting up 18 kph just before I left for the half-hour trip to the city. Maximum temperature was to be 17 degrees C. In fact, on the return trip (just after midday) the car's outside temperature reading showed 18 degrees—and climbing.

Boisterous gusts whipping across the grass led me to initially try the Fresh Wind Sled. But it turned out to just be the passing of moderately strong thermals. The average wind strength definitely suited the big Multi-Dowel Sled kite, a light-wind design.

A quick check with the wind meter revealed a gust to 17.4 kph. Perhaps gusts were reaching the low 20's higher up. There was certainly plenty of leaf noise in the tall trees of the area.

With no clouds obscuring the sun, the weather was quite consistent the whole time. If anything, the thermal activity got a little stronger as time wore on and the ground heated up further.

The longer patches of grass were still liberally covered in wetness. This felt a bit strange on such a sunny day! 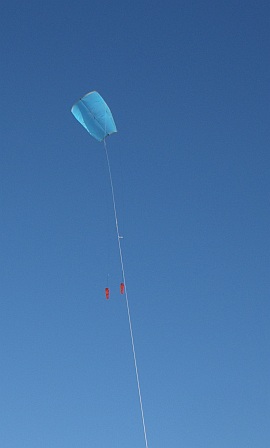 Lifter: The Fresh Wind Sled kite was the first in the air, but it was too difficult to get sufficient height. Big lulls in wind speed kept bringing the kite down. Hence the much larger Multi-Dowel Sled was eventually launched. This kite went straight to the maximum legal altitude!

Take a look at my e-book Making Dowel Kites, if you are interested in making any of these large kites for yourself.

Vertical gusts pulled strong tension into the line, causing it to buzz at times. The drogues helped keep the kite steady and downwind a little, so it stayed inflated. Otherwise, there is a small chance it can become a big "pile of washing" directly overhead—in freefall!

KAP Rig: The trusty bamboo skewer cage with two arms now missing. After a previous KAP session, one arm was broken off accidentally while packing away, so the other was removed also to maintain balance. The half-Picavet suspension line was then transferred to the remaining arms.

Camera: Pentax Optio WG-2 with built-in intervalometer. EV was set to -0.7 which is now my standard for KAP in bright sunlight. For all shots ISO was on 125, shutter speed 1/1500th and focus was fixed on infinity.

These images are samples of what the city of Adelaide looks like from between 200 and 300 feet over the eastern parklands.

Direction off and kite still low but shows some parklands detail.

Southern half of the city square-mile.

As already mentioned, the Fresh Wind Sled was the first kite up. The reason being that once up high, it might encounter just enough average breeze strength to sustain a long flight. Unfortunately, this did not work out. The camera managed a few shots from just off the grass, but soon both camera and kite were back on the ground.

Most photos were closeups of the green grass as the cradle just stood on the ground. One image even featured a glorious portrait of my casual shoes. A fat magpie stood just meters away, poked its beak skywards and studied the low-flying sled for a moment before deciding to fly away.

A second attempt was made with the Fresh Wind Sled. This time at least half the shots were aerial. However, there just wasn't enough wind for the big blue kite. So, it was time to put up an even bigger sail. The light-wind Multi-Dowel Sled was fetched and unfurled.

This had turned into a slightly awkward situation. Only the bigger kite would easily launch and gain height in the low average wind-speed. But some of the gusts were quite strong which would make the huge sled pull like a bull! Still, there wasn't any other option if any decent KAP was going to happen.

As expected, getting the bigger kite to full height was easy. At this point the flying line was anchored to a small tree. Also as expected, the kite went very steep and cranked up the tension in the line.

While getting the kite down for a second photo sequence, the carabiner ran hot as I ran it along the line toward the kite. On my way back, with the second photo sequence primed to go off, the line pulled so hard that I felt my weight on the ground decrease momentarily! A short detour let me pick up the Fresh Wind Sled off the grass before taking it back to the tree-trunk tether point. No trees were harmed in the process of doing this KAP shoot :-)

With the camera dangling around 300 feet up and doing its thing, it was time to grab a few relaxing minutes. It was an opportunity to munch a banana, observe the aerial action, and text my wife to pop outside her office block to try and spot the kite!

Finally, it was time to bring the KAP rig down once again. This done, a few turns of line around a foot enabled me to photograph the still-flying sled a few times. After this, it was just a matter of making sure nothing was left behind on the field before returning home.