In the Air or on the Wall

Chinese kites have been made and flown for many centuries as a part of the national culture. According to historical records, this has spanned more than 2,300 years.

For a long time, most Chinese kites have been flying works of art. Real art that is, as proven by the fact they could be found in many art collections around China. A good example was when the Yanhuang art museum in Beijing ran a kite exhibition.

History aside, people in China fly kites these days for very similar reasons to anyone else in the world. It's fun, and it can be recreation for the whole family. Also, for some, there is the satisfaction of actually building the kite. 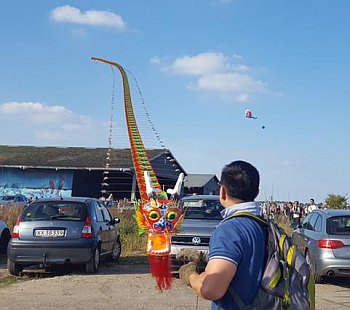 Traditionally, kite flying was believed to be good for people's health, and this view is still held by some. This is a bit like some Westerners regarding laughter as being beneficial; who hasn't read something about that at one time or another. Some of the traditional benefits of Chinese kite-flying include

Some of the traditional bamboo-and-silk hand-painted creations made today have hardly changed from those flown many hundreds of years ago. There's one in the picture.

Copies of these ancient kites, some more elaborate than others, are still being manufactured in China.

In the West, the Chinese dragon kite has had great influence. As a result, everyone from children to experienced kite-makers are flying very modern dragon kites!

It's interesting trying to classify these kites, since the Chinese themselves have come up with so many different ways to do this. Maybe that's not so surprising, since it's a big country and they have had so long to do it! I've found a few commonly used kite groups, so let's start with the most general first.

OK, there are two major categories: kites with detachable wings and those with fixed wings. The detachable variety are easy to pack away and are often given as presents. That's a very Chinese thing to do; I know, I have a Chinese mother-in-law! The kites with fixed wings tend to fly a bit better, at the cost of being less convenient to transport around.

Other people will tell you there are actually four categories:

Spectacular long Chinese dragons are an example of the centipede type of kite.

Modern Western kites are getting fancier, and some certainly make an impressive colorful sight in the air. Calling them "art" has been controversial for some time.

But there is a growing connection between art and kiting in the West. This has been especially true since the 1999 Millennium Exhibition in the USA where some very well-known artists were invited to create an "art kite" as an exhibit.

Also, some years later, there was the WindArt Kite Festival in Florida, USA. Kite-makers and artists came together to create original flying works of art.

Fussier people will say "no, actually there are eight different groups of Chinese kites being flown today." I'll just list these off here:

If you drop the last two categories, you're back to something pretty close to the four-category list. Those musical types of kites originate from just a few particular localities in China.

Are you ready to go "over the top" in kite classification? According to one source I came across, there are no less than 300 varieties of kites in China! This system takes into account groups of kites such as human figures, fish, insects, birds, animals, written characters, and so on.

There is a range of standard sizes too, ranging from extra large right down to miniature. The biggest take a team of men to fly; the smallest are just the size of the palm of your hand. At a kite festival I went to once, the commentator mentioned a Thai kite festival where she saw a military tank anchoring a ridiculously big Asian kite!

Traditional kite handicraft has flourished in three Chinese cities in particular. They are Tianjin, Beijing, and Weifang. The history of kites in China is a very long one. 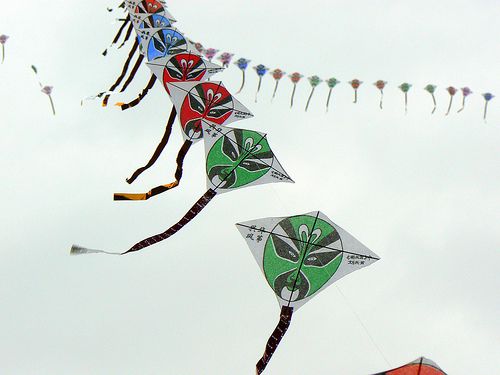 Chinese kites with Western influence,
courtesy of Will Clayton

Another location not to be missed if you are traveling in China (and have an interest in kites) is the city of Xian. This old city is the capital of Shaanxi Province, with a history going back no less than 3,100 years according to some sources!

Let's see, my home city of Adelaide was established sometime in ... the 1800s—no comparison!

Even in the West, making Chinese kites to a high standard is sometimes attempted by some keen artistic types.

Kiting in East and West has really started to melt together. Do you want an example? A traveler in Xian captured that photo of  Western-style diamond kites decorated with traditional Chinese designs.

Kites can be seen flying during the day and at night at various locations around Xian. Sometimes, these are of the spectacular centipede variety. In the parks, on shorter lines, you might find kids flying simpler creations.