The history of Chinese kites stretches over thousands of years, so I'm dividing this up into blocks of 1,000 years!

China has a very long literary tradition, so the facts below are based on a number of specific events that are recorded in ancient Chinese books.

Some scholars with an interest in the history of Chinese kites have done all the hard work, so here's a nice simple overall history.

Bear in mind that the earliest "facts" recorded here are not universally accepted. Some well-educated kite researchers would argue that it is often difficult to distinguish between solid history and writings that are merely based on or triggered by real events.

Somewhere between 770 BC and 221 BC large wooden kites called muyuan were invented for military purposes. This period actually contained two separate periods of Chinese history, the Spring and Autumn Period (770–476 BC) and the following Warring States Period (475–221 BC). Kites were seen as technology, and it seems the first ones were invented in the province of Shandong.

There is a record of a certain master of joinery named Mu Zi who developed a man-lifting kite over a period of three years. It was called the "wooden black eard kite." At least one more kite of this design was made in later years by other craftsmen.

There is a record of further development of these kites during the Chu-Han War of 203–202 BC. Besides spying on enemy positions, kites were sometimes used to deliver urgent messages. How was that done? Maybe there was a guy suspended from the kite cranking out Morse code on a Chinese lantern ;-) Sorry, I'm just trying to lighten up this deathly-dull history for you!

The first century AD contained the prosperous Tang Dynasty (618–907). During this time, all kinds of people discovered the simple enjoyment of kite flying. The traditional bamboo and paper (or bamboo and silk) style of kite had its origin way back here.

Later in the history of Chinese kites, people came up with more designs and new ideas, such as the musical kite. There's a record of a palace worker in the 900s AD who fixed bamboo pipes to a kite. When flown, the pipes would make a sound in the wind, like the zheng, a stringed instrument. Ever since then, the word for kite in Chinese has been fengzheng.

Maybe there were some simple kites flown by ordinary people in this period. However, the 900s are known for the introduction of silk-covered kites with beautiful and detailed hand-painted designs. These kites also carried many ornate accessories such as streamers and ribbons. So much went into these kites that it's likely they were only made and used by the royalty and aristocracy of the time. In a word, these kites were expensive.

The history of Chinese kites after 1000 AD saw kites becoming more popular in all levels of Chinese society. If you couldn't afford silk, you could always use paper! Some time after this, kite flying became a seasonal activity. Most flying was done during and after Chinese New Year and through to March or April. For some areas of China, the winds were better for kite flying at these times.

Finally, there sprung up a belief that kite flying was good for your health. This was around the time of the Qing Dynasty (1644–1911). Other somewhat superstitious ideas were around at this time too. For example, letting go of the kite string might get rid of back luck or illness as the kite drifted away. On the other hand, picking up a kite lost by someone else would bring bad luck!

By the late 1900s, the Chinese had organized large kite-flying festivals where the whole range of kites were on show. The keenest kite makers would show off their best kites. Thia was just like other kite festivals around the world do now.

It's hard to beat large Chinese dragon kites for sheer spectacle! One of these was over 300 meters (1,000 feet) long and won first place in an international kite festival held in Italy. The same kite can still be seen in the Weifang Kite Museum.

Although all the traditional forms of Chinese kites can still be seen, some Chinese kite makers are getting more adventurous. New innovative designs, art kites, and novelty designs are appearing. This is just like the Western kite scene. With travel and communication so easy these days, I guess Eastern and Western kite making is bound to merge together even more in the future!

The history of Chinese kites features yearly festivals. These are still popular, for example, there is the World Kite Festival at Weifang, in Shandong Province. Shandong?! Hey, that's where the very first kites that we know about were constructed and flown. How about that—full circle.

To see the artifacts of Chinese kite history purely as art, you can see a great display at the International Kite Museum, also in WeiFang. You can walk down the halls and visually take in much of the history of Chinese kites. 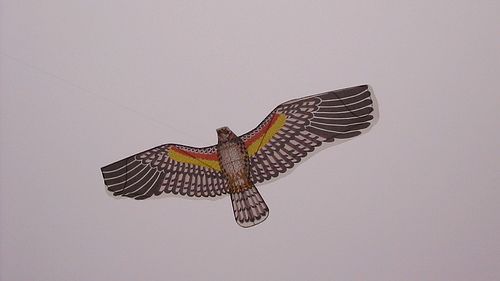