Fancy 3D and Others

The modern Western dragon kite is an entirely different beast to the traditional Chinese variety. However, a large and detailed one is still a great head-turner! This is particularly true if it is of the 3D variety. 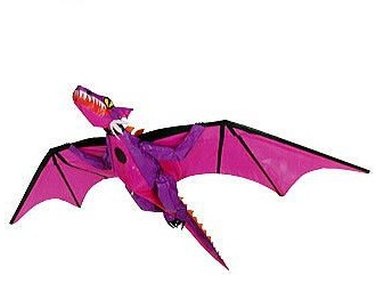 These colorful and spectacular designs, often with a rather looong tail, appeal to adults as well as children. Perhaps the appeal is more to women than men—I know my wife wanted one at one stage! I guess you could put these kites in the Novelty category.

These kinds of kites are a magnet for photographers at kite festivals! I've taken a few such shots myself, at a local festival not far from Adelaide.

A great shot of a homemade 3D sparred dragon was submitted to this site quite early on. The photo ended up with a long string of admiring comments from other site visitors—more so than any other visitor-submitted image!

I believe there are some traditional Chinese kites which are 3D, where a little model of a creature is constructed from fine slivers of bamboo and then covered in silk or paper. A flat kite with straight spars is then attached to the 3D model which allows it to fly. 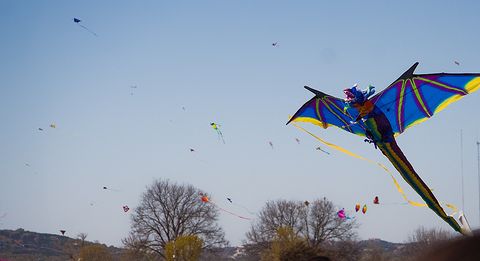 However, the 3D dragon kites available in shops or online these days are quite different. Most of these kites are made with appliquéd nylon sails and fiberglass spars. Dragon designs come and go, but here are a few examples that have come onto the market in the past...

The Shrek 2 3D Dragon kite at the top of this page featured an inflatable body! It was worth about US$60 and supplied with 36 kilogram (80 pound) flying line and a carry case.

Here's another one. The 2-meter (6-foot) Dragon delta kite from New Tech. Like its name suggested, it was actually the familiar delta sail with a dragon body attached underneath for looks! Not only that, but the makers had added a colorful long flat tail, like a pennon kite. Talk about a mixture!

Check out the photo up there, taken at a kite festival in Texas, USA. It features a great-looking 3D dragon kite, with many other festival kites in the background.

These are popular with kids and widely available from shops. The general configuration is a pennon (round top) or delta outline, with a matching long flat tail. The tail is not as narrow as a simple streamer and is decorated to be an integral part of the creature represented. That's right, they are not necessarily dragons as such, although any one of these is still referred to as a dragon kite.

Pennon kites are a type that originated in medieval times. In contrast to 3D and centipede dragons, this kite is quite simple. It's flat, with a curved spar forming the top edge and a straight spar down the middle.

A long, wide tail traces out the kite's flight path in the air. Sometimes, the tail is tapered along its length. There are usually short tassels attached to each end of the curved spar as well. These are mainly for decoration.

The archaic European variety had a parchment sail, and the common cloth materials of the day were used for the tail.

These days, the bamboo spars are most often replaced with flexible fiberglass rods. The sail material is usually ripstop nylon, and sometimes brightly-colored Mylar film is used.

This is a simple and easy single-line kite, perfect for beginners. I might get one for my little boy when he grows up a bit! (In 2022: erm ... I didn't, and he is taller than me now!) Having said that these kites suit beginners, the Pennon-style ones aren't quite as stable as say, a single-line delta or even the traditional diamond-shaped kite.

Flat dragons tend to swirl around in the wind, which is great since it really shows off the tail.

The people who sell these kites do such a great job of describing how they look in the air that I'm going to simply quote a few phrases I've spotted! Here they are:

To give you some idea of the variety in store-bought dragon kites, here are a few names of kites that were available at this writing. They are all in alphabetical order, because I'm an orderly kind of guy: 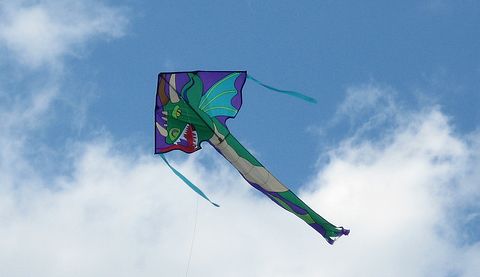 Here's just a tiny bit of history on this type of kite. As I mentioned earlier, they are based on the medieval pennon kite.

Way back in 1405, a book on military technology was written which contained some illustrations. One illustration showed a pennon kite, according to the caption. Enough was known about flying kites at this time that three different bridle arrangements were described, for flying in various wind conditions.

The modern kids' kite in the photo features a relatively short tail. However, the tail is flat and integrates with the rest of the delta-style design. Despite being 2D, a dragon creature is painted on, including the tail. So it really is a "dragon kite"!