Much Copied and Adapted in the West

To really do justice to the entire world of traditional Japanese kites would take a larger website than this one!

Each different region in the country, called a prefecture, tended to come up with its own designs. This all happened during the Edo period from the early 1600s to the mid-1800s. The kites' names often refer to objects, folk heroes, or creatures.

Besides the variety in decoration of kites from Japan, it's amazing how unique they are in terms of overall design. That is, the shape of the frame and sails.

Quaintly, the Japanese refer to the frame as the bones of the kite!

The big majority of them were (and in some cases still are) made from split bamboo for the spars and washi paper for the sails.

Washi might just be paper, but this handmade mulberry-based product is very strong and ideal for kites—as long as you don't get it wet!

I'm just going to focus on a couple of designs which have been much copied or adapted in the West. You are likely to see at least one of these types at any large kite festival around the world!

Apart from these two designs, I wouldn't be surprised if other traditional Japanese kites have been copied too, from time to time.

The shape of the sode dako looks somewhat like a Japanese kimono laid flat. In fact, "sode" means "sleeves of a kimono." 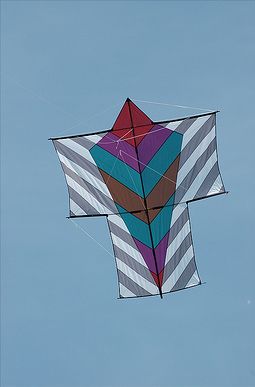 Like some other Japanese kites, and many other Asian designs too, this one lends itself to having a "hummer" strung across the upper horizontal spar. The hummer makes musical noises when aloft in fresh breezes. This feature doesn't seem to have been copied in the West though.

Traditionally, sodes were built and flown to celebrate the birth of a son and to ensure his future happiness and health.

In general, the larger Japanese kites need more complex bridle lines. At the small end of the scale, I've seen a child's paper sode with no bridle at all—just a hole over the vertical spar allowing the flying line to be tied on directly!

Larger sodes would work well with a four-leg bridle, with two lines from each horizontal spar. This helps to relieve the stress at the center of the horizontal spars, in fresh winds.

Most of the biggest sodes seem to have six-leg bridles. That is, lines run from the center and each tip of both horizontal spars. This gives even more rigidity, allowing for the use of even lighter spars than would otherwise be possible. More rigidity also helps the kite to cope with stronger winds. 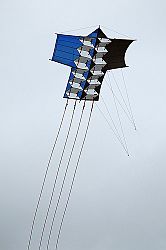 The modern sode in the photo is by Janneke Groen, who is well known for her artistic sode kites. She specializes in appliqué and patchwork techniques. Janneke, who comes from the Netherlands, has been putting her eye-catching flying works of art on show at kite festivals since the 1990s. It was at one of these festivals that Roy Reed took the photo.

Modern Japanese kites like this one usually employ fiberglass or carbon-fiber rods for spars and use ripstop nylon for the sails. The four narrow tails on this particular design help to keep it stable. However, I suspect they are very much a part of the kite's artistic concept!

An interesting addition is the bracing of the upper horizontal spar which I presume is there to improve the flying characteristics of the kite. That's the line going out from the nose to the tips. With a bit of ingenuity, I guess it could be made to double as a pair of hummers! They could be tuned to two different notes perhaps.

Janneke has chosen to go with the full 6-leg bridle, since this is a decent-sized kite. The bridle lines are clearly visible in the photo and the bridle appears to be very long. Usually, with this kind of bridle, the two groups of three lines reduce to just two lines before being connected to the flying line itself.

There's our own homemade MBK Dowel Sode in flight, in the video. 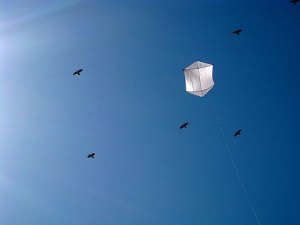 This design is so named because it originated in the region of Sanjo. It's more commonly referred to as the rokkaku. Many non-Japanese abbreviate the name even further to just "rok." The interesting thing about this design is how popular it has become in the West. There's an example of a non-traditional rok in the photo.

The traditional Japanese kites were actually fighters, where people would try to knock each other out of the air by various devious means. Kite battles with the rokkaku are still organized from time to time, all over the world.. In the West, versions of this kite are constructed with more modern materials; when organized battles take place, the rules are different. 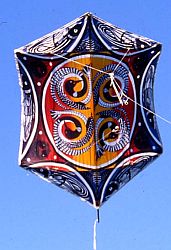 The next step up would be the six-leg bridle as used on the big sodes. In the case of the largest roks flying in fresh wind, an extra line may even be attached to the vertical spar, at the very center.

Some commercially available kites have names—like the one in the picture, the LoonDance. How's that for an elaborate design! This modern rok is screen-printed by hand, which still takes some time, due to the number of colors. Other larger designs by this same company are hand painted, which would add even more hours, not to mention $s!

At about 150 cm (60 in.) tall, this is a medium-sized rok. Thanks to Boreal Kites (of www.gothicdesign.ca) for permission to show that photo.

The materials are not exactly run-of-the-mill. The sail fabric is 3/4 oz. Contender Nylite, which I presume is a specialty nylon cloth, while the spars are spiral-wound epoxy tubing. That sounds exotic! According to the makers, this rok likes winds of around 10 kph (6 mph) but can be adjusted to fly in much stronger breezes.

The photo shows a standard four-leg bridle being used.

There's our own homemade MBK Dowel Rokkaku in flight, in the video.

If you would like a real insight into the world of traditional Japanese kites, perhaps the ultimate experience would be to visit the Kite Museum in Tokyo!

Although there are only three rooms in the museum, they are crammed with approximately 3,000 kites. These cover virtually every region of Japan. Apparently, the aroma of bamboo fills the air in this small but remarkable museum. Mmm, I  can't say my bamboo-skewer spars smell like much, but then they are probably processed to death.

It's possible to buy Japanese kites from the museum. They have small and relatively inexpensive souvenir kites made from bamboo and paper. However, if you have money to burn, you could splash out on something bigger and even more exquisite, made by master craftsmen!