See What You Think of These

OK, so the biggest of the cool kites displayed here might be out of most people's price range. But if you're looking to buy, perhaps something here will edge you in one direction or another as to what type of kite would be pretty cool to own!

On another level, just enjoy these images and my commentary on each of them :-)

There are three sections here: 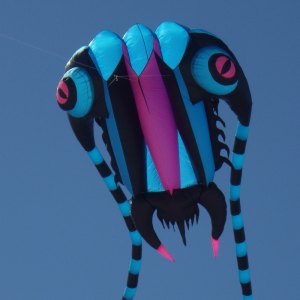 Compared to a kid's diamond, all the trilobyte show kites are pretty huge. This one is mid-sized with several meters between the eyes! 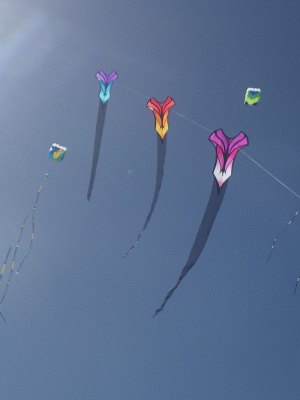 Robert Brasington is known the world over for his art kites. Hailing from Tasmania, the southern-most Australian state, he's a regular at our Adelaide festival. 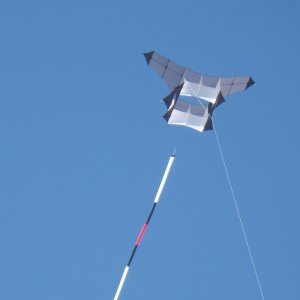 This wonderful Cody box was built to order for a member of our local kite scene here in Adelaide. Box kites don't come much cooler!

Regarding the images in this section, which came from all over the planet ... there was no real point in trying to categorize, so there are 12 of them randomly selected from top to bottom. I found something cool about each one, and you will obviously have your own preferences. 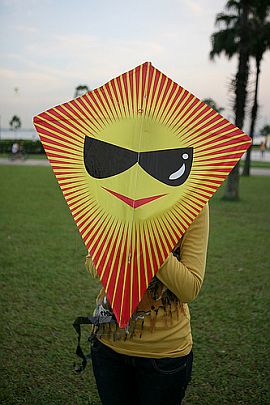 What's the first thing you think of, associated with the word "cool"? Sunglasses, right? So, this snazzy diamond kite just has to be cool! If it's a retail kite, I bet it sells pretty well too. 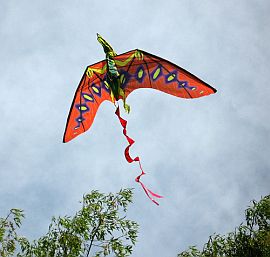 This pretty cool kite is in the same vein as the previous one, except it is based on a real rather than a fictional creature. I thought the limbs really set it off, despite most of the representation just being painted on. Or perhaps it was sewn on! I've read that these kinds of kites can be quite difficult to "get right" in terms of flyability. This one seems to be hanging up there OK. 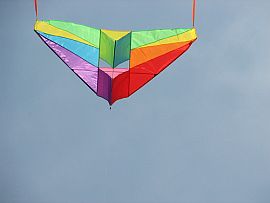 When it comes to box kites, the larger the better. This delta conyne looks good in its livery of warm and cool colors, despite not being a huge kite. I think, since it's hard to tell with nothing else in the picture! What's cool about these kites is that they combine the stability of the box design with lots of extra lifting power from those delta-kite wings. 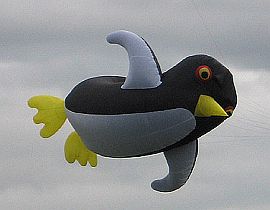 Now, I'm not a huge fan of inflatables. They are cool kites and good crowd-pullers at festivals, but I don't think I would ever find a reason to actually own one. However, having said that, don't you think that this Penguin inflatable is cute and quite adorable! That's despite it being as big as a small elephant. 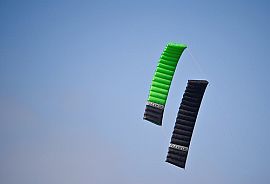 Just looking at the somewhat plain image, you might wonder how these could really be cool kites. But if you were there holding the handles, your breath would be taken away by the sheer speed and power of this set of twin flexifoils! They are cool kites indeed, particularly if you are a stunt-kite enthusiast or any power-kite flyer. 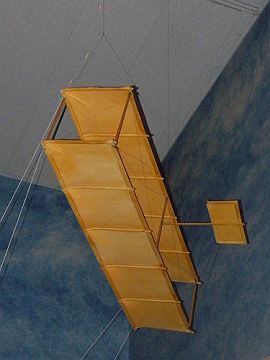 Occasionally, I come across a maker of replica historical kites. These kites are cool because it's like looking way into the past. And that's in full color, not sepia.

This aircraft-like design is a replica of the Wright brothers' kite. Or at least, it's one of the models they made before tackling a full-size one that functioned as a fully controllable glider. 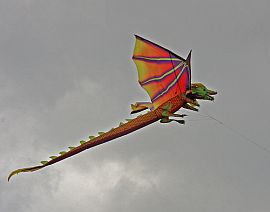 A well-crafted and colored 3D dragon can't fail to get attention! That's particularly so if it is reasonably big and long. I thought this one was pretty cool. As you can imagine, making one of these is quite a project. It would be like doing a painting and making a large model aircraft, all rolled into one! 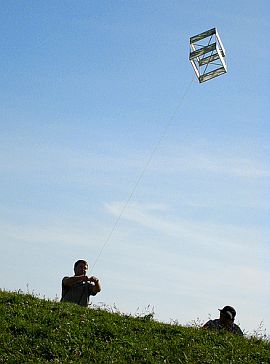 In one sense, this isn't so cool since it's just a fairly ordinary traditional box kite. But I thought the photo was exceptional. It's rare to see a decent shot of both flyer and kite like this. It just makes you want to go out and fly a box kite! And that's cool.

On second thoughts, it's actually a rather neatly constructed and attractive kite, despite being a fairly small traditional box design. 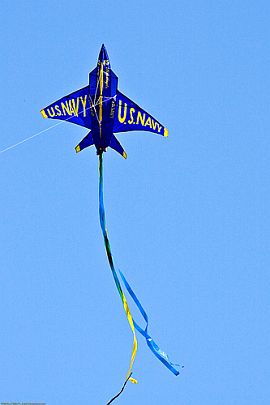 For many kids out there, airplane designs make very cool kites indeed, like this blue Phantom jet. If you can't afford the RC variety, a semi-scale design like this can be a reasonable substitute. Ummm well .... ;-)

Oh, by the way, notice the four-leg bridle. That's unusual on such a small kite. But then again, a jet fighter just wouldn't look right, wiggling and swooping around erratically on a one or two-leg bridle. 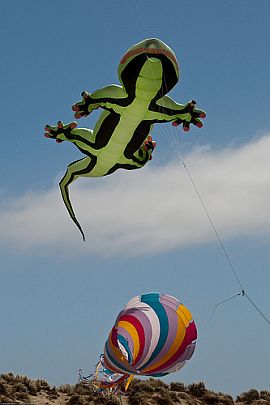 Talking about crowd-pullers, how's this enormous gecko inflatable! They have big bulging eyes on top of the head, which are not visible in this shot.

The gecko just hangs there, swimming with some subtlety in the breeze. The legs and tail move about slowly. Even the toes stay fully inflated as the whole thing rides the wind.

This horrendously expensive but impressive creation is a lot bigger than the penguin, I'm fairly sure. 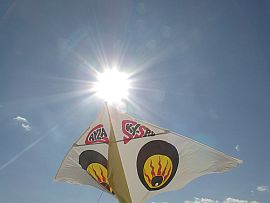 This is a classic delta from an old but well-known kite company.

Who knows how many thousands of kids (and adults!) considered this design cool enough to rush out and buy it! Those eyes can be seen from quite a distance.

You have to wonder what effect the eyes have on various bird species. Would the birds be curious or just scared witless?

I hope you enjoyed this collection of cool kites!