Escape the Tyranny of Chaotic Wind!

There are times you really need an indoor kite! You know the story... "Was hoping to fly today, but just look at that wind—none of my kites will survive in that!" Or perhaps "Gee, I can't even see a leaf moving out there—even my best kite won't stay up in that." 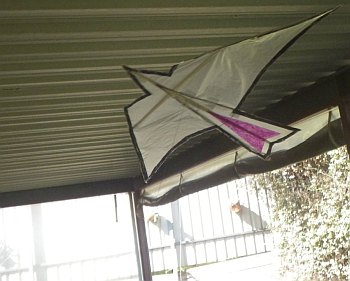 These days, help is at hand in the form of extremely lightweight kites that are specifically designed for flying indoors.

Zero wind kites! From scattered and small beginnings, indoor flying has grown into something of a movement, with entire festivals now being dedicated to the activity. It might never compare in size to more conventional kiting, but flying indoors is definitely here to stay.

In my opinion, you are not restricted to buying special kites made from space-age materials such as polyester sailcloth and tapered graphite spars.

Instead, even the most humble of kite-making materials can be used, as long as the weights are chosen to allow very low-speed flying.

Bridling is particularly important for a home-built indoor kite. A multi-leg arrangement allows you to get away with using much lighter spars than would otherwise be possible. Having said that, I do manage to get away with single-point attachments for my Indoor Series of small kites. That's because it's straightforward to create tapered spars with paper.

But of course, it just boils down to personal choice. Are you a builder or a buyer? Both types come through this website ;-)

Broadly speaking, just three types of kites are flown indoors. Those that fly on one, two or four lines. Miniatures, designs that have less sail area than the palm of your hand, are generally flown indoors for obvious reasons. So I guess these technically belong to the "single-line indoor" category too. OK, so do those somewhat even more rare miniature dual-line stunt kites!

What's Indoor Kite Flying All About?

How can it be summed up? From what I've seen, which includes a number of You-Tube videos :-) it's a relatively short-line form of flying that demands a certain level of finesse. That is, fine judgment of line tension(s) and the kite's reaction to that at any given moment is required.

The best flyers make it look easy, but of course it isn't. It's cool to some, corny to others, but I suspect that it's reasonably cool for most kite flyers.

Flyers create their own "relative wind" by slowly walking backward, walking in large circles, and occasionally pulling on the line(s). With practice, an indoor kite can be flown through all angles around the flyer, including directly overhead—even the single-liners!

So sensitive are these kites to small air movements, that they can actually be affected by someone else walking around nearby.

The overall effect is graceful and artistic—if the pilot is any good, that is!

Here are some notes specific to the number of lines on purpose-built indoor kites:

Single line kites are generally fairly easy and fool-proof to fly. However, putting on a decent display in an indoor setting is another matter! Getting a little routine together would take some practice. That's obvious just by watching.

That's not bad for a single-liner hey?

2-line indoor kites can fly all the usual figures of their outdoor relatives. That's provided the pilot keeps walking backward to give the kite some air pressure. However, tricks as such are more difficult, or impossible, since true trick kites rely on the kite having some inertia. Being almost weightless, an indoor kite just doesn't have enough mass!

All this adds up to a great display, when executed by a good indoor flyer! Of course, flying two-liners such as the Prism 4D indoors takes a little more skill to master than doing the same with single-line kites.

Four-line kites represent the ultimate in maneuverability! I like to call them the "helicopters of the kiting world." These kites, just like their outdoor cousins, can fly forward or backward, loop left or right, and even spin left or right on the axis of the flying line in a controlled way. Not surprisingly, these agile craft are the most difficult of all to master.

The creative possibilities of flying an indoor four-liner, such as the Revolution Indoor, are almost limitless. By the way, that particular indoor kite weighs only 128 g (4.5 oz.). A young expert pilot once impressed the judges of the America's Got Talent show on TV with such a display, set to music. No, he didn't win the whole competition, but it sure introduced a lot of people to zero-wind kite flying in the USA!

There's just one more small point that could be added. Some kites are designed for outdoor use in very light wind. For example, to take advantage of warm rising air like birds do, even if there is no discernible wind at ground level. An example is the ultra-lightweight zero-wind kites from Horvath in Zurich, Switzerland.

My own original MBK Dowel Delta could also qualify, since I distinctly remember trotting around in a large circle one calm day, trying to fly it up a bit higher! This delta has since been redesigned, since it proved a little too light and flimsy for outdoor use.

The point is, both the above kites would be fun to fly indoors, assuming the venue had a reasonably tall ceiling. Anyone can do a few climbs and glides with a lightweight kite!

I hope you enjoyed this short introduction to indoor kite flying. The photo down below shows a couple of huge single-line kites made for indoor flying: 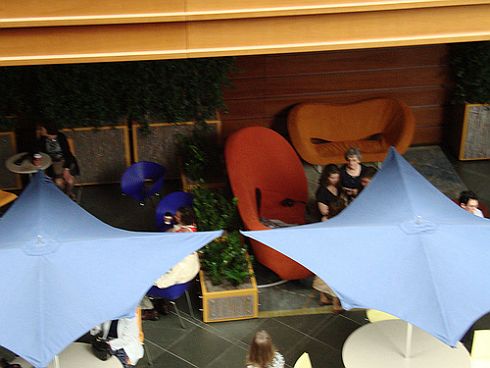