Most of the published info on kite energy generation is either highly technical or is fairly in-depth analysis of the current commercial state of the art. 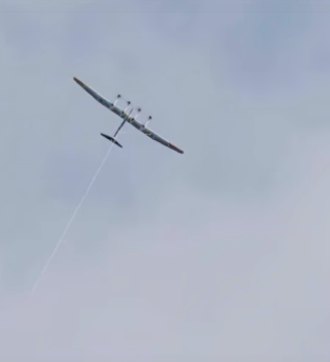 But this is a kite-flyers site so I'm aiming to make this a relatively easy read, just to satisfy your curiosity about what aerial energy generation is all about. Using kites is the most promising approach, although others exist.

Some of the smaller-scale projects use actual recreational kites. But in large-scale commercial projects, all components, including the aerial ones, are developed from scratch. These are purpose-built to maximize efficiency and cost effectiveness. The acronym is AWES—Aerial Wind Energy Systems. Almost all of these systems use kites in one form or another.

I finish off with something of a creative effort to imagine several possibilities for small-scale wind-powered generators. These involve kites of course! As the commercial-energy crowd know well, there's much more and much-more-consistent air movement up high.

Even from a weekend-flyer's perspective, most of us are very familiar with this. You know, the increased tension in the line and smoothness of flight of our bigger kites as we let them up higher than all the surrounding treetops and buildings. In fact, in some conditions, the effect continues to show up noticeably at several multiples of those obstacles' heights.

These are so-called because a kite spins a generator by pulling line off a drum, before the kite is flown back down and the line retracted under low tension to begin the cycle again. Pump and retract, pump and retract. With a two-kite system, one is actively generating power while the other returns to the base station. Then the roles swap over and the cycle starts again. A single kite would be OK for pumping charge into a bank of batteries, but a more continuous output is better for sending power to a grid.

Kite Power Systems is a company that has done a lot of development of this idea. Besides the mechanical aspects of this system, much work had to be done to effectively control the kites. Flying on a single line, bridle settings are altered from a device situated a bridle-length away from the sail. Software has to govern the flying of figure-eights in the "power zone" on the way out and then coordinate the retraction of the line while the kite is configured for low tension. You would have some idea about all this if you fly four-line power kites for aerobatic fun or perhaps landboarding!

Check out this video of a twin-kite pumping system in action:

Makani is one company in particular that has had considerable success in implementing this kite-energy concept. Initially a ground-based system, the ultimate aim is to have an autonomous system which generates continuous power from deep-sea locations far from land. Autonomous simply means the system requires no human intervention for long periods of time.

The basic idea here is that an aircraft-like kite is launched from a fixed base station with a combination of propeller power and the kite-lift familiar to us weekend flyers.

The device hangs vertically from the props as the line is let out, until there is ample height and exposure to higher altitude winds. Then, the device begins a circular flight path much like doing wide loops with a dual-line sport kite. Except the diameter of these loops would be measured in thousands of feet! During this phase, the propellers are "windmilling" and hence are able to spin up the on-board generators. Power can then be fed back along a conductor cable to the base station. The conductor is in the core of the flying line.

If the system decides to stop flying due to insufficient wind, scheduled maintenance, or any other reason, the craft enters a descent phase. Here, the kite hangs from its props as they once again are powered electrically. The craft slowly descends as the line is reeled in until once again it is tucked up next to the ground station. Pretty cool heh? :-)

Here's a video which demonstrates all this:

Interestingly, this company was in the minority developing this kind of system. The supposed major disadvantage of having to fly the weight of generators instead of locating them on the ground was emphatically overcome! So they lost a prototype in the sea—but they'll be back, just like Arnie ;-) And, apart from those spinning props, this kite-energy solution looks so elegant too, with no other mechanical complexity visible when the system is in operation. Just an anchor point, a line with a simple two-point bridle and a kite doing loops in the sky. In principle, no different from a 6-year-old hanging onto a little diamond that needs a bit more tail for the conditions :-)

Going back several decades, an intriguing early idea for kite energy generation was to create a "ladder-mill" or aerial wind turbine. The original project was developed by the Dutch ex-astronaut and physicist Wubbo Ockels.

This involved a series of kites that looked rather like aircraft, connected in a continuous loop. By controlling the angle of attack of the kites, the upwind side of the ladder-mill would climb while the downwind side would descend. By means of a "belt and pulley" arrangement on the ground, the ladder-mill's aerial motion would be mechanically transmitted, via gearing, to an electrical generator.

Like many modern ideas for kite energy, the ladder-mill concept could be implemented in a variety of ways and at vastly different scales. Some researchers were talking about putting these things right up to 30,000 feet! After all, enormous reserves of wind power are to be found up there. Airline pilots are familiar with utilizing tailwinds in excess of 100 kph at those heights, to save fuel. One or several loops might be used, and the kites themselves might be rigid-winged like aircraft or "soft" like most land-based traction kites. At least one small-scale working prototype of the ladder-mill idea has been created, by Dave Santos of kPower, Inc.

This article on green energy generation touches on the ladder-mill experiments.

Ideas for us kite flyers that is! What if you just want to charge your phone rather than keep your state's lights on? Or perhaps light up some kite-mounted LEDs for a spot of night flying? Tiny electrical generators do exist, since they are essentially electric motors being used in reverse fashion. That is, you spin the spindle and a charge appears on the wires. Connect those wires up to some appropriately-designed electronics and a useful charger for small devices can be the result.

The world might not be moving in this direction though, since wireless charging of devices is now on the horizon. That means no need for personal charging devices, potentially! But I digress...

But this is a page on kite energy, and you are a kite flyer. So let's have some fun and imagine a few different ways you could use your kite to spin up a traditional motor-based generator. Like those dynamo generators (DG) that press against a bike tyre to spin up and power the lights:

All this is for a bit of fun and hardly practical for any serious power-generation purpose of course! But I hope you have enjoyed this summary of kite energy and the small-scale flights of fancy :-)