The tetrahedron kite is rather unique in the kiting world, as you will see.

The tetrahedron is a four-sided three-dimensional shape, where each side is a triangle. If you make such a rigid structure from sticks or rods, then cover any two sides with sail material, you have the basic building-block for this type of cellular kite.

The photo shows a configuration using 64 such building blocks, or cells. That kite was made and flown by a pair of UK enthusiasts known as the The Tetrahedron Flyers.

The smallest practical design uses four cells, joined at the corners to form an even bigger tetrahedron. That's only the start of an amazing array of possibilities! 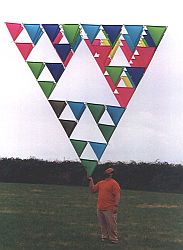 Here's a list where I attempt to summarize the tetrahedron kite, compared to all other kites:

Despite the construction challenges, a small but dedicated band of people around the world enjoy making these kites from a range of modern materials.

It's time to make all this a bit clearer! There is one group of configurations that is quite easy to grasp. Here's the idea, just do it in your head, or glue together some matchsticks if you're really keen! 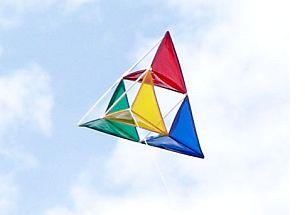 Take three tetrahedrons and lay them on the table so their bases form one big triangle. Got it?

Now, add a fourth tetrahedron on top, so the corners of its base triangle touch the upper points of the first three tetrahedrons. Stand back a bit, and look. Well, it's just one big tetrahedron now! It's just like that colorful tetrahedron kite in the photo.

What if you made four such big tetrahedrons, and plugged them together in exactly the same way. Yep, you've just created a 16-cell structure! And again, standing back a bit further this time, it just looks like one even bigger tetrahedron! Can you see where this is going.

Guess what happens when you make four of these 16-cell things and join them together. The result looks like that awesome creation in the photo at the top of this page! It's a 64-cell tetrahedron kite!

That little "thought experiment" is not a set of instructions for building a kite—far from it. It's just a start to getting your head around the idea of making these kites. 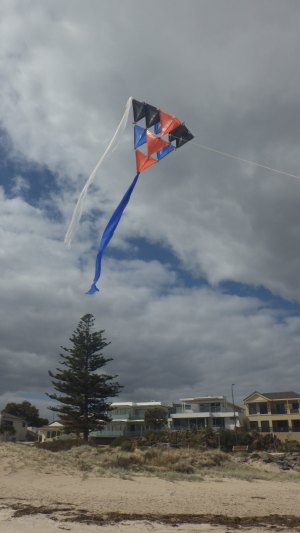 Have you caught the mathematical flavor of all this? Not surprisingly, this kind of cellular kite is used in many educational institutions to illustrate mathematical principles. Like what? Try geometry, measurement, angles, aerodynamics, and some basic physics.

Here's a summary of the tetrahedron kite from single cell to ermmm 256 cells, using the process just described:

That last one would be a hit on YouTube ;-) Particularly if you parked the kite 50 meters (160 feet) up in the air, then guided a powerful R/C model aircraft right through it, creating a cloud of splinters and tissue scraps. It could be very viral, don't you think?

Of course, you don't have to stick to multiples of two for the number of cells along an edge. You can have a three-cell-per-edge building block, as illustrated by my MBK 10-cell Skewer Tetrahedral in the tall photo.

So, from there, you could create a 40-cell biggie or even a 160-cell monster!

What's the kite doing with a tail on one side and not the other? The breeze had picked up and was pushing the kite to the right due to a small inaccuracy in cell alignment. Using a tip tail is a quick fix out in the field!

Would you like to see what a tetrahedral looks like in flight? This is our first MBK Skewer tetra in flight, a simple four cell design. Thanks to the lightness and strength of bamboo, it doesn't require a lot of wind to fly:

Here's another relatively simple and cheap tetrahedron kite—make a 4-cell tetrahedral from straws, cellophane, and a few other bits and pieces! 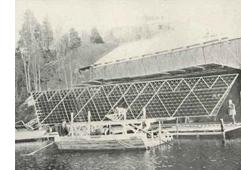 This page can't finish without at least a brief mention of Mr. Bell and his pioneering work with the tetrahedral concept. It was his idea, after all!

In the early 1900s, Bell's kites were part of a progression from large kite, to man-carrying towed glider, to man-carrying powered aircraft. Yes, an engine-powered piloted version actually flew!

The first Bell tetrahedron kite, in 1905, was the Frost King which initially had 256 cells. Later, this was increased to 1300 which was sufficient to carry a man. The next separate design was the Cygnet I, which had no less than 3393 tetrahedral cells, each measuring 25 cm along each of the four spars.

Hey, that's quite close to the spar length of my smallest skewer kites! How about that.

The cells on the Cygnet were arranged like a giant beam—52 x 12 x 12 cells. The overall span was 13 meters (42.5 feet). That's it in the black and white (sepia?) photo, courtesy of the AKA (American Kitefliers Association).

Later development, up to the Cygnet II and III, moved away from the tetrahedron kite and into the world of powered aircraft.