Hanging Lures a Loooong Way Off

A bit of history might be good to begin with. The technique of using fishing kites to drop a baited line into the water originated with the ancient Chinese. 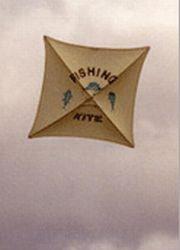 For example, there were the Solomon Islanders. Another example is the inhabitants of Tobi island in the Republic of Palau. All they had was coconut fiber, but they succeeded in turning that material into fishing line! Cobwebs were found to function nicely as lures too, when formed a certain way. Talk about resourceful. Let's not forget the kites themselves. How's this—a large leaf for the sail and palm fronds for spars :-)

Traditional kites for fishing also appear throughout the Malay Peninsula. Early forms of these kites were as simple as a large leaf threaded with strips of fine bamboo, with a hook hung from a long length of line.

This form of fishing is still used in some parts of Asia today.

In more modern times, it seems that a certain Captain Bob Lewis was responsible for making this form of fishing more popular in the West. Bob Lewis was active in the sailfish-rich waters off southern Florida, in the USA.

Another notable location where this sport is popular is New Zealand—the home of Paul's Fishing Kites.

Today, the kites used are mainly simple sleds, diamonds, and deltas that are adjusted to fly low. That makes sense since the idea is to take the fishing line out far away from the angler. For example, this gets across surf and into deeper water where bigger fish can be caught. Kite fishing is also done out of boats, where the odds of catching a fish are increased by flying more than one kite at once. Commercial kite-based systems have been around since the late 80s.

Even from a boat, there can be areas of water that are inaccessible due to shallow depth or hazards like rocks or coral. Apparently, fish love to congregate in some of these locations. If they see a kite overhead, they shouldn't get too comfortable though ;-)

In really light conditions, keen anglers just attach a helium-filled balloon to their kites to keep them in the air! Balloons can also be handy to prevent a kite from sinking deep underwater after contacting the surface during a lull. I can imagine pulling a kite through water would be a real ... drag. Sorry...

The price range seems to be around US$30 to US$150. At the bottom end are small sleds such as the Small Pocket Sled kite from Paul's Fishing Kites. The same company sells the Casting kite in the middle of the price range and their Mega Mouth kite for about US$150.

That's a lot more than for comparable simple recreational kites. But I suppose they have to be very waterproof and also quite strong in case they get dragged through the water. Or perhaps anglers spend so much on other gear that the retailers hope they can get away with offering pricey kites!

Here's a run down on how kites are used for fishing these days:

The advantages of using "casting kites", particularly when using live baits include:

Some well-known kites used by anglers include:

And no doubt there are plenty of DIYers out there too, who like to avoid the expense of buying ready-made gear! Some of these people contact me about it. I usually recommend a simple tailless sled or delta design, made from waterproof materials of course.

One last point—drones are now being used for fishing. But hey, this is a kite site, so I'll zip it right there ;-)