As in the Book and the Movie!

"Kite running," in some cultures, is chasing down a kite after its string has been cut during a bout of kite fighting. The winner of the bout continues flying. 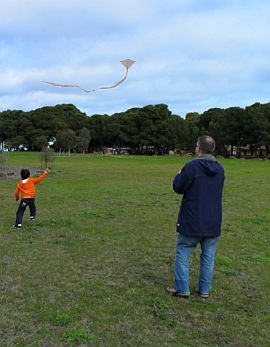 As defined by our own family

A bit of a head-scratch has jogged some memories that lead to other definitions too:

Further down this page I look a bit deeper into the very first definition.

Actually, I'll ignore all those others in the list ;-)

The practice of having someone else chase after your kite is not limited to Afghanistan. That country is probably the most strongly associated with kite fighting and running, due to the very popular book The Kite Runner and the movie that followed.

In fact, Afghanistan has a long and rich kite-fighting history going back centuries. Interestingly, even in the 21st century, the sport in this country remains largely untouched by officialdom and marketing. An exception is the importing of flying line, which has overtaken local traditional production. The old method was to coat cotton string with a paste of glue and crushed glass—all the better to slice one's opponent's flying line with! These days, imported line is nylon.

Pakistan and India also use the term kite running. However, the runners in those countries have a much more urban environment to deal with, as they scramble after tissue and bamboo drifting in defeat.

The fighter kites in these two countries are somewhat smaller than the Afghan ones, which average around 1 meter (3 feet) in width and height. Sometimes, it's the flyer himself who runs after his free-flying kite. Yes, it's a male-dominated activity in these countries.

Kite fighting as such is known in quite a few countries around the world. However, the practice of actually parting other people's lines is biggest by far in western and central Asia. The alternative method is simply to drag down or tip other kites off balance, in order to be the last one flying. There's plenty of this in Japan and the USA.

Some Dangers of Kite Running

I've been talking about scrambling with your eyes on the sky. It's not hard to imagine how dangerous this is, for those who happen to be crossing a busy street at the time! The danger doesn't end when the kite is down either. Runners might find that it's up a tree or jammed in the gutter of a multistory building. Apparently, kite running gets people killed from time to time from accidental falls to the ground while attempting a retrieve.

There is a reward for these death-defying antics; you get to keep the kite! I'm not sure that I would risk my life for a piece of tissue and bamboo, however nicely made and decorated. Oh yes, I nearly forgot... It's not unknown for a motorcyclist to nearly lose his head in these situations. I'm not referring to road rage either! This has actually happened when glass-coated flying line ended up tightly strung across a narrow alley, barely visible to approaching traffic.

On a more positive note, all these free-floating kites present an opportunity for the very poorest people to claim, own, and fly some expertly constructed fighter kites! So there's that, in addition to the emotional highs of success in the kite-running quest.

You better look out, if you have a kite in the sky! ;-) The notion of cutting down other kites is very much ingrained in the minds of many men from some Asian nations. From a very young age, it's just been the thing to do. It's what kites are for, isn't it, the thinking goes.

I've read of string-cutting incidents in other articles. Some guy quickly learns that freeing someone else's kite in that manner is terribly anti-social here in the West.

Even in our local association, I've overheard at least one story. An Asian flyer got a little carried away and even cut one of the strings of a multi-liner 8-|  Oh my goodness (and I hope you liked the goggle-eyed emoticon).

Just to add some balance back into this little spiel, I must say that some of the most joyful and skillful single-line flyers seen at festivals are from the countries just mentioned—in particular, Afghanistan, India, and Pakistan. The enthusiasm doesn't seem related to the size of kite either; I've seen some really tiny fighters darting around on thin thread!

Where did it all start? Many historians believe that kites made their way out of China and down the Southeast Asian peninsula and eventually across into many Pacific islands.

Similarly, the practice of kite running also spread toward the Middle East through India and Pakistan, finally reaching Afghanistan several centuries ago. In all these countries, young and old are equally keen on the sport. While mainly men and boys participate, people from many walks of life can be seen battling it out in the skies with these maneuverable single-string kites. This is particularly true in Afghanistan where the entire spectrum of society can sometimes be observed in action.

Wait a sec... single string? How do you steer these things? I must admit I had heard about kite fighting long before I came across the explanation of just how these kites are controlled.

The kites are actually unstable when there is only light tension in the line. Check out the movies on YouTube, where you can see fighting kites moving slowly in tight circles. To move in a particular direction, you wait until the kite is pointing there. Then you tug the line to load up the kite sail with air pressure, and off it shoots in a straight line... for a few seconds.

Now, about the photo below... They are Afghan kite runners—the real thing! See another couple of lads in the background, scanning the sky for kites as well. 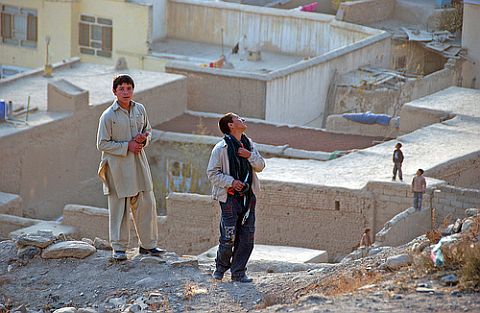