A Ben Franklin Kite to Make

Once in a while, someone in the USA wants to make a replica of the famous Ben Franklin kite. This page is dedicated to helping you do just that! And further down, I've included some extra info and notes on the original scenario those centuries ago.

The instructions here are mainly for getting the "look" right. That is, putting together something that looks very much like the original Franklin design would have—if it was ever built! There's no proof that it actually was.

(By the way, the sticks are behind the sail material. The bridle lines are therefore poked through holes in the sail before being tied to the vertical stick.)

An expert would say "tut tut, the handkerchief isn't real silk, and the string should be hemp twine." And so on. But hey, this Ben Franklin kite is close enough to use as a prop in a play, for example.

A few tips are provided for getting the design as shown to actually fly. Plenty of people have tried and failed. But this is a specialist kite site ;-)

If you simply follow the diagram (further down) as closely as possible, you will certainly end up with a very authentic-looking historical kite—at least from some distance away!

Really, there is a lot of variation in the looks of diamond kites that are capable of flying. Elsewhere on his site, you will find no less than eight different diamond-based designs that I have made and flown.

Now supposing you really need this replica to actually fly successfully. The guys on Myth Busters (a post-millennium US TV show) failed to do it and ended up using a traditional diamond with round wooden doweling. At least they used real silk for the sail, I think!

This short list of points should ensure that your replica flies well. It will give you the best chance possible of success:

Notes on the Original Kite

Most school kids have come across references to the Benjamin Franklin kite used in that electricity experiment. But is anything known about the kite itself? 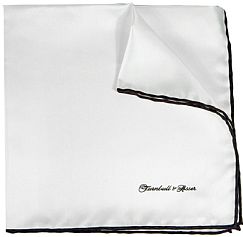 Fortunately for historians, and I use the term very loosely in my case ;-) Mr. Franklin once wrote a letter to a friend, on this topic. Quotes from this letter may be found in many different places, although the text is edited just a little for ease of reading.

Here is a typical quote from the letter, which was written by Ben Franklin to Peter Collinson on October 19, 1752:

"Make a small cross of two light strips of cedar, the arms so long as to reach to the four corners of a large thin silk handkerchief when extended; tie the corners of the handkerchief to the extremities of the cross, so you have the body of a kite; which being properly accommodated with a tail, loop, and string, will rise in the air, like those made of paper; but this being of silk is fitter to bear the wet and wind of a thunder gust without tearing. To the top of the upright stick of the cross is to be fixed a very sharp pointed wire, rising a foot or more above the wood."

Neatly folded up in the photo is a modern large silk handkerchief, plain white as was popular in Franklin's day. 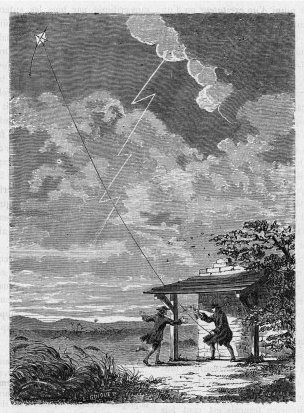 Now, one day I will get my hands on an actual silk handkerchief, not unlike the one near the quote up there.

Together with some cedar wood, I intend to recreate a Ben Franklin kite and post a photo or two of it here, plus some video of the kite flying. (ah sorry guys, it's never going to happen now... T.P. 2022)

At first reading, I thought the "loop" Franklin mentions must be a string around the perimeter of the kite, to which the edges of the handkerchief are to be attached. But since he has already specified to "tie the corners" to the cedar wood tips, it seems more likely that Franklin was referring to a bridle loop tied to the vertical spar.

Attaching the loop is almost the last step before being able to go out and fly the kite.

Flying in those conditions simply isn't safe, and it's not even clear whether Franklin himself actually performed the experiment he proposed. That is, hand flying a kite with a wet string in a thunder storm, complete with key suspended from the hemp line to observe sparks or to feed them to a charge-storage device.

Take a good look at that old artwork up there. Franklin recommended flying the kite from under shelter, such as a verandah or doorway. The artist seems to have noted this. Also, handkerchiefs are generally square in shape, unlike a traditional diamond-kite sail. The artist seems to have got this detail correct too, depicting the Ben Franklin kite as a diamond with a square sail.

However, the artist has erred in depicting a bridle loop going to each end of the horizontal spar. On a perfectly square design like the Benjamin Franklin kite, it just won't fly like that! Instead, the loop should be attached to the vertical spar, with the flying line attached a lot closer to the nose than the tail of the kite.

Images, or rather images of images or sculptures of Franklin abound. Here's quite a special one, admired by many photographers: 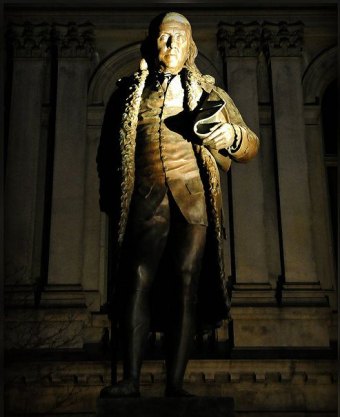 Have I made a Ben Franklin kite myself? Not yet—have you seen the prices on big high-quality silk handkerchiefs?