A Microcosm of the Kiting World

The talented makers of miniature kites come up with some intriguing results! It's a whole world of which many people, perhaps even many kite flyers, are not aware.

Most of us kite flyers think of "real" kites as being at least a meter (3 1/2 feet) across, and flying them high on hundreds of feet of line. Or, perhaps we imagine children's kites being flown down at the beach, darting around in a stiff sea breeze and usually on a rather short string. 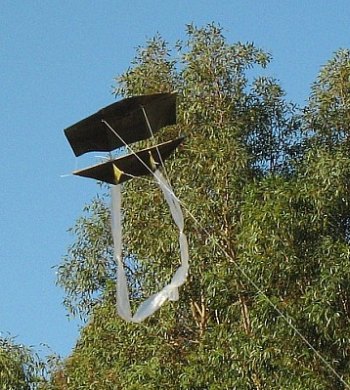 The categories of miniature kites are explained further down this page.

In the USA, and possibly other countries as well, there are even competitions held for making and flying these little masterpieces. A creation isn't a kite if it doesn't fly, so the rules are specific about the definition of a successful flight.

﻿Having done a lot of research on kites generally, I was struck by how the whole "mini kites" scene has so many parallels to the kiting scene in general. For example:

A short time after writing this page, it dawned on me that my own MBK 1-Skewer kites were technically miniatures. That's because, at less than 30 cm (12 in.) across, they fall under the Magnum category. So they're giants of the miniature kite world hehe!

Oh, I haven't actually defined the size of a miniature yet. Here's a list of official sizes. Each name corresponds to a cube where each side has the dimension specified. For example, a Thumb kite must fit inside a cube that is 1.5 in. (38 mm) on each side.

As already mentioned, my own MBK 1-Skewer kites actually fit the Magnum category. Fancy making a Magnum dopero? I can see the original right now, on top of a bookcase. It's a little black-sailed dopero with four bamboo BBQ-skewer spars. However, most competitions exclude any entries larger than Hand size. Oh well, back to the drawing board.

Usually, a successful competition flight involves maintaining a minimum line angle for a minimum length of time. On this scale, an angle of just 20 degrees is sometimes good enough for a qualifying flight. That might be disappointing for a typical store-bought kite, but for the smallest of miniatures, it proves that the kite is definitely flying!

Competitions have categories, such as the following:

Size. Of course! This is where fine craftsmanship and knowledge of materials pay off. And of course a very steady hand!

Originality. Some people just have a knack for this. Cartoonists are supposed to be some of the most creative and original individuals around. I wonder how many of them have found their way into miniature kite-making.

Beauty. The work of some true artists shows up here. However, they don't always produce the best flights, since it's hard to make something pretty and yet feather-light at the same time!

Flight. This would be my focus if I got serious about the hobby! It's all about lightness, weight distribution, balance, and planform. Diamonds and fighters tend to do well in this category. They are also some of the simplest designs!

Those categories enable just about any personality type to have a shot at winning something. What's personality got to do with it? Just think about that for a while.

It's fascinating, looking through photos taken at some of these comps. Besides the more common types of flat kites such as eddys and rokkakus, don't be surprised to see things like a three-celled box kite or a tetrahedral!

Have you assumed, to this point, that contestants roll up to a building somewhere to display and fly their creations? That's not always the case! 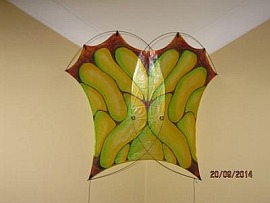 Sometimes a postal event is held, where entries are posted via snail mail to the judging location. It makes sense doesn't it; communication over vast distances is so easy these days, and the kites are so small and light. In most cases, they are very flat too, enabling transit in a "standard letter" so no extra postage is charged.

The Drachen Foundation (a non-profit kiting organization based in Germany) has held a number of worldwide postal competitions for miniature kites. Not surprisingly perhaps, the Japanese featured heavily in the results. They are always the Masters of Small Things it seems! That's not just in size, but also in beauty, reflecting the centuries-old Asian traditions of artistry in kites. The country that produced NASA did better in "flight and originality." Kites reflecting culture, how about that.

An amazing tiny kite made with very modern materials is the Mini-Photon featured in the photo.

Many of the Asian kite-flying cultures have produced very small kites with great success, for centuries. This is particularly true in Japan, where miniaturization of many kinds of objects has a long history.

One of the smallest flyable kites ever made is a Japanese sode, roughly the size of a small fingernail!

In India, tiny fighter kites are made and flown, as a small part of the very popular pastime of flying the larger patang fighters. I saw an enthusiastic flyer with one of these tiny fighter kites at a large kite festival we went to. It had to be the tiniest thing in the air on that day!