Flying along in a kite tube just meters over the water seemed like a lot of fun back in 2006. Water-sport enthusiasts just loved the idea of being towed behind a power boat at speed—and having the option of getting airborne for a while!

Wow. Deep down, most of us have bird envy to a degree, wouldn't you say? Even those who hate flying in aircraft must have had a pleasant flying dream or two at some point in their lives, particularly during childhood. I know I did.

The flying tubes from Wego sold like crazy while they were available. The closest competitor was the aptly-named Manta Ray. It was the big water-sport thing of the year. Heck, the Wego Kite Tube even received the Sports Product of the Year by the Sporting Goods Manufacturers Association! Little did they know.

Oh stop that yawn. Some stats are interesting. Here are some stats which paint a telling picture of the short-lived flying boat-tube craze.

Although there were several similar products, the most notorious was the Wego Kite Tube. It was definitely the star performer in the popular Kite Tubing Fails Compilation video! These details relate to that product: 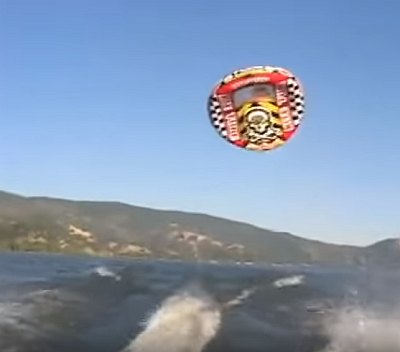 Yes, here are hairy ejections and impacts frozen in time. Most of these people got hurt, although not seriously. For some of these guys (and girls) it was like getting slapped against a rock face.

(Apologies for the poor quality of these images; they were taken on phones in bad weather, then cropped from a video frame! But it's good enough for a laugh, I say.) 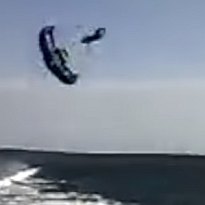 Mate, flapping's not going to help! 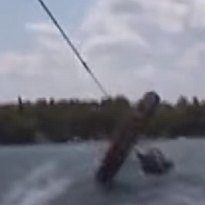 Still trying to hang on... 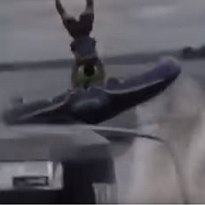 Love doin' hand-stands on my Manta. 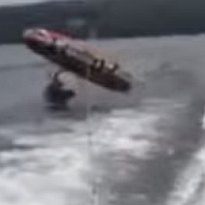 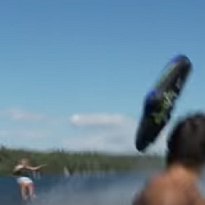 Dude, you landed it! 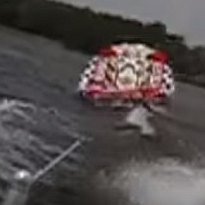 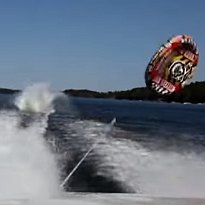 Bombs away! The bigger they are... 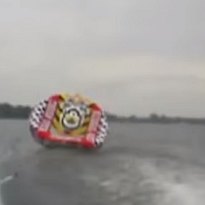 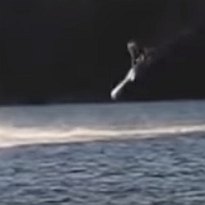 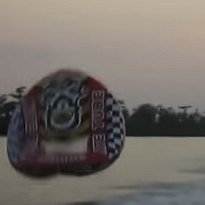 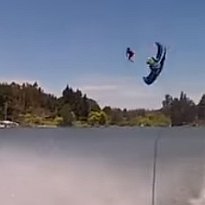 Hey, this is better than the 10-meter board at the pool! 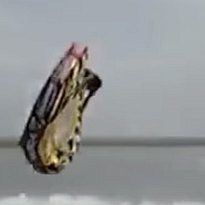 Thoughts as a Kite Designer

While I am not highly qualified in aeronautical engineering, I have made and flown the odd homemade kite. OK, maybe a couple of hundred by now :-)  With all that making, flying, testing, and tweaking of many types of kites over the years, some knowledge has been picked up. So, seeing video footage of these flying boat-tubes in action immediately made me regard these objects as kites. How good were they as kites? Mmmmmmm.

Initial impressions were that kite tubes

Great! Kite clubs would have never been interested, that's for sure ;-)

I took the time to check out a few videos, particularly that very popular compilation :-)  The kite-tube design certainly looked stable enough under controlled conditions. However, problems showed up where there was sudden changes in line tension, causing pitch-overs, or simply too much line tension, which forced the "kite" into directional instability.

It was easy to see how sudden increases in wind speed—gusts in other words—would cause problems. These events would be difficult to pick from down in the boat. A high-mounted anemometer would certain help, if someone was monitoring it closely.

In the videos I even saw evidence of people shifting their weight sideways in desperate attempts to correct (!) problems. Of course, if the timing wasn't good, this was more likely to make things worse! It would be a bit like over-correcting after hanging the back out in a sports car.

Riding the flying boat-tube was probably safe enough with skilled operators in good weather but otherwise was a disaster waiting to happen—IMHO.

The company that recalled the kites I mean flying boat-tubes ;-) must have had lawyers breathing down their necks when they wrote the recall notice. I mean, did they really have "no idea" why there were problems? Yes, they used those exact words. Anyway, it's all over now.

So the kite-tube product was a very poor kite. But it would have been an excellent water-sport product if they had managed to make it much, much safer to operate in windy conditions. Pressure-sensitive vents or something? Better aerodynamics? There would have to be a way.