Airborne Pop-corn Cups and Others

Since I'm about to describe a few different kinds of styrofoam kites, I'm sure you won't mind hearing just a bit about the material itself. 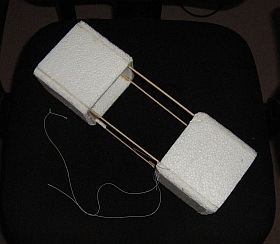 Styrofoam was invented by the Dow Chemical Company in the USA in the  early 1940s. It's BLUE in color and consists of extruded polystyrene in a "closed-cell foam."

Styrofoam is light, resists moisture, resists compression, is a good heat insulator, and is very buoyant in water.

Everybody knows about "styrofoam cups," but this makes the guys at Dow rather cranky!

You see, only the blue stuff is actually STYROFOAM, legally. Notice the capital letters, that's part of their trademark.

The white stuff in cups and packaging materials is actually expanded polystyrene beads. This material has similar properties to STYROFOAM, but is nowhere near as good, according to the Princes of Polystyrene at Dow.

Why don't we just call the cups and everything "foam," they plead.

The foam-slab box kite in the photo flew, but generally I prefer cheap and very light plastic. Combined with hardwood dowel or bamboo spars, the resulting kites are efficient and very good in light winds.

Box kites also work well using these materials, held together with short strips of electrical insulation tape. That's handy for when the winds aren't so light!

Did you know that at least three completely different types of styrofoam kites have been popular at one time or another? I'll mention three types here, some examples of which are probably lying around in people's cupboards or even are still being flown.

There's a guy with an amateurish but oh-so-passionate website who describes how he constructed durable and high-flying kites from styrofoam cups and masking tape. His favorite styrofoam kites, which had a 71cm (28 inch) wingspan, were made from the 32-ounce cups that were sold in the USA. He had two designs actually, which he called the Styrohawk and Stratohawk. Here's a list of interesting facts about these kites:

I might make one myself one day! If it's as good at high-altitude flying as he says, I'm definitely interested. Even though this kite dates back to the mid-90s, it will be a good idea for as long as styrofoam cups are around. Even if styrofoam is eventually changed to some other material, I'd say there's a chance this kite concept will still work!

A tumbling wing can generate lift, and this is the principle used by turbo kites like the one in the small picture down there. It's easy to prove.

Just grab a ruler and hold it in the middle, with your thumb under the bottom edge and two fingers on the top edge. Throw it away from you, giving it a really good flick with your top fingers so it tumbles backward. With practice, you can make a wooden or plastic ruler fly across the room, making a low buzzing sound as it goes!

There, you didn't know I'd describe a party trick on my kite site, did you... I could go into the aerodynamics of this, but won't, because this is a fun kite site!

Like the Styrohawk kite, these turbo kites were also around in the 90s and had two main applications. That is, as kids' toys and later as duck lures for hunters. Yep, they worked brilliantly for duck hunters, attracting the birds into range! As long as there was some wind that is, which was a problem for the duck hunters sometimes.

These styrofoam kites, being rather fragile, didn't remain popular for long in either application. There might be a few still flying, but more modern materials are now being used to construct spinning kites.

Again in the USA, the giant chain store Walmart used to sell big styrofoam kites in the shape of eagles and other large birds. A passing fad, not many people are flying them now it seems.

Other Kites From Styrofoam

OK, OK, I know I said three types of styrofoam kites, but an extra one just came to mind. And some extra info just came my way via an email from another enthusiast. Real STYROFOAM insulation tiles can be used for these kites. Maybe at some later time I will provide detailed instructions for these. But for now, if you are the experimenting type, read on!

Somebody had the idea of constructing a square box kite using styrofoam tiles for the sails and light wooden doweling for the spars. With the tiles butt-joined together, there is no need for the usual bracing with cross sticks. It's just a simple box kite, but apparently the idea works. I can imagine it would need a decent breeze to fly though.

An even simpler concept is to make a triangular box kite from foam tiles. With the edges beveled at the right angles, you can tape or tie three rectangular shapes together, forming a triangular tube. Run a bridle string through it, secure it so it can't slip forward or back and tie a small loop to attach the flying line. I haven't tried it yet myself, but the concept sounds promising!

Apparently, the tetrahedral kite idea can work as well. This involves cutting out four triangular sheets of styrofoam. After some beveling, they should fit reasonably neatly into a tetrahedron shape, like those old flavored-milk cartons. Are you old enough to remember them? ;-)

Finally, here's an idea which doesn't involve tiles but foam coffee-cups and straws. Use your imagination to cut up and tape together some of these cups to form a simple sled kite! Use straws for the two vertical spars. After some experimentation, you might even be able to do away with the straws.