From Around the World!

A star kite is something interesting and different, in comparison to the most common single-surface retail kites you might see flying down at the beach or at a festival. I was surprised to find how various cultures around the world have produced such a variety of approaches to this type of kite. It seems just about every basic aspect of the concept has been done differently! For example: 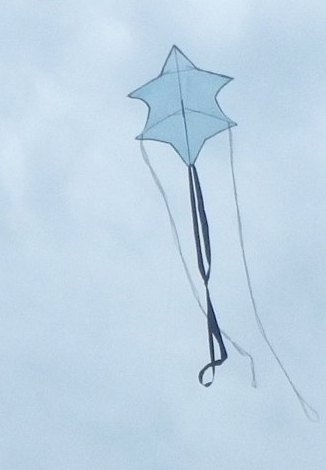 Although this page focuses on single-surface kites, you might be aware of those cellular stars or star box-kites as they are also known. There's a number of retail kites of this type available, so I'll probably do a page on this subtopic one day. 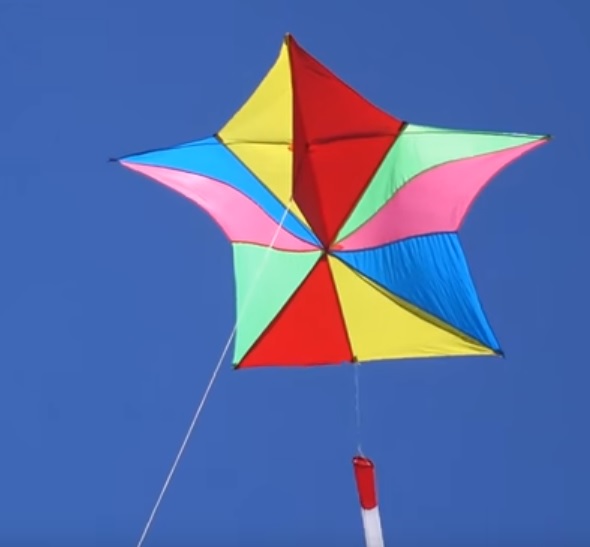 Leading the pack in making the star idea known among many Western kite-flyers would have to be this good-sized retail star kite from China.

The span is 175 cm and it's 150 cm from nose to tail. See the photo. As you can see, it's a typical colorful and sturdy ripstop nylon craft. Judging by the price, the spars would have to be fiberglass rods and/or tubes. Good and strong!

This kite is no fighter, having a delta-like keel and a short pair of spars near the nose with a dihedral fitting. The star does have a long curved rod going from side-tip to side-tip, like most fighters.

Apparently the Star has a great wind range, particularly with some tail added. I've seen footage of the kite flying smoothly while a nearby delta-conyne box is shifting nervously around in very fresh wind!

The five points make a lot of sense for a large stable single-liner. One point is like the head of a bird kite, plus one each side for wingtips plus two at the rear making a kind of fan tail. How's that for a bunch of bird kite analogies :-) 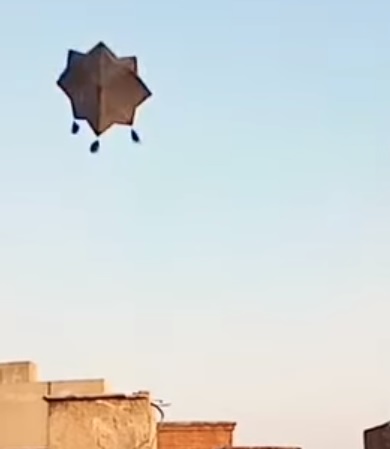 If I'm wrong, correct me, someone who has seen the video ;-)  But it sure looked like the light browns of rooftops and terrain of that country.

Wow, there were no less than eight points on this one! They were all evenly spaced around, plus a tassel hung off each of the lowest three points. The tassels gave some stability but not overly much. This star kite was definitely a fighter, complete with bowed cross-spar.

Interestingly, the clip showed the boy flying the kite right down between buildings and up into clear air again! I must say I have very little experience flying at negative line angles :-) You'd have to get line in pretty quick at times, I would imagine.

The bamboo used in construction appeared to be flat strips, in contrast to round or square rods more commonly used in kite making. The strips lent themselves to being glued in place before the tips and center were secured with sticky gold-colored patches.

Like the Indian kite, this one also made use of battens. That is, spars that are attached to the sail but not rigidly attached to other spars.

The video ended with no bridle detail (unless I just missed it) but I assume a two-leg bridle would be employed on this fighter. In fact you can see the kite flexing about the spine as the boy flyer applies tension.

Kite-making videos from India get large domestic audiences I suspect. That's judging from one I saw which had a six-figure number of views and barely a word of English on the soundtrack.

The kite in this case was not your usual evenly-distributed points around a circle. Instead, the seven-pointed design had differently shaped points toward the rear. It was, however, symmetrical about the vertical axis, like the vast majority of kites everywhere.

At the risk of getting slightly off-topic, I might mention here that there do exist a few artistic types that delight in making ... asymmetric kites! By means of design and bridle adjustments, these kites can fly quite stable—with what kind of wind range, you would have to wonder. Anyway, back to stars.

A few details now about the Indian star kite just mentioned. As is typical in southern Asia, the materials were paper and split bamboo. However, the paper was newspaper! To get rigidity into the sail, fout battens were used plus a highly curved cross spar that extended far down each side of the sail. And of course there was a vertical spine, to which was attached the common Indian two-leg bridle.

Also from India, it would appear, another video featured someone making a quite simple four-pointed star kite. The points were quite long in comparison to other stars. A little bamboo cross-piece was at the center, to which were attached the four short bamboo spars. That's different. I have no doubt the kite flew adequately well, but I can't imagine it out-performing any of the other kites mentioned on this page.

Of course I had to make an MBK version :-)  A rather quick-n-dirty concept kite was slapped together from bamboo skewers, plastic sheet, and sticky tape. After some fiddling, the kite flew successfully. You've already seen it at the top of this page.

Plenty of craft-ready bamboo skewers were sitting in bags of 100 out in the shed. You can buy these online in bulk! Otherwise, if you don't mind snipping off the points, you can buy bags of skewers from supermarkets. I find the ideal dimensions for kite making are 30 cm (12 in.) long x 2.5 mm (1/8 in.) diameter. For smaller kites, the skewers are a very handy spar material.

With a little star-kite experience under my belt I decided to make an improved version and show you the steps.

The video below shows the last prototype of the MBK Skewer Star in action, in a gusty gentle-strength breeze: