Perhaps you have heard of kite fighting, particularly in the context of Indian or Afghan flying. The latter was given a big publicity boost by the movie "The Kite Runner" of course!

As I have touched on in other pages on this site, some traditional Asian contests involve the cutting of your opponent's string with gulp ... ground glass pasted onto the line!

But what about North America? Well, the sport has taken off there too. At first, it was mainly people copying the traditional types of fighting contests from Asia. However, a uniquely American kite-fighting scene has developed since the late 1990s. The photo down there is courtesy of the AKA (American Kitefliers Association). 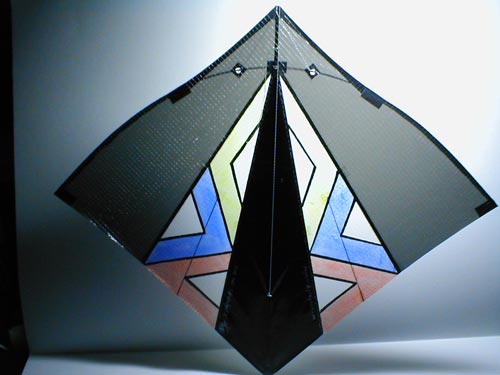 To sum up, here are some of the differences:

Instability is the key to controlling these kites, so they don't have tails. Pulling on some line tension causes the kite to fly in a straight line. At other times, it tends to fly around in tight circles!

Kite-fighting types like to think that their sport extends the flying to three dimensions. Well, I guess that's true when compared to sport kites.

However, I happen to think that thermaling with single-liners is a genuinely 3D affair too! With, for example, a big light-wind rokkaku. At times you have no option but to pull down the kite almost to within arm's reach, before catching another gust, another patch of warm air, right back up to 400 feet.

Oops, this is getting off-topic here ;-) Back to North American fighters...

Other traditional kite types are also the basis for inspiration. For example the Japanese rokkaku. The American versions tend to be smaller and use modern materials. Speaking of materials, here's a fairly comprehensive list of what can be used to create a modern fighter kite:

These kites are not really beginners projects, in the sense that they tend to use a variety of tools and techniques. Several hours of careful work is required to turn out a neatly and accurately made craft. Some designs make an attempt to simplify things for the beginner though, with a claimed build time of just two hours or so.

It's certainly true that the smaller the kite, the harder it is to get the dimensions accurate enough. Not being a great craftsman, that's one reason why I prefer big kites!

Of course there are online games now which simulate kite fighting! This is just like practically every other sport on the planet.

KiteFights are a crowd that take their simulations fairly seriously :-)

Kite Fighting in a Line-Touch Bout

The increasingly popular "line touch" form of competition is a real contrast to the traditional line-cutting scenario. For one thing, all the action happens on relatively short lines. Compare this to the kids in India or Afghanistan who fly their kites so high and far away that they are almost dots in the sky! Thousands of feet of line go out.

In line-touch kite fighting, two competitors stand in two circles on the ground. When the call "bottom" or "top" is made, each flyer attempts to touch his or her flying line with the other person's line. Supposing "top" was called. In that case, the owner of the top line during the next touching of lines wins a point.

The aim, of course, is to gain more points than your opponent. It's safer than lopping off birds' wings and people's ears with glass-coated line. OK, that's a slight exaggeration, but the wax-coated cotton lines these line-touch guys (and girls) use is definitely safer!

What better place to go than the North American Fighter Kite Association if you want more info on the kite-fighting scene there. That's their official site.

Here's a typical fighter kite, which ended up in a tree. Perhaps this kite flew more like an ordinary single-liner though; see how much tail the owner had added! 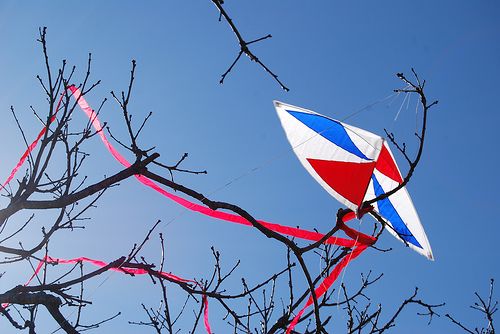 The video below shows a complete kite-fighting bout which took place at the Adelaide International Kite Festival. OK, so it's not North America. However, I'm sure a number of similar rok battles would take place in various events and festivals across the USA each year. At least the video shows some real non-traditional Western kite-fighting. Even if the rokkakus are painted with Japanese characters.