Kids and adults are both welcome to use this kite coloring-page! So it's a little different to your usual kiddie line art of cartoon kites or outdoor kite-flying scenes. But I hope there's enough here for an hour or three of leisurely graphic design with pencils or felt-tipped pens in hand.

What I have done is to fairly accurately reproduce my Indoor Series kite designs as color-in line art.

All this gives some scope for dressing up the various designs. The text provides a little finer detail for adults or bigger kids to fill in.

Here they are, the eight designs of the MBK Indoor Series. Print one off now and get busy making it look amazing! 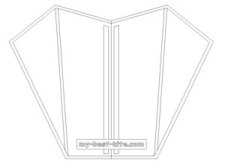 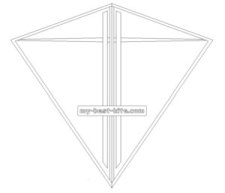 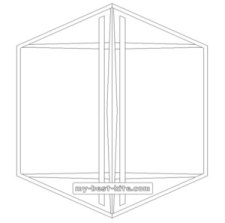 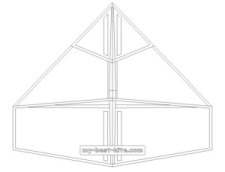 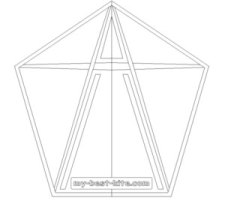 More Than a Kite Coloring Page!

Although you probably came here to find a kite coloring page, I've also included links to the how-to page for each design. This means, if you wanted to, you could create an actual flying craft from paper, sticky tape, and bag plastic! You could use your very own color scheme of course.

To avoid adding unnecessary weight, you can use colored paper for the spars.

On thread, these small kites will brush the ceiling and follow you around the house :-)

Here are the links to illustrated, step-by-step instructions:

And here are a couple of sample flight reports from occasions when I test-flew these kites. As you will find, the designs are not the type that "sort of" fly as little Johnny charges around the lawn :-)  They are real kites.

Yep, this morning I made it into the indoor-kite-flying arena of the local shopping center ;-) ...

As expected, due to the timing, very few people were around. A guy followed me in but then headed in a different direction. While setting up the camera, a school kid walked past. And then, during the single 3-minute flight, another school kid walked through—taking little notice of the old guy flying a kite :-)

The whole exercise went pretty much as planned. First, the camera on a mini-tripod was set in place on a bench seat. The camera was aimed up slightly to catch the kite as it approached. On pressing the shutter, a 1-minute interval started to count down as I launched the kite and began walking in a circuit. After that, a frame was taken every 10 seconds, so one or two shots would occur as I turned and approached on each lap.

The location had a much higher ceiling than elsewhere in the walkways of the building. The floor area was perhaps 12 x 15 paces or so. With about 4 meters (15 feet) of polyester thread out, the kite flew well but got nowhere near the ceiling. I didn't want to leave the kite too far from the camera for a clear image.

Also, as partly expected, there were winds aloft ;-) In one direction, the air conditioning would catch the kite and boost it up to a good 45-degree angle as I walked along slowly.

After the final image was taken, it was straightforward to slip the kite into its cardboard carry-case and wind the thread around the case before exiting the building.

The free online instructions for making the kite were about to be published.

With the step-by-step content finished, all that remained was to take a plan-form shot of the little delta lying on the table. Also, an in-flight shot was needed, to go at the bottom of the instructions.

Apart from the addition of decoration with permanent-color markers, this kite was almost identical in construction to the previous prototype. The previous kite had established that the design met all the in-flight requirements, such as maximum towing speed and sufficient time in the air over a short course.

First, curiosity demanded that I just fly the thing around the house for a bit :-) Thankfully, all seemed in order, the kite being very well behaved on just over a meter of thread. With very little encouragement, the nose of the kite contacted the ceiling a couple of times. So it had no trouble climbing!

Another nice characteristic was that the kite could be put into a controlled glide by maintaining just a hint of tension in the thread. There was a particularly satisfying moment when I managed to guide such a glide from our living room and into the short corridor. From near the ceiling, the feather-light delta descended slowly, just squeaking under the arch which connected the two areas.

Next, it was out to the veranda to snap some in-flight photos. A subtle breeze was wafting through, which made things tricky. Dead-calm air is the best for indoor kites! In addition, the sky was overcast. This really lowered the margin for error in getting a decent sharp shot from the camera. After three sessions out there, taking seven or eight photos each time, I finally had a suitable image that could be cropped down to grace the How To... page on the website.

Whether miniature or maxi, deltas are great at illustrating the magic of flight!