How to Make an Indoor Bird Kite

On this page are a number of easy steps showing you how to make an indoor bird kite from readily available materials. 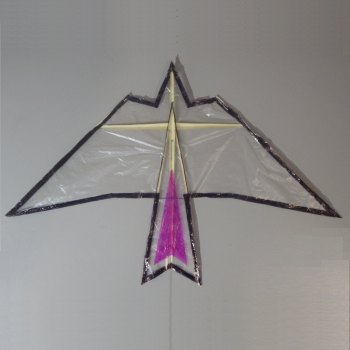 The only materials required for this design are

The tools required, if you can call them that, are

Note: In the photos below, yellow lines have been added to make clear where the edges of sticky tape are. 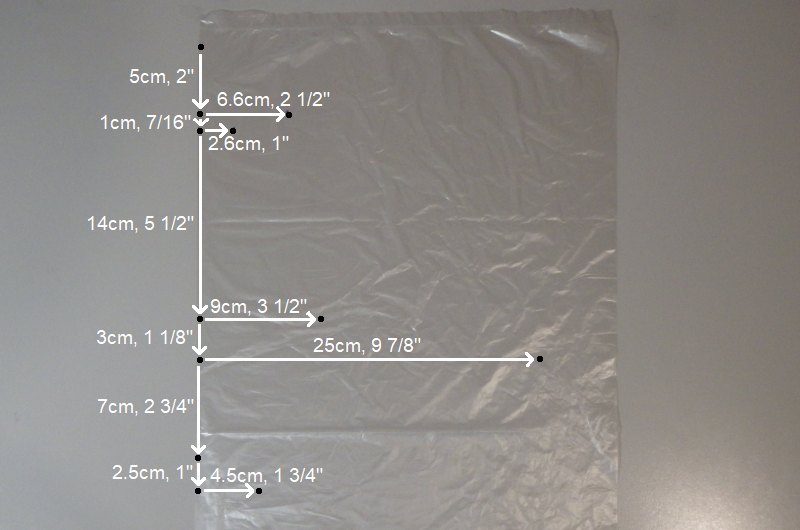 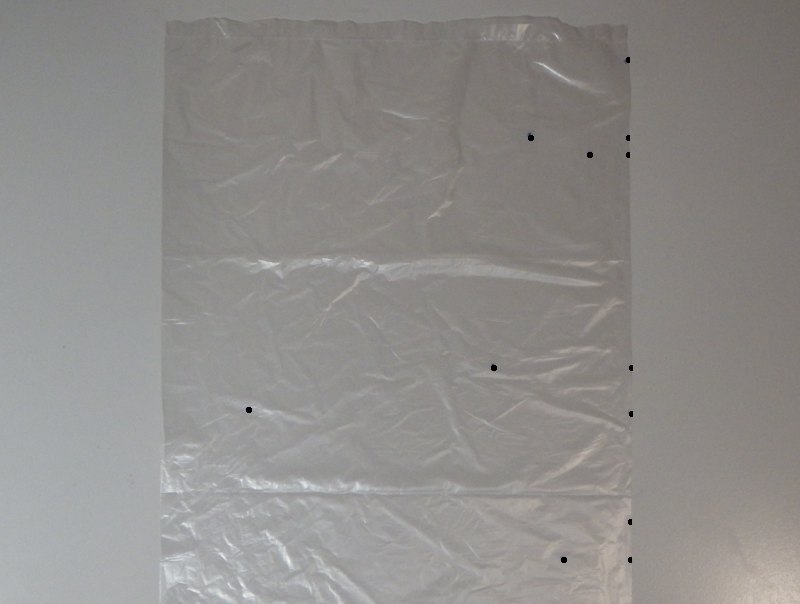 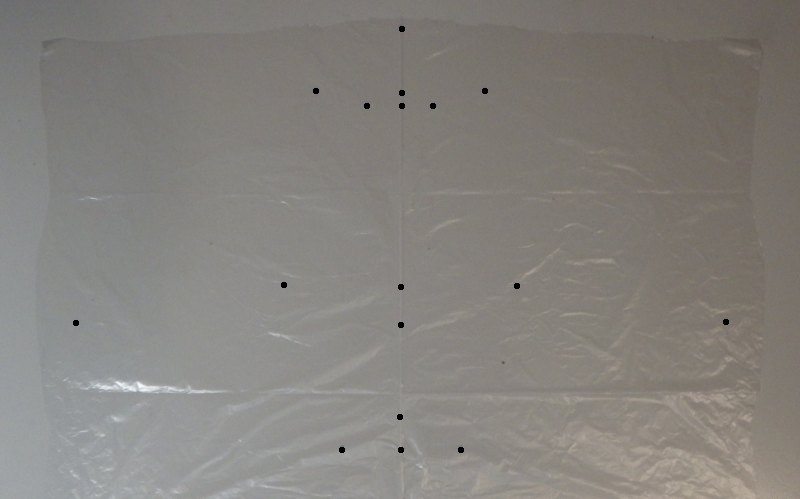 Bag cut and opened out 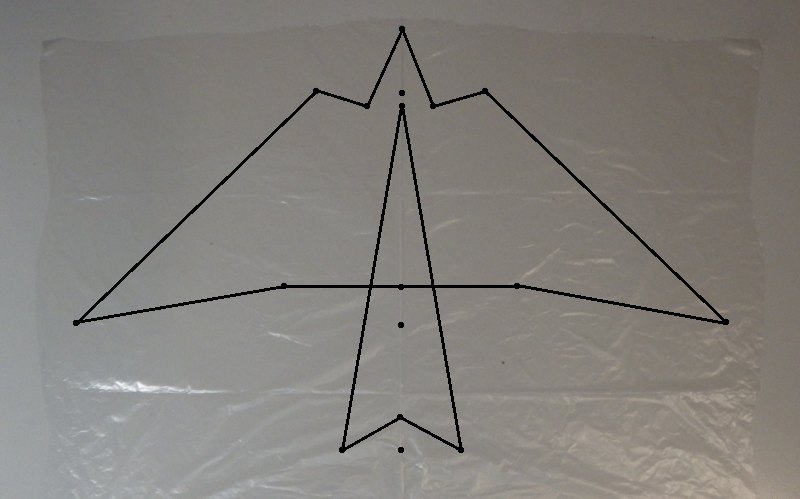 Do you have permanent colored markers? It's time to take them out. 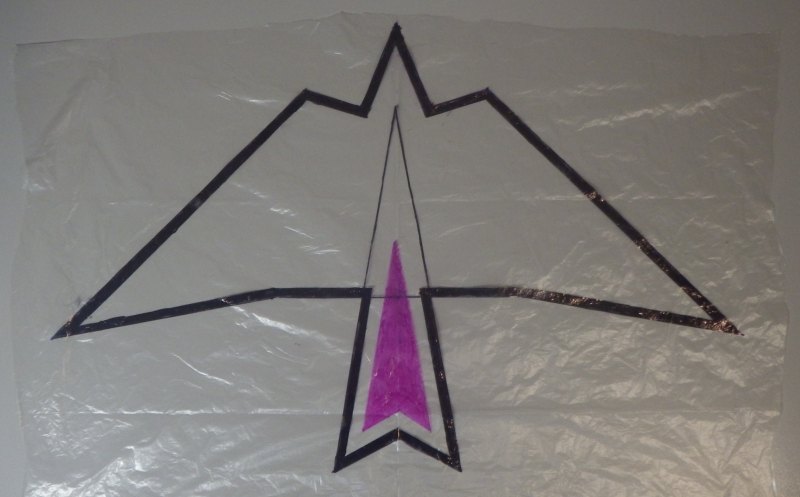 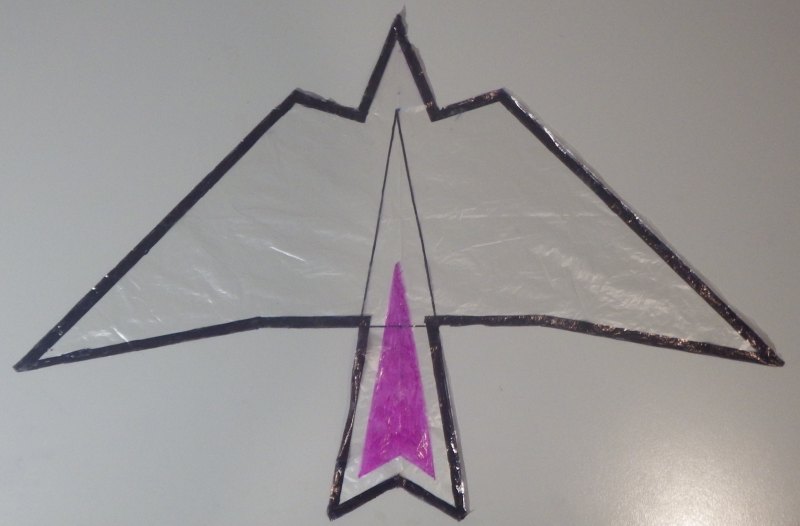 Note: Each white line—even if it is so short it looks like a dot—has a corresponding measurement nearby.

Laminate and Cut Out

Tape laid down over shapes

Tape laid down over shapes, reverse side

Note: It might help to place the paper up against a well-lit window, to trace the corners. Another way is to poke holes through the paper with a pin, at all the corners. Then you can see where all the shapes are.

At this point, you're about halfway through learning how to make an indoor bird kite! The hardest bits have been done already, I'd say. 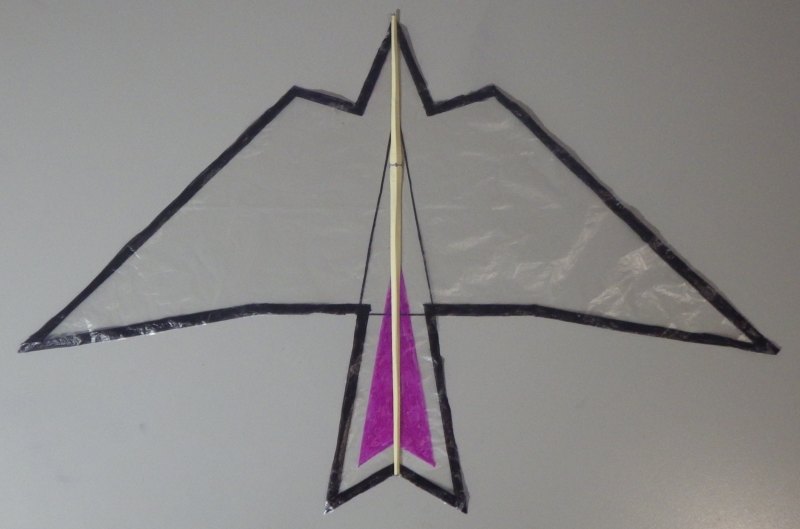 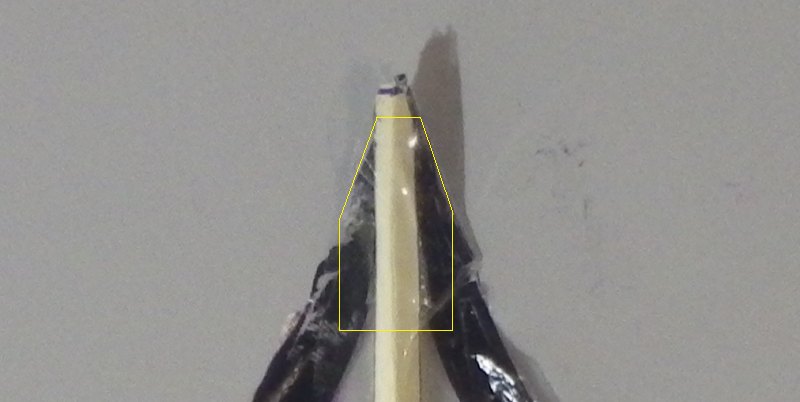 Spar taped on, at nose end

Note: If tape corners stick to the tabletop, gently scrape away with a fingernail or sharp edge. 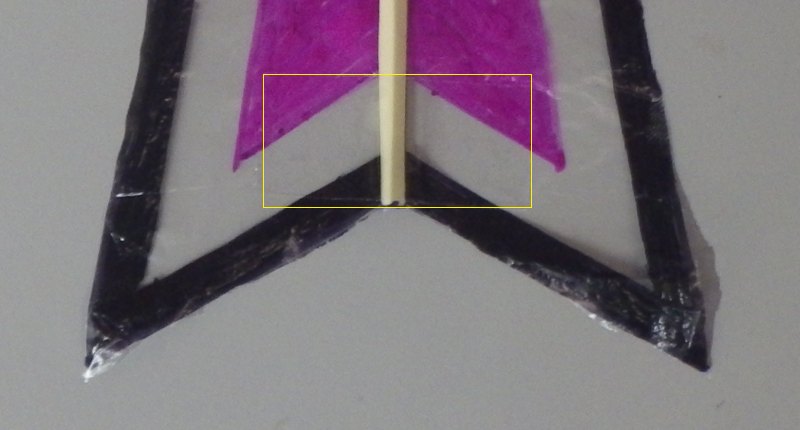 Spar taped on, at tail end 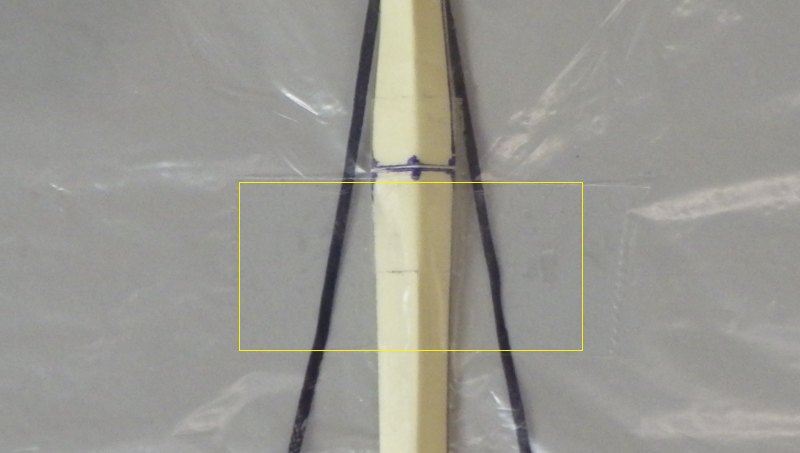 Both leading edge spars taped down

One end of spreader attached

Note: The perspective of the camera makes the dot on the spreader look off-center. It isn't :-)

Both ends of spreader attached 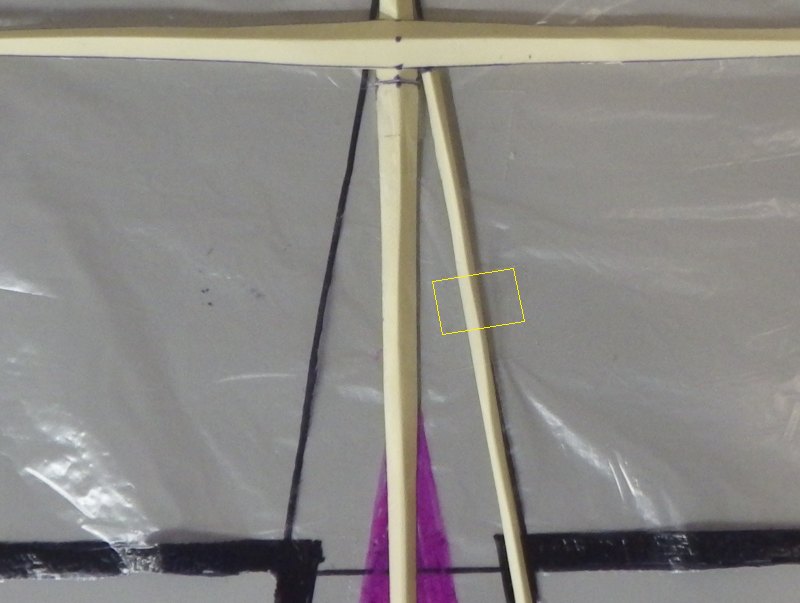 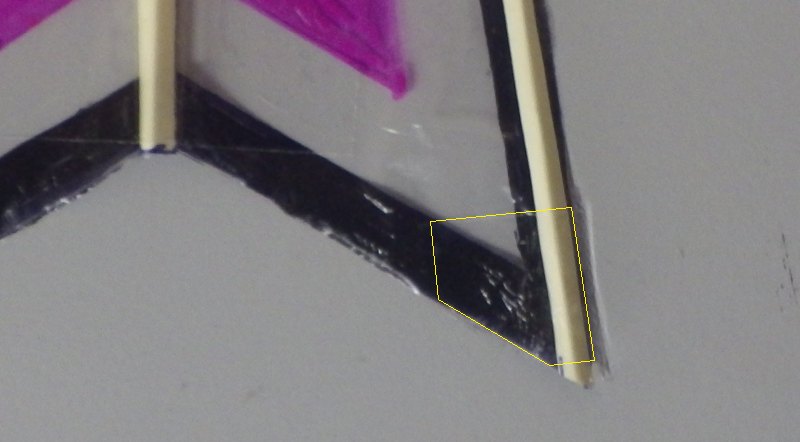 Batten attached at tip of tail 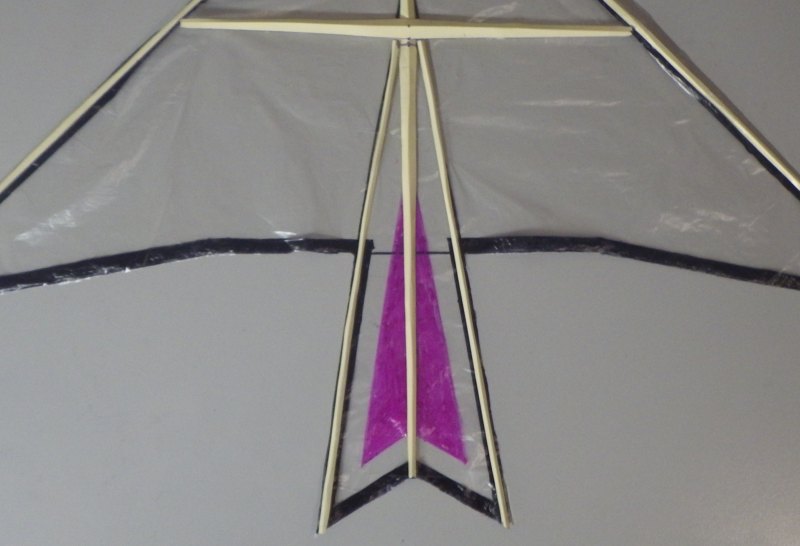 Both battens taped in place

You have pretty much finished learning how to make an indoor bird kite at this point! 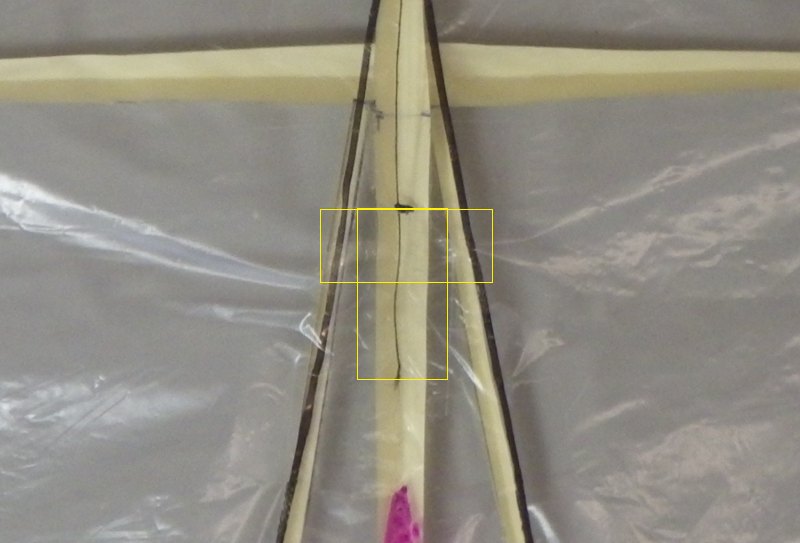 Thread laid down and taped 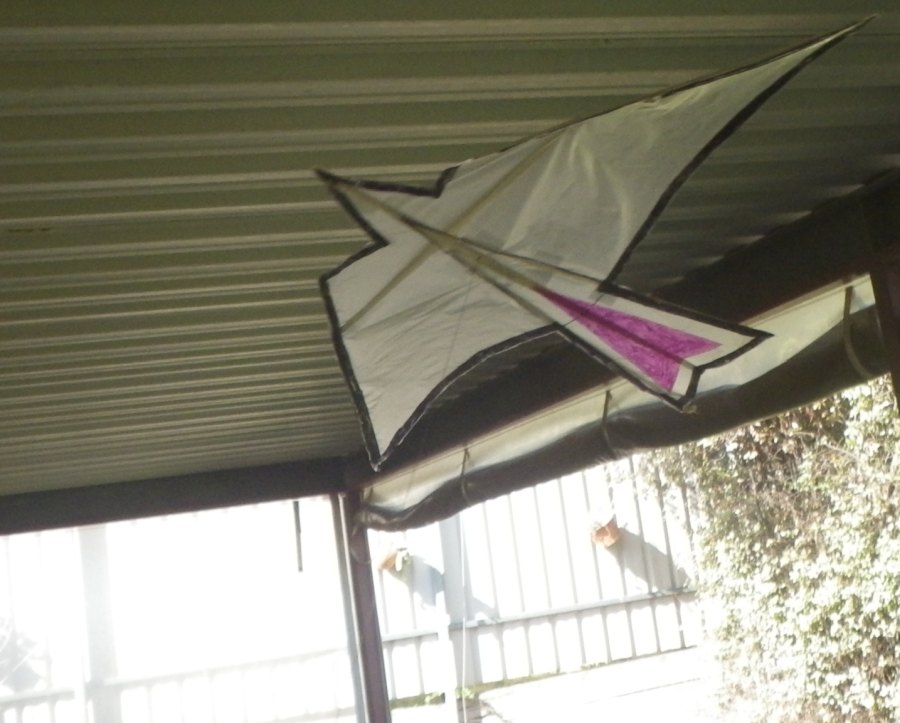 This is a very low-speed kite and it will effortlessly float up at walking pace. Be careful not to jerk the thread or pull too quickly, since this will promptly fold up at least one of the spars!

If a spar does fold up, don't despair. Just carefully pinch the paper where it failed, to get it back into that V-shape section once again. Then try again, going a little slower or smoother this time.

This is how I like to launch, on a length of thread equal to your shoulder height:

If you have the space, try letting out more thread and adjusting your speed until the kite cruises along just short of the ceiling. Look out for light fittings and so on. Look where you're going too, from time to time ;-)

If you need even more line length, just tie on more thread and wind it onto a small square of cardboard.

I hope you have enjoyed learning how to make an indoor bird kite this way.