A large octopus kite used to be one of the first things you saw when approaching a big kite festival. Beside being at a considerable height of course, those writhing tentacles would instantly catch your attention. These days the show octopus has competition in the form of several other designs in large sizes like the ray, cuttlefish, or trilobyte kites.

Right down at the other end of the size spectrum comes the kiddie octopus. This is just one of the incredible plethora of simple flat or 3D kids kites on offer through online channels. You know the ones: do "rivers and bays" provide a clue? ;-)

And, in between, there are numerous mid-sized parafoil-style kites that are suitable for older kids and adults to enjoy down at the beach. 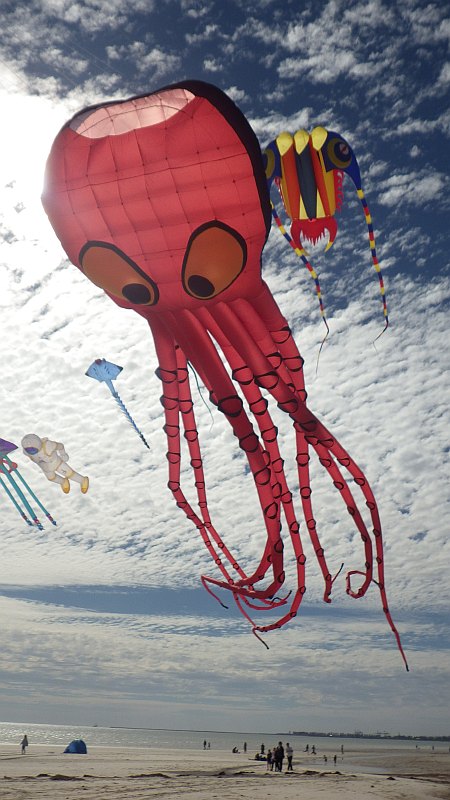 In the early days, an octopus kite was basically a keelless flat parafoil with tube tails. Sizes grew larger and larger as designers realized they had a great crowd-puller on their hands!

One group of enthusiasts in the USA went a step further and multiplied up the wow factor ... by creating the Octopile :-) This was a display of many such kites, arranged close together for a great visual effect.

Eventually, another group of enthusiasts went totally overboard and successfully created and flew a 200-foot-long design. This massive octopus featured in a video that went viral in 2016. The mesmerizing beast hovered and swam over the Marina Barrage in Singapore, with video shot from behind. That angle really made a feature of those incredible snaking tails, of course!

I've flown a kite at the Barrage myself, and it's a very popular spot for this type of activity. The breeze down low can be chaotic, as it spills over the vertical sides of the concrete structure. That is, until you can get your kite away and up a bit higher over the grass.

Even some of the biggest octopus show kites these days have a relatively simple structure.

The head tends to be oval-shaped—a 3D ellipsoid, I suppose you could call it. Bridle lines enter through the lower surface and terminate at the upper surface. So, internal ribs are done away with, along with those thousands of stitches that used to be necessary to secure the ribs.

Instead of several cells open at the front, some modern octopus kites have a single fairly large opening right at the nose. It's big enough to keep the whole creature pumped up even when the breeze strength is modest.

Being large and slow moving, it's not hard to get great photos of these kites when the sun and wind direction co-operate.  It's particularly pleasing when you can get the sun right behind the head, causing a brilliant halo effect.

On one of our club fly-days we saw a mid-sized octopus kite, flying from the line of a large parafoil lifter. But with correct bridle adjustment and smooth air, these octopi can fly just fine on their own. On this occasion, I think the owners just liked the look of the two dark-colored kites in the air together! 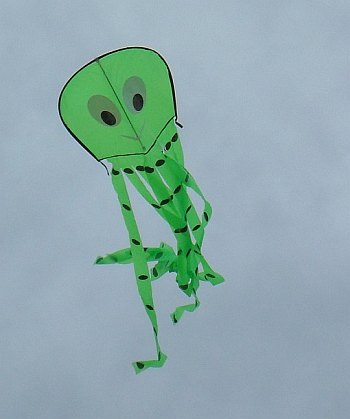 It's a fact that almost any flat shape will fly as a kite if light enough and bridled correctly. A bit of bow horizontally and/or a length of tail is usually necessary to keep the craft stable. And so the kiddie octopus was born.

Someone, somewhere, decided to exploit the popularity of the octopus kite and create a simple and much smaller flat version. It would have been a piece of cake really, with no less than eight long tails to keep the thing steady! With a bit of experimentation with tail area and length, the head would not need much bow or dihedral.

There's a flat-style kite in the photo, which we spotted at the annual festival one year. See how the line tension is pulling some dihedral into the sail near the tail end. That's great for stability!

The structure of this kite is inspired by the quite old concept of the pennant kite. This type of kite had a curved outside edge and a rod running down the middle, both of which are easy to spot in the photo. The sail was a long ribbon (or "pennant") which continued down from the head part and came to a point at the end.

For the octopus, the sail is more rectangular and split into eight tentacles. Oh, and those suckers on the tentacles are the final touch! 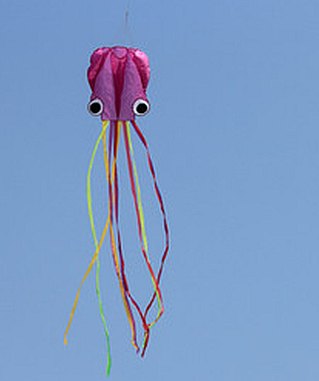 Kite designs come and go though, so the simple flat octopus is not a common sight. Not that it ever was, really.

Manufacturers (or their go-to designers!) have now come up with 3D octopus kites that look somewhat similar to the huge show kites. Cunningly though, the tails are just ribbons. They're not tubes stitched down the whole length, thus saving a significant manufacturing expense.

Mind you, the visual effect in the air is still attractive to kids. There's more fluttering than writhing if you get my drift. But from a child's point of view, the overall effect is close enough to the look of the Big Boys Toys of the air!

In a similar vein, I have also designed a 3D octopus. On the spectrum of such kites, perhaps it sits between the kiddie ones and the mid-sized kites mentioned earlier. More on this in the next section. 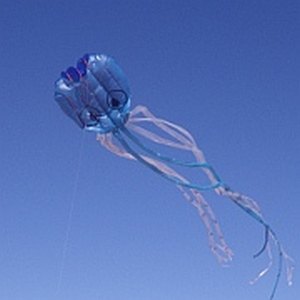 Some time ago I did a series of soft kite designs. The idea being that you could whip one up quickly from just plastic sheet and tape, then get out there and fly it. It was a very cheap approach that produced reasonably durable kites.

Some of the designs would eventually fail if flown too long in fresh wind and hot weather together. High strain and softening adhesive would lead to slippage of the tape. But if you avoid that weather combination, one of these should return many hours of enjoyment. In any case, making another kite from the same instructions always goes much quicker than the first effort. Plus, you get to try another color combination for the panels, if you want to :-)

The MBK Parachute, by the way, has seemed bomb-proof in all weather so far!

The crowning glory of the Soft Series would have to be the MBK Octopus I would say :-)  It was a blast seeing the final prototype doing its thing hundreds of feet over a beach, tails a-writhing. It was at a decent line angle too, it should be noted. Have you noticed that the really big ones have quite modest flight angles? They're just too fat and draggy to fly steep like a well-made delta, or even at 50 degrees like the MBK Octopus.

There's our homemade MBK Octopus kite in action, in the video below: